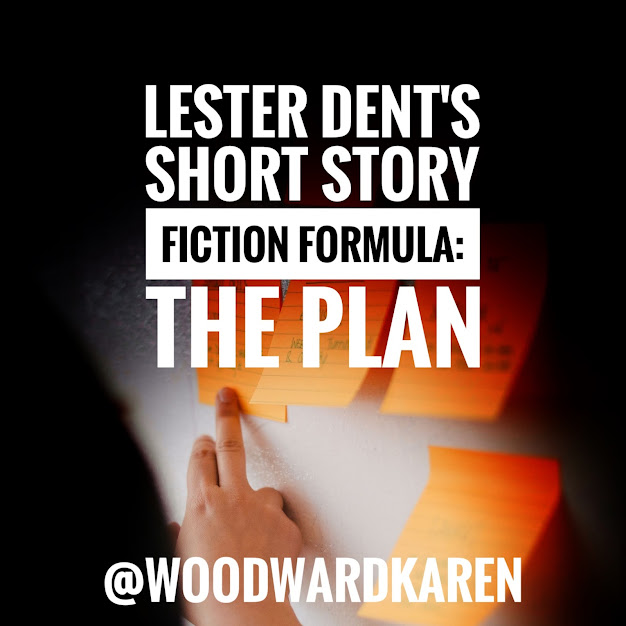 This post is part of a series on Lester Dent’s method for writing a short story. You might think: Why should I care? Well, all the short stories Dent wrote using this method sold! Now, I suspect that his sales might have had more to do with his skill as a writer than it had to do with any formula, but still!

In the next few posts I will use Lester Dent’s method to write a short story, or at least to outline one. I’ve decided to make it a murder mystery! Also, I will be incorporating some of my own understanding of what a short story is, how it’s structured. In other words, while I am going to try and stick as closely to Dent’s method as possible, there may be a bit of difference here and there.

Lester Dent tells us that, before we begin writing our murder mystery, we should try to make a few decisions. Namely we should:

1. Choose a murder method.
2. Decide what the villain wants, what his goal is.
3. Pick a setting.
4. Decide on the protagonist’s motivation. As Dent puts it, we must craft, "A menace which is to hang like a cloud over the hero." [1]

For those of you who are dyed in the wool pantsers--that is, those of you who do not find outlines helpful--if you want to skip this step, that’s fine. But I hope that a few pantsers will take this as a challenge. I’m sure that not everything Lester Dent recommends will be for you, but something might.

"A different murder method could be--different. Thinking of shooting, knifing, hydrocyanic, garroting, poison needles, scorpions, a few others, and writing them on paper gets them where they may suggest something. Scorpions and their poison bite? Maybe mosquitos or flies treated with deadly germs?

"If the victims are killed by ordinary methods, but found under strange and identical circumstances each time, it might serve, the reader of course not knowing until the end, that the method of murder is ordinary.

"Scribes who have their villain's victims found with butterflies, spiders or bats stamped on them could conceivably be flirting with this gag.

"Probably it won't do a lot of good to be too odd, fanciful or grotesque with murder methods.

"The different thing for the villain to be after might be something other than jewels, the stolen bank loot, the pearls, or some other old ones.

The murder method should be UNIQUE and, if we can do it without sacrificing verisimilitude, EXAGGERATED. Let’s brainstorm.

Here are a few possibilities:

Again, although there are, ultimately, relatively few general things folks murder for (love, money, power, and so on) the particular motivation is--or at least should be--unique to your villain.

Lester Dent describes what the villain is after as treasure. I don't know whether he's being literal or employing metaphor. Perhaps a bit of both. Whatever the villain's ultimate goal--for instance, let's say it's revenge--there's going to be a physical manifestation of that goal in the story.

For instance, in Star Wars IV, Darth Vader wanted to defeat the resistance and the physical manifestation of that desire was the destruction of the rebel's base on Yavin IV.

When I first saw Star Wars--a local theatre was showing the first two films back to back--I thought the Death Star was truly sinister. It destroyed planets! It was a roving, moon-destroying bully. That was a new spin on an old theme.

Ideally, the setting will be suggested by (a) the murder method and (b) the villain's goal. You'll want something that stands out, that captures the imagination.

"Unique locale? Easy. Selecting one that fits in with the murder method and the treasure--thing that villain wants--makes it simpler, and it's also nice to use a familiar one, a place where you've lived or worked. So many pulpateers don't. It sometimes saves embarrassment to know nearly as much about the locale as the editor, or enough to fool him."[1]

On an unrelated note, love that name, "pulpateer".

Dent doesn't write much about this point except to say that it is "a menace which is to hang like a cloud over the hero".

If you’re wondering how to picture motivation, here’s what I do. Imagine a rowboat heading toward a small desert island. Chasing the boat is a big, vicious shark. The shark is snarling (I’m not sure sharks can snarl, but let’s just say it is ;) and a bite sized chunk has been taken out of the rowboat. It’s not going to be able to stay afloat much longer. The shark is the rower’s motivation and the island--specifically, reaching the island--is the rower’s goal.

Generally a character's motivation is linked to the stakes present in the situation.

Failure: The shark reaches the rowboat and flips it over. The rower dies.
Success: The rower gains the island and lives.

Okay, so, we’ve gotten an overview, we know the rough outlines of what ideas Lester Dent advises we work out before we sit down to write. I’ve promised that I would create an outline for a story as we go along, but I don’t want to post it here because I doubt everyone would be interested.

If you would like to see how I set up the hero’s motivation, and so on, I’ve put the document up on my Google Drive. Here’s the link if you’d like to take a look:

Outline of my cozy murder mystery.

Whew! We're through the preliminaries. We now know what the murder method is, what the villain's goal is, we know the setting and we understand the stakes. (By the way, Dent says that you really only have to know two or three of the above points before you start writing. Even if you know one of them you're ahead of the game.)

Next time I'll talk about the actual writing. Dent broke a 6,000 word story into four equal parts. Next time we'll look at the first quarter and discuss the opening line and how we, in Dent's words, need to "swat him [the hero] with a fistful of trouble."