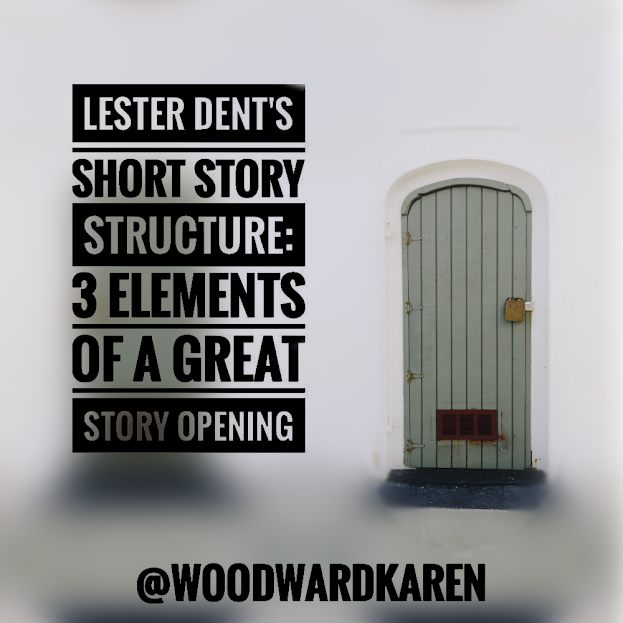 I’ve been writing a series of blog posts on Lester Dent’s Short Story Structure and realized that I had more to say about story openings than would fit in there. So!

Here’s what Dent wrote about what made a story opening strong:

“1--First line, or as near thereto as possible, introduce the hero and swat him with a fistful of trouble. Hint at a mystery, a menace or a problem to be solved--something the hero has to cope with” [1]

This, then, is Dent's advice for how to hook a reader:

That’s fine, but how does one do this in practise?

What do you think of this opening?

“I'd never given much thought to how I would die—though I'd had reason enough in the last few months—but even if I had, I would not have imagined it like this.”

That’s the first line of the prologue from Twilight, Book 1. I know you may dislike Stephenie Meyer’s books, and fair enough. They aren’t everyone’s cup of tea. But that opening clearly satisfies (1), it puts the protagonist in a LOT of trouble, so much that she feels her death is inevitable.

The prologue is a flash-forward. And, yes, a flash-forward can be tricky, but I think Meyer pulled this one off. Because of it we know what the end stakes are, we know where she is headed. And we care about her more since she would willingly die in the place of someone she cared about.

Here's a quick summary of the first few paragraphs of Twilight: Bella, a teenager, is going to live with her dad in a town she detests. But, of course, there’s a twist. She is going willingly.

“My mother drove me to the airport with the windows rolled down. It was seventy-five degrees in Phoenix, the sky a perfect, cloudless blue. I was wearing my favorite shirt — sleeveless, white eyelet lace; I was wearing it as a farewell gesture. My carry-on item was a parka.

“In the Olympic Peninsula of northwest Washington State, a small town named Forks exists under a near-constant cover of clouds. It rains on this inconsequential town more than any other place in the United States of America. It was from this town and its gloomy, omnipresent shade that my mother escaped with me when I was only a few months old. It was in this town that I'd been compelled to spend a month every summer until I was fourteen. That was the year I finally put my foot down; these past three summers, my dad, Charlie, vacationed with me in California for two weeks instead.

“It was to Forks that I now exiled myself—an action that I took with great horror. I detested Forks.” (Twilight, Stephenie Meyer)

We see the protagonist, Bella, travelling into exile to live with her father who she thinks of not as “dad” but as “Charlie.”

Rather than her parents dragging her off to live somewhere she detests, she is going voluntarily because she loves her Mom and she realizes that she and her new husband need to be alone for a bit. She sacrifices herself. This is Dent’s (3). Only Bella can make this sacrifice.

Not only is Bella’s sacrifice unusual--one generally doesn’t expect this unselfishness from a teenager--but it is admirable. And we’re curious. Why? Why are you doing this? Sure it is admirable--but why are you doing it? I wanted to know more about this Bella person. That’s Dent’s (2). We are handed a mystery. Perhaps a smallish mystery compared to those that are introduced later, but it is enough to get us reading the next sentence. And the next, and the next (and so on).

I challenge you to read the first few paragraphs of one of your favorite stories. What is it about those paragraphs that made you care about the characters? Are Dent’s criteria met? Is the protagonist put in some kind of trouble? Is a mystery raised? Must the protagonist be the one to solve it?

Sometimes it also helps to note the point of view. Is the story written from the first person perspective? The second? Third? Each of these has its peculiar strengths and weaknesses.

I will resume my Lester Dent series soon. It has been taking me longer than expected because I am  using it to write an action-adventure (at first I tried writing a cozy mystery, but Dent’s structure just wasn’t made for that). I’ll publish the next installment of the series next week.

In the meantime, have a great week! I’ll see you again next week and, as always, good writing. 😀