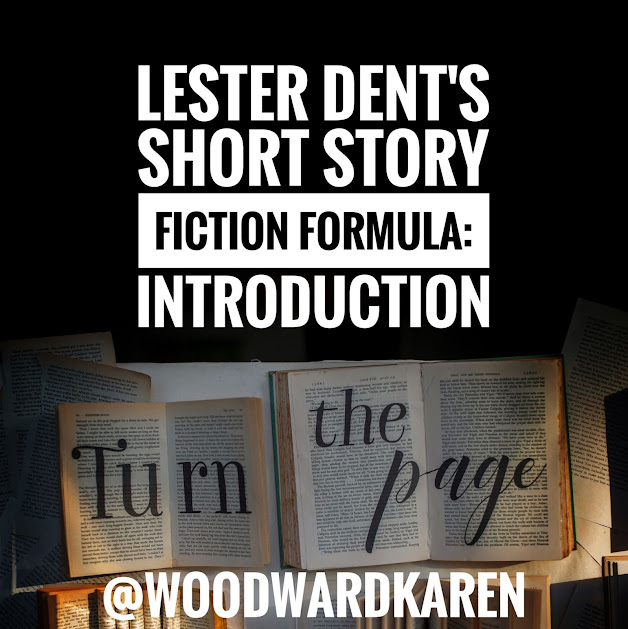 Lester Dent was perhaps the best of the pulp-fiction writers of the 1930s and 1940s. He created the hugely popular character of Doc Savage--a scientist and adventurer--and featured him in 159 novels over the span of only 16 years, averaging about 10 novels per year! Wow.

I don’t know anyone who has matched that output. It is a shame that the novels--I believe all 159 of them--weren’t published under his own name. The publishing house he worked for, Street & Smith, published them under the name Kenneth Robeson.

Given his incredible output it isn’t surprising that Dent had a certain pattern, a certain formula, he followed.

"This is a formula, a master plot, for any 6000 word pulp story. It has worked on adventure, detective, western and war-air. It tells exactly where to put everything. It shows definitely just what must happen in each successive thousand words.

"No yarn of mine written to the formula has yet failed to sell."[1]

A note on writing formulas: The unreflective use of a formula tends to create unconvincing stories. But, naturally, one needn't use a formula unreflectively. After all, the challenge to write a story in, say, 280 characters or less is a kind of formula, but limitations often encourage creativity rather than squelch it.

Personally, I'm not going to argue with a man who wrote 10 books a year for 16 years! Books that, during the depression, allowed him to not only enjoy a good standard of living but buy a yacht and sail around the world. Even if I don't agree with everything he said or did, I believe Lester Dent has something to teach us.

I think the answer comes by way of Robin Yocum, who I chatted with recently. Robin mentioned that he plans a book chapter by chapter, approaching each chapter as though it were a short story. (This also helps him write in small snippets of time. It can be impossible to keep the structure of an entire book in one’s head, but quite doable for a short story.) For example, a 90,000 word story could be composed of 15 chapters or sections of 6,000 words.

Part 1: “...hit your hero with a heap of trouble.”
Part 2: Double the trouble.
Part 3: The hero is in so much trouble that all hope is lost.
Part 4: Get your hero out of trouble in a clever way your reader could have foreseen but doesn’t.

Rule One: Character introduction. Make sure all your main characters have been introduced by the end of Part 1.

Rule Two: All the storylines (A, B, C, etc.) should be introduced by the end of Part 1.

I will post a brief overview of all the parts of the series, and then launch into the series. I thought it would be fun to try and write a story--or at least a story outline!--as we go along. So, please! Think of what kind of murder we should have. We will need clues, a mentor, a sidekick and an interesting, quirky, protagonist. Leave a comment or contact me over at Twitter (@woodwardkaren). In the meantime, good writing!