How to Write a Genre Story: Character Introduction: Empathy 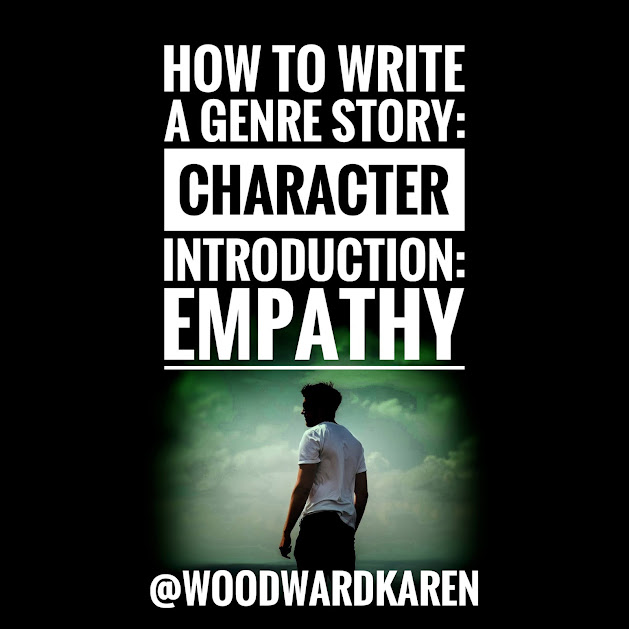 The end goal of character creation, the Holy Grail, is for your reader to feel empathy for your character.

Creating empathy for your character

The problem: I can’t will myself to have empathy for a character anymore than I can will myself to be happy! And I certainly don’t have a magic pen that I can wave to create empathy in my readers. Writing a character people love--or love to hate!--is a dark art.

BUT, as we have seen, there are things--like exaggeration, unusual position, and verisimilitude--that can increase the chance that your reader will emotionally bond with a character.

If I could use an example. Happiness is wonderful, but one cannot simply will oneself to be happy. Also, there’s no list of things one can do that will guarantee happiness. That said, there are activities one can do (eat ice cream, take a long stroll on a beach, and so on), states of mind one can cultivate (focus on a goal, don’t have unrealistic expectations for oneself, and so on), that will increase the chance that one will be happy.

In the same way, there are things we can do to encourage a reader to love a character.

The Key to Creating Empathy: Sequels

“Like V-Factor [verisimilitude], empathy takes time to build and it relies heavily upon the skilled use of sequels.” (Characters, Jim Butcher)

(By the way, I’ve written about sequels in my blog post: Parts of Story: The Structure of Sequels.)

In writing, especially genre writing, stories are made up of an unbroken string of scenes and sequels.

Scenes are where the action happens. It is where the protagonist clashes with an antagonist, whether this clash is verbal/intellectual, mental or physical. In the sequel--which is a place where characters and readers alike can take a breath between scenes--we see the characters reveal themselves, their inner persons, through how they respond/react emotionally to the set-back (or victory) they experienced in the previous section.

It is by seeing the characters REACT that we get to know them, get to know the kind of people they are. And here’s the trick that isn’t a trick at all, it’s just a basic fact of human nature: How a person responds to a setback is a large part of what makes us admire them, love them. Or despise them, hate them.

It is in the character's response to the setbacks of life that WHO SHE IS shines through.

Think of it this way. I’m old enough to have thought (when I was a teen) oh this is what I would do if such and such happened. For example, if I caught my boss stealing his employees tips, or if I saw my neighbour being robbed, or … well, you get the idea. And then, as one goes through life, those boxes get ticked off, some of those things, things that I was so sure I knew how I would react to, actually happen. And sometimes I didn’t react at all as I thought I would. My emotions weren’t what I thought they would be. Things that I thought would make me angry made me cry and vice versa. As a result I learnt about myself.

Okay, now we’re getting into it. In a sequel order is important. (I write about this a bit in “How to Write a Genre Story: Character Introduction: Verisimilitude.”)

The Structure of Sequels

There are different possible structures for a sequel.

Here’s how I think of it:

I wrote about the instinctive emotional reaction in my last post, the one on verisimilitude.

Think of burning your hand on a hot stove. You react and your hand moves away from the burner before you realize what happened.

Think of the first time you felt betrayal. Perhaps your significant other told you they had been cheating on you with you best friend for the past 20 years, or perhaps you found out your business partner emptied your joint bank account of millions of dollars and fled the country. I doubt either of those apply to you, but we have all been betrayed in both big and little ways. Think of one time you felt betrayed. What was your immediate reaction?

If you’re anything like me at first I had an almost physical reaction, it was like a punch to the gut. I couldn’t catch my breath. There was an odd dislocating sensation, it was as though I had been kicked out of the ordinary world of my normal existence.

THEN, in the second stage, the emotions come. Emotions like pain, disbelief and anger. Then perhaps resentment and the desire for revenge. But these emotions are what I call cognitive in the sense that they are your reactions, your emotions, where for the first few seconds or minutes, you just felt the shock, like static electricity, wash over you.

After the first wash of emotions sweeps over someone, they start asking questions like, “How did this happen? Why did this happen? This involves looking back at their world and noticing how that world has changed. You thought your partner was working together with you for your mutual good when, instead, he had been lying to you. Now you wonder: How was it really? How--why--did I allow myself to be fooled, what happened? What did I do wrong? How could I prevent this from happening in the future?

Next, our fictional someone looks ahead and says, perhaps with a sigh, Okay, THAT happened. Now what?

Well, there’s rarely only one possibility. If my business partner made off with the company’s money it might look something like this:

Possibility 1:
I could hire someone, perhaps a PI, to get the money back, or try to get it back myself.

Passibility 2:
Forget about the loss, write it off. He’s gone, forget him. I’ll earn the money back.

There are more possibilities but you get the idea. Which possibility our fictional person chooses will tell you a lot about her, it will begin to reveal to you the kind of person she really is.

This brings us to…

Make sure the STAKES (what the character has to lose) and the potential REWARD is clear.

We must cash out each possibility in terms of what the hero would risk and what they stand to gain, what are the potential drawbacks and benefits?

Your reader must be crystal clear on what the personal cost and potential reward is for each contemplated course of action.

It’s important--crucial--that the hero has a goal. A goal gives the hero a way to order possibilities, the good and the bad.

Tradeoffs are great for creating tension. Let’s say that Possible Action A would get the hero the closest to his goal but it would mean violating one of the principles he lives by.

Does the hero want to achieve his goal so much that he is willing to violate the code that has structured his life and has made him the person he is? Or will the player abandon his goal and so stay true to the principles he lives by?

This is a difficult decision and what he chooses to do will tell us a lot about him.

Goal: Save a young child from an evil villain who would do nasty things to her.
Principle: I keep my word. Always.
Cost: Hero would have to break his word if he is to save the child.
Dilemma: If you keep your word you will have to allow the young child to die.

Goal: Find your soulmate, the lost half of your true self.
Principle: Keep the secret of your strength/power.
Cost: The cost of being accepted by your soulmate is that the hero would have to make himself vulnerable, he would have to place himself at the mercy of someone he isn’t sure he can trust.
Dilemma: The hero has a secret that he mustn't share. If he shares it, then another will know how to weaken him and he could die. But he has fallen in love and his love is telling him: You don’t trust me! If you truly loved me, you would trust me. Share your innermost secret with me and I will know that your love for me is true.

So, what will the hero do? Will he choose the way of trust and acceptance of what he hopes is true love or will he stand by his principle and say, “You can accept me as I am or not at all. Your choice”?

Each choice a character makes will affect how your reader feels about him.

In my last example I was of course drawing from the biblical story of Samson and Delilah, but the writer could resolve this conflict however they wanted. Perhaps the girl is forcing the hero to choose because she has been charged by the hero’s enemy to get his secret and doesn’t love him. Or, perhaps, she has been burnt before and simply wants to know that the man she loves would trust her with his life and she really would die before she gave up the hero’s secret.

Well, that’s it! This is the last post in my mini-series on character introductions. Also, I’m nearly at the end of blogging my book. If you have a topic you would like me to write about, please do suggest it! Leave a comment or contact me on Twitter: @woodwardkaren. Good writing!