How to Write a Genre Story: Character Introduction: Unusual Position 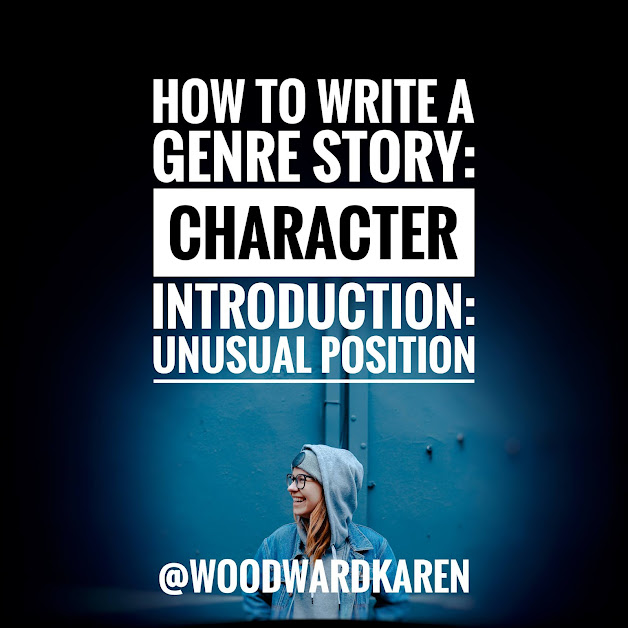 Today I continue my series on how to create a memorable character.

In my last post (How to Write a Genre Story: Character Introduction: Exaggeration) I went over Exaggeration. In this post I would like to chat with you about what Jim Butcher refers to as “Exotic Position,” but I’m going to call, “Unusual Position.”

“Locating your character in an unusual location or situation is another way to help create immediate interest. ... A sentence about a young woman sitting in a chair is far more blah than a sentence about the first female shuttle commander maneuvering in her EVA frame in high orbit.”

Here are the first three paragraphs of J.R.R. Tolkien’s Fellowship of the Ring:

“When Mr. Bilbo Baggins of Bag End announced that he would shortly be celebrating his eleventy-first birthday with a party of special magnificence, there was much talk and excitement in Hobbiton.

“Bilbo was very rich and very peculiar, and had been the wonder of the Shire for sixty years, ever since his remarkable disappearance and unexpected return. The riches he had brought back from his travels had now become a local legend, and it was popularly believed, whatever the old folk might say, that the Hill at Bag End was full of tunnels stuffed with treasure. And if that was not enough for fame, there was also his prolonged vigour to marvel at. Time wore on, but it seemed to have little effect on Mr. Baggins. At ninety he was much the same as at fifty. At ninety-nine they began to call him well-preserved; but unchanged would have been nearer the mark. There were some that shook their heads and thought this was too much of a good thing; it seemed unfair that anyone should possess (apparently) perpetual youth as well as (reputedly) inexhaustible wealth.

“‘It will have to be paid for,’ they said. ‘It isn’t natural, and trouble will come of it!’” (The Fellowship of the Ring, J.R.R. Tolkien)

Everything about Bilbo and his surroundings is unusual. Bilbo Baggins lived longer than was normal for hobbits. And not only that, as his years stretched out, he showed no signs of aging! Also, he was extraordinarily rich as well as adventurous--in fact, his travels abroad had made him a local legend! And of course we’re talking about hobbits, a population of people who are completely unaverage in all sorts of ways, including their diminutive height.

b. Put an exceptional character in an ordinary position.

“Naturally there's the inversion of this, too, where you take a very unusual character and put him in an utterly mundane position, like Mister Incredible working in Insurance Cubicle Purgatory.” (Characters, Jim Butcher)

“Harry Tasker leads a double life: to his wife Helen and his daughter Dana, he is a boring computer salesman often away on business trips, while in actuality he is a secret agent for a U.S. intelligence agency named Omega Sector whose motto is 'The Last Line of Defense.' ” (Wikipedia)

Butcher doesn’t go into detail about these variants, but here’s my interpretation:

An unusual social position, so something different from the average. Some of these are tropes, the commoner who is really royalty, the fey child unwittingly raised by human parents, and so on.

Everything is relative. What would be considered unusual to Americans--a trip to Reykjavik or Honolulu--would be ho-hum to the people who lived there! Visiting Mars or The Moon, today, would be unusual but perhaps in 500 years it will be commonplace.

I think that Sherlock Holmes’ intellectual position was quite different. He was a genius. Perhaps he would say that he just noticed things other people didn’t and understood what he noticed. Perhaps it’s the same thing.

This one I’m not sure about. Perhaps it would involve taking an extreme moral stand? Someone who cannot, or who refuses to, tell a lie no matter the cost? A monk or a nun who lives in a religious community? Someone who has vowed to never harm another creature?

We, as humans, are interested in the unpredictable--or at least the unpredicted--because it can kill us--because, by definition, we can’t prepare for it. We are on the lookout for things that violate our expectations, our understanding of the world. This is true for our story worlds as well.

Think about your life, what memories, events, come to mind? For myself, I remember when I came in third place for the high jump in elementary school. That event stands out because I wasn’t (and this is a charitable way of putting it) a top student in Physical Education. I was definitely more of a nerd than a jock!

Going back over my personal memories--especially my early memories--there is something emotional involved with all, or at least most, of them. For example, receiving an unexpectedly wonderful gift at Christmas or someone breaking their word about something I cared very much about.

As humans, we need to remember the exceptions, the things that aren’t as we would expect. When, in real life, we come across these things we need to understand them and incorporate them into our world view.

I’ll close with an example.

One of my favorite characters in Jim Butcher’s The Dresden Files series is a dog named Mouse.

Physically, Mouse is impressive. He is a Tibetan Temple Dog (which in The Dresden Files is a rare breed) and is absolutely massive, standing waist high to Harry, and Harry is 6’9’’ tall!

Intellectually, Mouse is exceptional. My impression from reading the series is that he is much more intelligent than the average human. Harry Dresden is the Watson to Mouse’s Holmes--though that’s not quite right because, although Mouse might be smarter, Dresden is a powerful and wiley wizard.

Mouse’s origin is unusual. He is thought to be a descendant of an ancient Foo spirit. In Blood Rights a litter of puppies had been stolen by someone evil and Dresden had been commissioned to get them back. But one, Mouse, chose to stay with Harry and stowed away in his car, the Blue Beetle.

Okay! That’s it for today. I tried to get this post out on Monday but, well, better late than never! :-) Good writing! I’ll talk to you again on Thursday.