How to Write a Genre Story: Character Introduction: Exaggeration 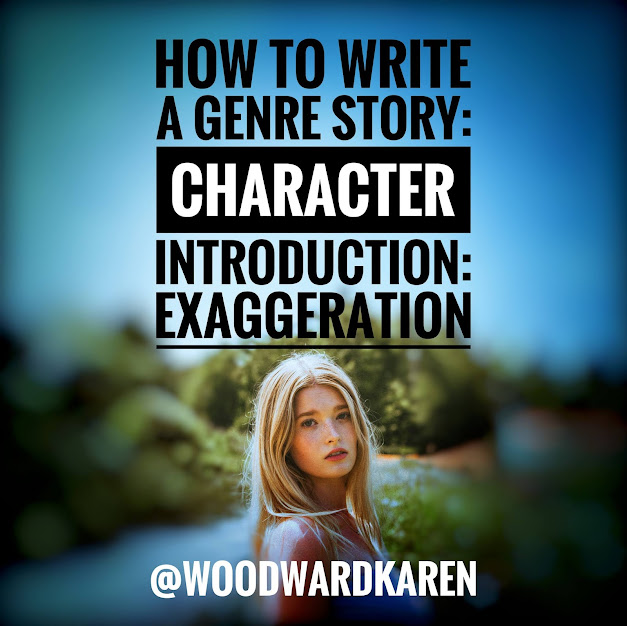 You never get a second chance to make a first impression. Today I want to talk about character introductions.

First, an acknowledgement. This post is inspired by Jim Butcher’s post, Characters, where he goes into all this in great and glorious detail.

Second, when I write, “a character,” what do I mean? I like what Jim Butcher has to say about this:

“Maybe your people look like sentient renaissance mice, or maybe they look like talking cats, but there are going to be beings running around your story with a bunch of conflicting desires. Those are your characters.” (Characters, Jim Butcher)

Characters must be interesting.

We all know that characters must be interesting. I mean, of course!

Jim Butcher gives five characteristics that make a character interesting. I’ll list them and go over each one.

We’ll go over each of these starting, today, with Exaggeration.

Exaggerate something, some feature of the character.

Physical: Big nose, striking blue-white eyes, enormous height, and so on.
Mental: Extremely smart, clairvoyant, telekinetic, and so on.
Emotional: An extreme and irrational fear, extreme courage/bravery, and so on.

i. Exaggerated traits are more interesting.

We are hard-wired to pay attention to exaggerated characteristics. Jim Butcher gives the example of two different situations and then challenges his audience to ask themselves which situation is the most interesting. What follows is roughly based on Butcher’s example.

Imagine an ordinary path with oak trees that reach out to each other over the path (this forms a green tunnel of sorts) and an ice cream shop at the end.

Situation A:
An average sized man walks down the path, under the tree branches and enters the shop.

I’m more interested in the second character because there is nothing to the first. The exaggerated trait by itself, though, isn’t all that interesting. It only becomes interesting when it comes into contact with an environment that is calibrated for people of ordinary height.

Note: This reminds me of what I wrote about in my post about settings, specifically that the setting is the crucible for your character. It’s rarely the characteristic in itself that is interesting, it is that characteristic in conjunction with an environment. For more on this see my blog post, How to Write a Genre Story: Setting and the Hero's Journey (Part 1).

I’ve found that exaggeration does help recall. I have a book to recommend, “Moonwalking with Einstein: The Art and Science of Remembering,” by Joshua Foer. Foer goes through the history of memory techniques, the role of memorization in history as well as how to improve one’s own recall.

Anyway, in that book Joshua Foer notes that (this is an extreme simplification) to remember something--say the capital of Delaware, Dover--it helps if it is associated with an image. The idea is then to recall this image, and have the image act as a memory prompt.

One thing Joshua Foer stresses is that it helps recall if the image depicts something that is exaggerated. Here’s the key I think, the brain doesn’t notice things we expect to see, but it will notice something it doesn’t. The exaggerated is, by definition, unexpected.

“SECOND, it's a device to create an acute mental awareness of your character for the reader. Remember that the goal of this kind of story-craft is to create that virtual world inside your reader's head. The reader is glad to help you along with that. I mean, readers will provide a lot of the background sets and extras and so on if you give them a chance--but one way to make it easier for them to get into the story is to create a clear impression of a character on them, so that they always have a clear image in their head of who that character is. Exaggeration helps with that--it gives the reader something unusual and memorable to associate with any given character.”

Well said! I’ll leave you with that. Have a wonderful weekend! I’ll talk to you again on Monday. Good writing!