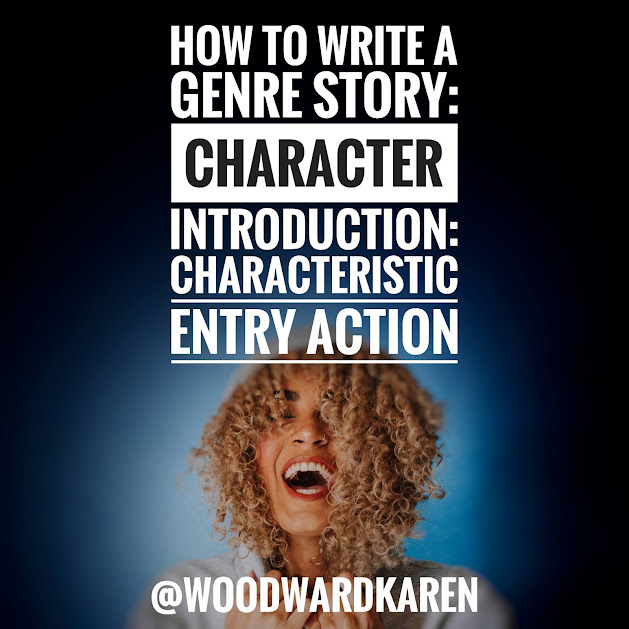 Do you remember the first time you introduced your Significant Other to a parent? There are few things in life you need to get right the first time but that’s one of them! Another one is introducing your protagonist to your reader.

What makes a character introduction work? What needs to be communicated?

“...it is critical to make sure you get the bare bones of your character into his [the reader’s] head immediately.”

By “the bare bones of your character” I think Butcher is referring, at least in part, to what I’ve been talking about in previous articles in this series: character tags. (For example, see How to Write a Genre Story: Characters: An Introduction to Character Tags)

Sorry for using a long quotation, but Jim Butcher hits the nail on the head here. I can’t say it better or more clearly.

“A solid CHARACTERISTIC ENTRY ACTION consists of introducing your character to the reader by bringing him into the story in the course of an action which clearly, sharply typifies who and what he is.

“Lethal Weapon 2 starts off in the front seat of a stationwagon during a police chase, with Mel Gibson howling in excitement and pounding on the ceiling while Danny Glover fumbles for the siren, tries to talk on the radio, and tries to convince Mel that they don't really need to be doing this. It strongly establishes both characters as cops. It demonstrates Mel's love of wild action, Danny's cautious approach to his work, and the relationship dynamic between the two. (I liked it so much that I borrowed shamelessly from it to start off Grave Peril.)

“Every Bond Pic that opens on the "opening mission" template does the same thing: it shows you Bond being a heroic spy and engaging in lots of danger and action.

“Your character is a frustrated high school nerd? Then have him come on stage late for his school bus, which promptly drives away even though the driver obviously saw him coming. (IE, Spider-Man.) Your character is a titanic lumberjack? Then start him off towering over the north woods and felling fifty trees with each swing of his axe.

“Make the introduction count. This is something you can't afford to screw up.” (Characters, Jim Butcher)

An Example: Riggs and Murtaugh from the Lethal Weapon series

I just rewatched the start of Lethal Weapon 2 (sometimes I love doing research! ;). It was epic! It sets up Martin Riggs as a reckless thrillseeker, interested in going after bad guys regardless of the price to either himself or those closest to him. And then there’s Roger Murtaugh, Riggs’ partner. Murtaugh is an excellent foil for Riggs. He overthinks things where Riggs underthinks them. Murtaugh has a loving wife and family, Riggs is alone. Murtaugh is patient and careful, Riggs is impatient and careless. And all those qualities come out right at the start.

As for what Riggs and Murtaugh’s character tags are, I would say that one of Riggs’ tags is what I’ll call his ‘crazy face’: those insane wide eyes coupled with that almost Joker like grin. Also, Riggs wears casual clothes while Murtaugh wears a proper suit with a red tie. These nicely help to both indicate each man’s character as well as help us remember it.

Another example of a (literally) kick-ass Characteristic Entry Action is how the character of Trinity was introduced in The Matrix (1999). She appears to defy the laws of physics as she methodically, quietly, dispassionately kills those who have been ordered to arrest her. This establishes her as an outsider, a rebel. Further, she clearly possesses knowledge and abilities beyond what seems possible for humans.

I know I’m dating myself by saying this, but the first time I saw The Matrix was in the theatre. I don’t think anyone breathed during that opening sequence. It’s, hands down, the best I’ve ever watched. And it gave us a very good sense of who Trinity was and, by extension, who her companions were, what they were like and what her role in the story was.

A. Get the essential characteristics of your protagonist (or any major character) into your reader’s head as quickly as possible.

B. Make these essential characteristics interesting! (An unique object that is a bright color or an object--like a wizard’s staff--that can do unusual and unpredictable things, a low laugh that is tied to Bad Things Happening, and so on.)

C. Especially if you’re writing a genre story, be sure to make at least one of the traits exaggerated along either a mental, physical or familial dimension.

By the way, I know that some of the tags I’ve mentioned can seem like cliches, but I think that whether people groan when they read a story about a wizard and his staff depends on the writer making that particular wizard unique. One way to do this is for the writer--you--to use your own memories, your own particularity, as a lens through which the reader can see the character. Since you are unique, this will guarantee that your stories will be unique. And, of course, they will also have your voice.

As an exercise pick someone in your life and make a character of them. What are their strengths? What are their weaknesses? Now tweak these traits so that they are extreme. (You never have to tell them you’ve done this!)

For example, one of my friends (I went to school with him) is very smart and open to new experiences (that’s one of the personality dimensions). This means that his tagline in life could be stated as: ‘Boundaries? What boundaries?’ His nimble mind and his readiness to explore alternative possibilities have given him a few good stories over the years.

If I were to create a character based on my friend I would make him as brilliant as Sherlock Holmes but in every story he would hold a different eccentric theory about how the universe really is. But he would also find a way to test the theory and, if it didn’t hold up, he would change his beliefs. And I would try to tie that theory, or the testing of that theory, into whatever it was that cracked open the case for him.

Oh, and he’d name all his children from characters in his favorite books. I think I would give him seven children. They would be adults and live all over the world. Perhaps a different one would be his Watson in each story. Or something.

That’s just a silly example, but perhaps it will inspire you to think how you could help merge the universal (I think my character will be a detective…) with the particular (...and he will be based on my experience of my friend.)

Until next time, good writing! I hope you are having a wonderful weekend.