How to Write a Genre Story: Character Introduction: Verisimilitude 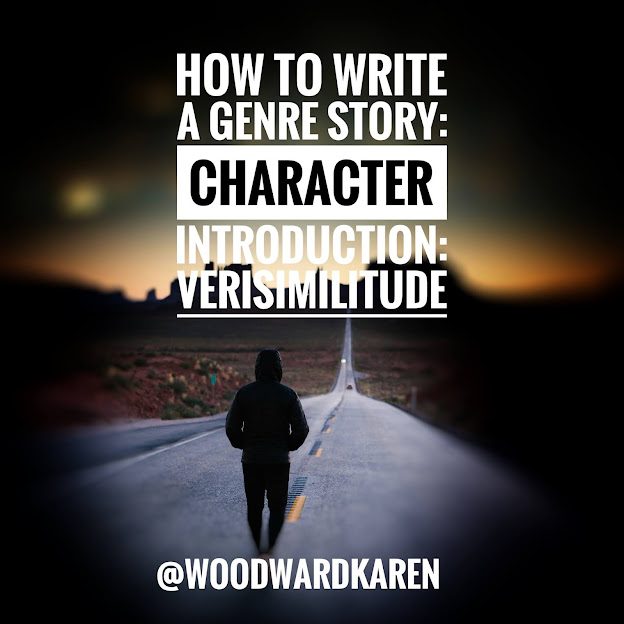 This post continues my mini-series about how to introduce a character. I’ve already written about Exaggeration, Unusual Position and introducing characters in Action.

Today I’m covering Verisimilitude and later this week--I’m aiming for Thursday--I’ll close the series off by writing about Empathy. Here are links to my previous posts in this mini-series:

(Here is an index to all the blog posts in my soon-to-be written book: How to Write a Genre Story)

Verisimilitude. No, that’s not an exotic disease.

“The most exotic character in the world becomes nothing more than an annoying cartoon figure if he doesn’t behave in a consistent and believable manner.”

As an example, Butcher mentions Jar Jar Binks. As you likely know, Jar Jar was first introduced in the first of the Star Wars prequels, The Phantom Menace.

It seems as though the character of Jar Jar checked most of the right boxes. He definitely had exaggerated and unusual traits and he was introduced in a way that helped make him memorable. But then WHY were Star Wars fans' reactions to him so mixed? Jim Butcher thinks that it is because, at least in part, Jar Jar didn’t have a consistent and believable manner. To paraphrase Butcher, the V-force was not with him. (Sorry, couldn’t resist!)

How to give a character verisimilitude

I think there are two things that make a character feel real.

First, as we have seen throughout this mini-series, you give the character tags and traits that illustrate who they are. Further you make at least one or two of these traits exaggerated, unusual.

Second, a character’s V-factor has to do with HOW you communicate a character’s emotional reactions. That’s what Jim Butcher focuses on and that’s what I’ll talk about, below. Here I just want to note that if this sounds similar to the pattern of a sequel, I would agree. This is the very same pattern. And it is enormously important.

Think of when you’ve encountered a sudden setback. What happens? Well, myself, I’m hit with a wall of pure, raw emotion. There’s no thought, not yet. It’s sort of like when I touch a hot stove (and, yes, I have been that idiotic, ‘Gee, I wonder if it’s hot yet.’) My hand started to move away from the burner before I felt the pain. Then I had a reaction which was, “Wow, touching a hot burner was a really bad idea.” Finally I made the decision to not do that again.

That’s perhaps a silly example but think of any sudden, negative, shock you’ve had. A significant other suddenly breaking up with you, hearing that you’ve been betrayed, and so on. Human beings have a reaction to those sort of things and it happens in a particular order. If that order isn’t right your readers probably won’t notice it but, still, it won’t FEEL right to them.

So. Jim Butcher lays out the three stages:

In one of Jack Bickham's books he gives an example of a person coming home from work and, as they usually do, he calls out, “Honey I’m home!” But he is met with the silence of an empty house. Puzzled he looks around and spots a piece of paper on the hall table. He walks over and looks at it.

It’s a note from his wife. She tells him that she has been having an affair with the grocer for the past year and that she has left him.

What is his first reaction? EMOTION. A wave of emotion, of pain and regret. He’s not thinking about anything. There’s a chair nearby and he slumps into it because he doesn’t want to fall down.

But what should he do? He could try to get her back, try to track them down. He could hire a private detective to find them. Perhaps the grocer had pressured her, perhaps he had blackmailed her. Even if not, perhaps he could win her back. But does he really want to do that? Perhaps he should let her go her own way.

The man presses bloodless lips together and makes a DECISION. To hell with her. He will scrub her from his life, from his memory, from his heart.

You see the pattern. If we had the decision before the emotion, it wouldn’t be credible or if the man had the reaction after the decision that wouldn’t make sense. You might be thinking, “Well, yeah… Did you really have to tell anyone that? Isn’t it obvious?” And, sure. On one level it is, but it is something that writers can get wrong and then the character doesn’t feel real.

Well! That’s it for today. I’m trying to keep to a schedule of putting out a blog post on Monday and publishing my interview with a marvelously interesting writer on my YouTube channel on Tuesday. Tomorrow I will upload my chat with a singularly fascinating individual, Lydia Moore.

I hope you have a wonderful week, I'll talk to you again on Thursday. Good writing!