How to Write a Genre Story: Make Your Character Memorable & Unique: Tags 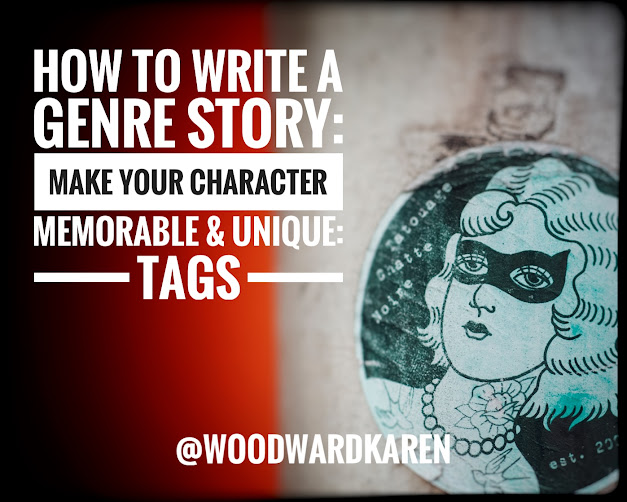 In a previous post, How to Write a Genre Story: Characters: An Introduction to Character Tags, I talked about why tags are important for characterization (essentially, it is because they help describe someone in a memorable way). For example, when Hercule Poirot’s green eyes glow--like a cat’s!--we know his little grey cells are working overtime, we know he has either solved the mystery or is very close. In other words, we know a lot that hasn’t been written.

Today, I would like to drill down into what kinds of tags there are.

"Diction" refers to a speaker's "distinctive vocabulary choices and style of expression"[2] and can be used as a tag to tell one character from another.

When Edith Wharton writes that a character was "Dragging his words along like reluctant dogs on a string,"[1] she is talking about a character's diction.

Here are a few descriptions of diction:

"He [Edmund Wilson] spoke in a curiously strangled voice, with gaps between his sentences, as if ideas jostled and thrashed about inside him, getting in one another’s way as they struggled to emerge, which made for short bursts," Isaiah Berlin, New York Times Book Review, April 12, 1987

A character might use the word "sir" repeatedly or use slang terms such as "awesome," "brilliant," "dude," and so on. (Also, the words one uses, especially slang, can be a nice way to indicate age or social group.)

Accents can help to differentiate characters but I would advise caution, it is easy to overdue them.

The same can be said for “jargon.” Most professions--the police, lawyers, academics, doctors, and so on--have words unique to the discipline.

Google tells me that a mannerism is a “habitual gesture or way of speaking or behaving; an idiosyncrasy.”

Here are a few examples:

Mannerisms are one of the more commonly used tags. Also, many of them have the advantage of involving action.

I’ve written about tags of attitude in my post, How to Write a Genre Story: A Character's Dominant Attitude, so I won’t go over them here except to say that, just as I would characterize a flesh and blood person as a cheerful person or a grumpy person or an angry person, so characters have an attitude that characterizes them; Dwight V. Swain calls this the character’s Dominant Attitude. This attitude will be the lens through which both they see the world and the window through which the world sees them.

In order for a characteristic/tag to help us remember a character, it must be unique to that character. So it would be potentially frustrating for a reader to read a story with two characters who looked nearly identical--except, of course, if that was important to the plot.

I think the first rule of writing is, “Write clearly.” Part of this is having characters who look memorably different from one another.

Examples of tags of appearance. Harry Dresden is the main character in Jim Butcher’s Dresden Files series. Harry is Chicago’s only wizard to advertise in the yellow pages! He is out of the magical closet, saving damsels and wreaking havoc. Three of Harry’s tags of appearance are his black duster, his wizard’s staff and his immense height (6’9’’).

Let’s say one of your characters, Alfred, is a caterer. At some point in your story Alfred will show that he knows something about cooking, shopping, balancing books, and so on.

On the other hand, if Alfred was a spy then he would know how to tail someone without being detected, how to tell when he was being tailed, how to lose a tail, how to plant a bug, how to pick locks, and so on.

In the above examples cooking, shopping, knowing something about accounting, how to plant a bug, pick locks, and so on, are all tags of ability.

Dwight V. Swain writes: "Failure to provide Character with the ability to perform as required believably can destroy--or make--a story."

As with everything, though, there are exceptions. For example, if your protagonist is a new spy he might be really good at some things, like tailing someone, but horrible at others, say lockpicking. Imagine that your protagonist knows he’s terrible at lockpicking. This means that when he goes out into the field with a team he would be terrified that he will be asked to pick a lock. Perhaps this fear makes him distracted at just the wrong time and something else terrible happens. Or whatever.

My point is that you can do anything you like with tags, it just has to make sense given the context.

As I’ve mentioned, because tags are unique they help make characters memorable. If Jim is the only one of your characters who has greenish-blue eyes, and if those glacier-like greenish-blue eyes are tied into something about his character--or, to put it another way, a tag of attitude [3]--(‘his eyes are as cold as his soul’ or something slightly less cheesy!) then when the character is reintroduced after the absence of a few pages or chapters and glacial eyes or cold eyes are mentioned, not only will that particular character be brought to mind but you’ll also remember something about his personality, his essence.

In the following, Jim Butcher writes about how to create a good villain but, of course, what he writes applies to any major character:

"A good villain needs to be instantly recognizable to your reader, so that even if he hasn’t appeared in a hundred pages, your reader will recognize that character instantly. You can achieve this pretty effectively using Tags and Traits, identifiers for a character which reserve particular props, personality traits, and words to associate with any given character."

Note: The above quotation from Jim Butcher was included in my article, "How to Build a Villain."

You can read more about what Jim Butcher has to say about tags and traits over at his livejournal blog. Here is an index I put together.

A word about traits

I haven’t talked much about traits because, the way I understand it, traits are tags that are dispositions. That’s confusing, so let me unpack it.

That said, my disposition to like coffee and have four or so cups a day is going to manifest in my life in various ways. For example, I always have my favorite oversized red mug sitting close to my left hand whether or not it is filled with the luscious liquid. My desk may have some coffee grinds scattered around it from grinding the coffee beans and I can easily reach my french press, an object that enjoys pride of place on the bookshelf behind me. In this little tale, my red coffee bug, the scattered coffee grinds and the French press would be tags that bring my trait (my liking-of-coffee) to mind.

Here’s another example. Let’s say a character, Herbert, hates cats. His hatred of cats is a disposition, a trait. But we can’t look at Herbert and see, “Oh, yes, he is obviously a cat hater.” (Sure, we could just tell our readers, “Herbert hates cats,” but that’s telling not showing. It’s better if readers get there on their own.)

So, given that we can’t see Herbert’s hatred of cats, how do we get this across to readers? Well, with tags. Herbert might have a chihuahua. The little dog is very cute but--although he gets along fine with all the other dogs--he goes completely insane when he sees a cat. Herbert smiles at this and says, “Good doggy.” So the tag, here, would be a behavioral tag: the dog's aggression toward cats, and only toward cats. We might go on to explain that Herbert is violently allergic to cats and has to carry around an epipen. He hates being allergic to cats, he hates having to carry around an epipen and constantly worry about dying because a damn cat might decide to jump up on him. In this case, Herbert’s epipen could also function as a tag.

Does that make sense? If not, please let me know!

That’s it for today. As always, thanks for reading. Good writing. I’ll talk to you again on Thursday.

1. Coming Home, by Edith Wharton.
2. Diction, Wikipedia
3. I talk more about this in my post, How to Write a Genre Story: A Character's Dominant Attitude.