How to Write a Genre Story: A Character's Dominant Attitude 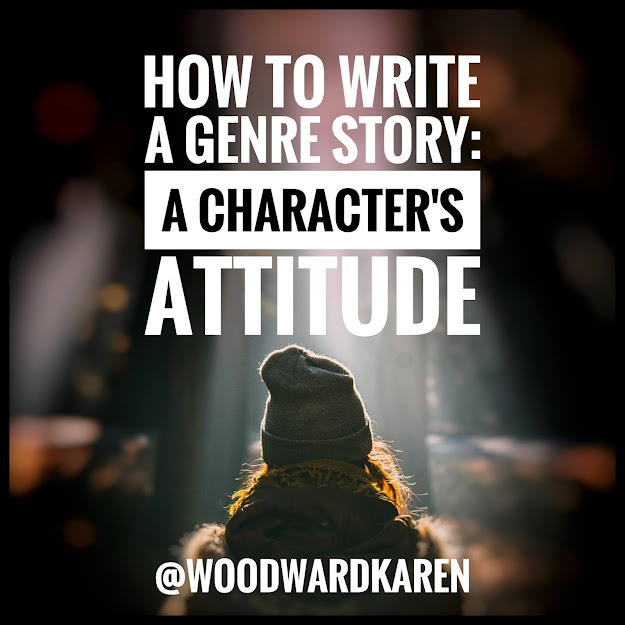 “Attitude is a matter of behavior patterns—a character’s habitual way of reacting to a particular kind of situation. Mary Poppins’s eternal cheeriness reflects an attitude, and so does Rambo’s macho stance.” (Creating Characters: How to Build Story People, Dwight V. Swain)

Other examples of attitudes: sanctimony, ingrained suspicion, anxiety, discontent, and so on.

I was at a party the other day and fell into conversation with someone I knew slightly. This wasn't the first time we'd met, but it was the first time we had a chance to exchange more than awkward pleasantries.

After a minute or so my impression of him was fixed: he was not a person who suffered fools gladly. It was an observation that didn't set me at ease since I was keenly aware that what constitutes a fool in someone's mind can be distressingly relative. Anyway, if he was a character I was writing, that would be his dominant attitude.

Keep in mind that our characters are pseudo-people and so tend to have less subtlety than their flesh-and-blood counterparts. For example, if a character's primary attitude is fearfulness, then that trait, that quality, will find a way to insinuate itself into everything that character does.

If a character--Mr. Midgley--is, say, irascible then he might snap at other characters over minor slights or inconveniences. As a response to this, other characters might gossip about him. This character’s house would be the one school children are gently but firmly steered away from on Halloween.

An irascible character can be kind or considerate, but there would have to be a reason. It would require an explanation. For example, perhaps one of the neighborhood children--Sarah--reminds him of his estranged daughter and so he has a soft spot for the child. He's sentimental. It's his daughter’s birthday so he bakes his daughter's favorite cookies--chocolate chip with extra chips. Then he sees Sarah creep hesitantly, fearfully, onto his back lawn to retrieve a baseball that has landed in his flowerbed. Something about the sight makes it hard for him to swallow and he wipes his eyes with a tissue. Rather than bawl her out for trespassing he goes out and gives the child a cookie. An unlikely friendship is forged.

Here's another example, this time from the TV show Friends. I would say that Monica Geller's primary attitude was obsessive compulsiveness when it came to cleaning. Informally, we would call her a neat freak. Everything had to be just so or she'd clean and scrub and rearrange until it was. Monica didn't need a reason to clean, no explanation was required. If she didn't clean up a mess, THAT would require an explanation.

One last example: Mr. Monk from the TV show Monk. I would say that Mr. Monk's primary attitude was fearfulness.

Mr. Monk was obsessive compulsive and he had an uncanny knack to remember even the most minute, irrelevant detail about his environment. He was also scared of just about everything. Even milk. Milk! One reason that show was a success was that, in practically every scene, the screenwriters demonstrated Monk's primary characteristic--fearfulness--and tied everything else to it. Then, at the end of nearly every show, the writers had Monk do something that for him was courageous. He had goals he was driven to attain--becoming a detective again, figuring out who killed his wife, protecting a friend--and was temporarily able to overcome his many fears. So, really, the most terrified man in the world was courageous.

Once you've picked a character's dominant attitude it should be reflected in some way in nearly every scene.

Dwight V. Swain writes, “...you’ll need to become aware of the special areas of mind and thought that your story brings into focus.

“You can do worse than to term this collective pattern your character’s dominant attitude.” (Creating Characters: How to Build Story People, Dwight V. Swain)

“Thus, in a romance, Female Lead’s dominant attitude very well may center on the way she sees—and, in action, reacts to and behaves towards—men. Are they dominating bullies, like her boss? Frail reeds, in the manner of her hopeless, helpless uncle? Eternal womanizers...? [Are they] [s]hadow images of her boastful, bragging brother?…. Stalwart partners for a lifetime of warmth and peace? (Creating Characters: How to Build Story People, Dwight V. Swain)

In a science fiction story the dominant attitude of the protagonist might be one of ingrained suspicion. In keeping with this attitude he might believe that the human race is doomed to extinction at the hands of an alien race. He feels/thinks that, because of the aliens’ technological superiority, that our only hope is to ‘acquire’ their technology before they have the opportunity to crush us.

In a suspense novel, perhaps the protagonist’s dominant attitude is one of distrust. He looks at his fellow humans either as perpetrators--those who take advantage of others--or victims--those who are taken advantage of by others. Because of this belief he becomes withdrawn, leaves society and goes to live all by himself in the hills.

In a mainstream novel, the protagonist might have the dominant attitude of cheerfulness, she believes that there is good in everyone, even the most hardened murderer. Because of this belief she becomes a psychologist and opens a rehabilitation center for hardened criminals.

So you see the pattern. A character has an attitude which, in conjunction with a belief, contributes to the character having a goal. The conjunction of the attitude with the belief might even suggest a way of achieving the goal.

Above, I’ve mentioned a belief.

I haven’t written much about what this belief is, where it enters into things. It seems as though the belief encompasses that character's view of what the best way to live one’s life is. Perhaps the character’s attitude stems from this belief, or perhaps the belief is a result of their attitude. Who knows!

In my last example the belief (or worldview) the protagonist had was that, "Good is in everyone," and the course of action she took based on that view was to get a degree in psychology and open a rehabilitation center.

At some point I would like to write a blog post about a story’s theme, what it is and its importance to making a story riveting. It seems to me that a character’s dominant attitude would tie them into the theme of the story, or--to put it another way--set the theme of the story. I need to think about that some more.

That’s it! As always, I’d love to know your thoughts. 😀

Good writing. I’ll talk to you on Monday.