How to Write a Genre Story: Dwight V. Swain and the Dominant Impression 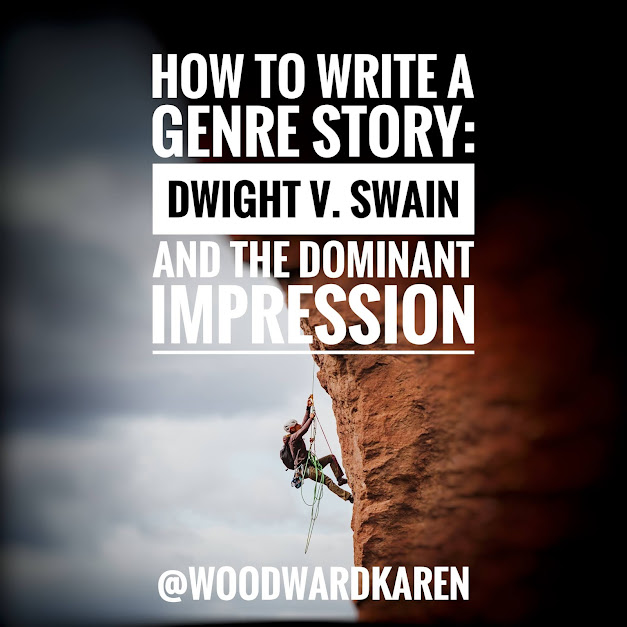 "A tag is a label, but a limited, specialized label. It identifies a character and helps your readers distinguish one story person from another." (Dwight V. Swain, Creating Characters: How To Build Story People)

Tags or labels are important because they are a practical, concrete way of making a character memorable.

(Here’s a link to an index I put together for Butcher’s posts about writing: Jim Butcher On Writing.)

The noun of vocation isn’t necessarily what a person does for a living. Many people define themselves by their skills AND their passions and not just in terms of what they do to earn a living. For example, a struggling actor who doesn’t yet make enough to pay the rent may pay rent by being a server, but they think about themselves as an actor. Or not. It’s up to you and what you want to say about the character.

A tag is like a shorthand for something else. “His eyes were a shade of blue that made me think of bones bleached by the sun.” In this example, light blue eyes would be a tag. For a tag to be of use, though, it needs to be unique to your character (I’ve written about this in my last post).

Before we get too far along I want to talk about how I’m using the word “tag” or “label.”

Each tag--and a character’s gender, age, vocation and manner are all tags--identify a character uniquely. Swain uses Kojak as an example; that character's tags were his ever present lollipop and his shaved head.

A tag as an object or characteristic

A tag can be something like an object that is always--or very nearly always--associated with them. For example, in Jim Butcher’s The Dresden Files series, Harry Dresden’s black duster or his rune carved staff. Or, as I just mentioned, it can be the color of a character’s eyes, as long as it is unusual and unique.

A tag as a disposition

A tag can also be something one can’t see, something more like a disposition. Think of love. You can get into an argument with someone you love and want to strangle them. Perhaps you even berate yourself for thinking that going out with them that first time was a good idea! But you haven’t really fallen out of love with them, you’ve just had a spat. Love is a disposition. It is something that is there through the lows as well as the highs.

Another example: Sherlock Holmes hated to be bored, that was a disposition. We can see instances of him being bored, but we can't see the disposition itself.

Dispositions can be called to mind through the use of tags. For instance, the needle Sherlock Holmes used to inject his seven percent solution of cocaine could be used as a tag. In the beginning of a story we might find Sherlock resting in his favorite chair with a syringe lying on the table next to him. That one image, even though static, would give the reader a lot of information about the current state of the character.

Dwight V. Swain writes that the adjective of manner is, “...an individual’s personal bearing; his or her habitual stance and style.” For example, if I describe someone (this is Swain’s example) as “loud and pushy” this conveys a lot of information about their personality. This is the sort of character description we want. Yes, it’s important to let the reader know the color of a character’s hair and eyes, and so on, but summing up their essential character quickly and memorably is more important.

Another thing to note is that adjectives of manner are dispositions, which is the second kind of tag I wrote about, above.

Putting this together, let’s combine an adjective of manner with a character’s noun of vocation.

This gives you the thumbnail description: grumpy server. It conjures up an image. Sure, it needs to be filled out--as it is we are dealing with a two-dimensional character--but it gives us a start, it can serve as a kind of summary of a character, a hook to hang other qualities from.

“Make the surly cop a sloppy cop or a forthright cop or friendly cop or worried cop, and he becomes a totally new person. Frequently such switches can even be parlayed into intriguing, character-defining, contradictory touches that add extra interest. Let happenstance throw the wise-cracking secretary into contiguity with the long-faced undertaker...” (Dwight V. Swain, Creating Characters: How to Build Story People.)

That made me think of the secretary (Janine Melnitz) and the scientist (Dr. Egon Spengler) from Ghostbusters (1984). That combination worked!

Okay, that’s it! Currently I'm publishing a post on Monday and Thursday. On Tuesday I will publish a new interview on my YouTube channel. This week my video will feature poet and prose writer Kevin Gooden. Kevin and I chatted about his experience with the Gotham Writers Workshop, which was overwhelmingly positive, how to write a good cover letter as well as how one's own life experiences can enrich one's writing.