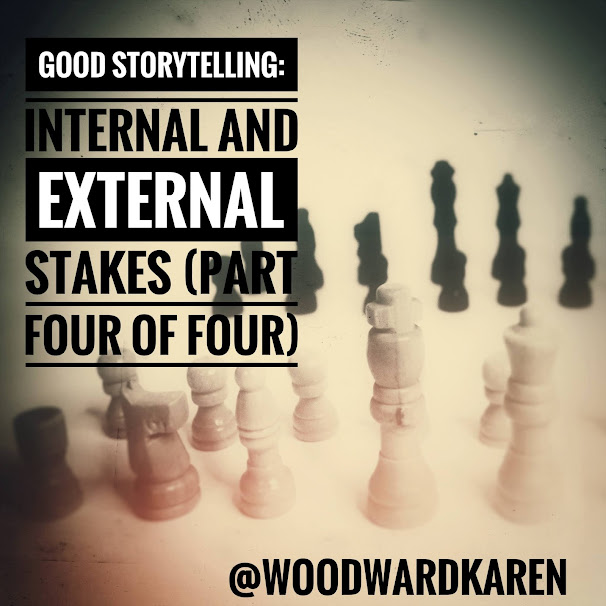 As I’ve mentioned previously in this series, in the movie Shrek the protagonist's internal conflict, his challenge, was to risk rejection and let people past his defenses, to let others know how he really felt. Specifically, his internal challenge was to tell Princess Fiona he loved her. Shrek needed to risk rejection so he could make connections with her and find true love.

If Shrek failed to lower his internal defenses and let people in, he would have lost the love of Princess Fiona and endured a sad and lonely existence in his now vacant swamp which would have made it a pyrrhic victory.

It's not the size of the stakes that count, it's their complexity. Complex stakes involve not just a character's internal or external goals, but both together. It's not just about saving the world, it's about overcoming one's fears so that one can save the world.

Stories contain compcolications. The hero sets out to do one thing, a complication pops up and blocks him, he tries to get around the complication by doing something else but that only makes things worse, and so on. The stakes escalate throughout the story until everything comes to a fever pitch at the end.

In Raiders of the Lost Ark, there's a terrific scene in the middle where Indy ducks into a tent to hide from the bad guys and comes across Marion tied to a tent pole. Indy begins to untie Marion then realizes that if the Nazis discover her missing they'll know he is in the camp looking for the ark. If he frees Marion he will give himself away and fail in his quest. What does Indy do? He ties Marion back up! She's furious with him. It's a great scene.

Let's take a look at the stakes at play in this scene.

Indiana's stakes at the beginning of the scene:

Indiana’s goal: Escape the guard's notice and obtain the ark.

What success would look like: Indiana doesn't get captured and is one step closer to his goal.

What failure would look like: Indiana is captured, possibly tortured. He fails to obtain the ark.

Marion's stakes at the beginning of the scene:

Marion’s goal: Get untied, sneak out of the Nazi camp, go to America.

What success would look like: Marion gets her freedom.

What failure would look like: Marion's future is unknown. She could be tortured, various nasty things could happen to her.

In the middle of the scene the stakes change when Indy realizes he has to tie Marion up or risk losing the ark.

Indiana's stakes in the middle of the scene:

Indy's goal: To find the ark and for Marion not to hate him.

What success would look like: Marion's forbearance and a possible future together.

For Indy to succeed in winning Marion's affection--or just to avoid making her furious with him--he must help her escape. But he can't. Not now. If he helps her, then he risks his primary mission. So he fails to achieve this minor goal, accepts Marion's wrath, ties her back up and exits the tent.

The point is that conflicting mini-goals with their own stakes often pop up within a scene. I thought the above scene was especially interesting. It highlights Indy's and Marion's diametrically opposed interests. Marion would much rather just escape and forget all about the ark, but recovering it is Indy's primary goal.

I hope you have enjoyed this series! If you have any comments or questions, please get in touch. Either leave a comment or reach out to me at karenwoodwardmail (at) gmail (dot) com. Thanks! Good writing.