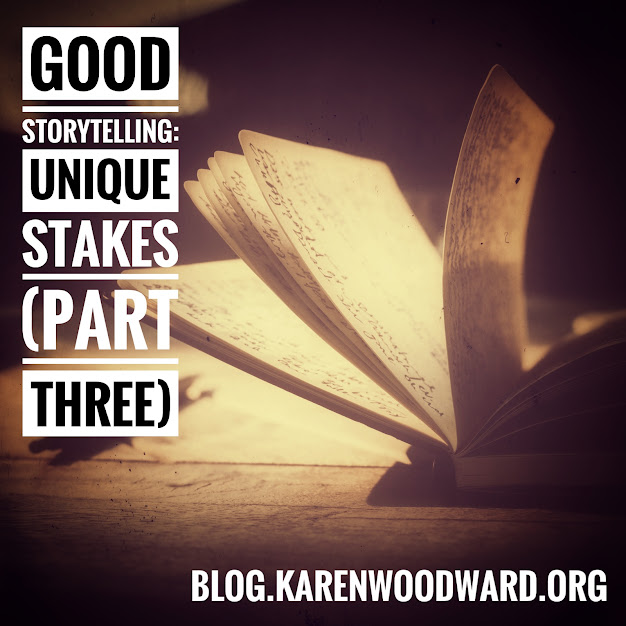 This is Part Three of a mini-series. This part can be read on its own, but if you would like to read the first two parts they are here:

Quick review. Each character has a goal. For example, in Star Wars IV, Luke Skywalker wanted to destroy the Death Star. After all, anything called a Death Star probably needs to be destroyed!

What will happen to a character is based on whether she achieves her goal. Those are the stakes. Think of gambling. If I place a bet on my team to win the Big Game then the stakes of the bet are the amount of money I could gain or lose. In Luke Skywalker's case, when he prevented the Death Star from blowing up the rebel's base on Yavin IV the resistance was preserved.

Sure, Han Solo was an accomplished pilot and Obi-Wan Kenobi was a Jedi skilled in controlling the force, but Luke--while he did have the capacity to be both these things--wasn't there yet.

And that these (becoming a better pilot, becoming a Jedi) were his goals said something about him, they made him unique.

That's what I mean by unique stakes.

Here’s a trick I learned:

If you’re not sure what desires drive a character, ask: If this character won an obscene amount of money, what is the first thing she would do with it? Would she rush to the bank to make an investment? Would she fly with 20 of her closest friends to Vegas? Would she buy a house? Would she get married? Would she give it all away to charity?

In Luke Skywalker’s case the answer is easy: he would take care of his aunt and uncle and then go offworld to the Academy and learn how to fly all sorts of aircraft.

What does your character fear? When he was a kid what kind of beasties lived under his bed?

Sherlock Holmes was not fond of being bored, he required a difficult, interesting puzzle to solve.

Luke feared letting his aunt and uncle down. He also feared being bored, being trapped on a planet where nothing exciting ever happened.

A character’s wants and fears tie them to their goal

In Raiders of the Lost Ark Indiana Jones is terrified of snakes. And of course snakes are found in any dungeon or ancient temple worth the name.

Luke is scared of turning to the dark side of the force like his father did.

In The Matrix, Neo is scared that Morphius will die because he, mistakenly, believes that Neo is The One. Of course it turns out that Neo IS The One, and Morphius doesn’t die, but that was the fear that motivated Neo to act.

It’s good when a character’s wants and fears tie in with their goal--which, for the protagonist is the story goal--but we write for wonderful people, our readers. We want to draw them into our story.

This is another advantage of writing a genre story. For example, if you’re writing a romance story you know what your reader will want to feel. She will want to vicariously fall in love along with the protagonist, have a good cry with her when it doesn’t work out and then have renewed hope at the end when the lovers get back together.

If you’re writing a horror story the reader is going to want to be terrified.

For example, in William Goldman's wonderful story, The Princess Bride, why did Inigo Montoya devote his life to becoming a master swordsman? It was because the six-fingered man (Count Rugen) killed his father and Inigo had sworn to avenge his father's death.

So yes, sure, Inigo's goal was to kill Count Rugen but I would argue that, generally, he wanted to do right by his father. The love that Inigo had for his father was the glue that kept him focused on his goal.

What are the stakes for Inigo? When Inigo finally fights Count Rugen it seems as though Inigo is dying, felled by a sneaky, dishonorable blow meted out by Count Rugen. We understand from the very beginning: the stakes of this contest, this battle, are life and death and Count Rugen isn't going to fight fair.

Does the reader think about it that way as well? I don't think so. I think we care much more than Inigo does about his life. Yes, absolutely, we want to see justice done. We want Inigo to complete his quest and kill the dishonorable Count Rugen. But it is also very important to us--much more important than it is to Inigo himself--that he survive.

Okay! That's Part Three of this series. There's only going to be one more part. In the final part I'll talk about internal and external stakes. That's it for now! Good writing.