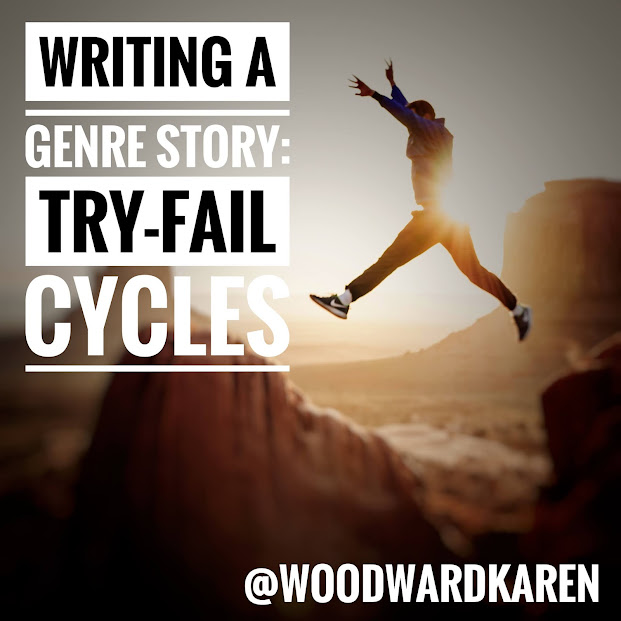 Try-fail cycles are the key to writing engaging prose because they structure conflict in such a way that it creates suspense.

Let’s talk about the nuts and bolts of the try-fail cycle.

For every conflict that comes up, a question can be asked: Will our hero succeed? There are four possible answers:

Let's look at each of these.

People love it when they get what they want but, let’s face it, hearing about how you won the corner office is probably not a story other people are terribly interested in. I love it when I get what I want, but it makes a boring story. “I wanted a new phone for my birthday and then I got one!”

Think of it this way, when families get together at Christmas what's the gossip about? Who got divorced, who lost their job, who is drinking too much. It's about the bad things--or at least the sad things--that have happened to your family, friends and neighbours.

Being told that, “Yes, the hero will succeed,” won't generate conflict. It's not interesting.

Imagine someone told you the following story:

Bruce woke up Wednesday morning with an overpowering desire for waffles. Bruce promptly got up and took himself over to the nearest waffle house and ate a hot, flaky, buttery, waffle. The End.

Even if we give Bruce some motivation, it still doesn't help matters:

Bruce’s wife, Cindy, woke up Wednesday morning with an overpowering desire for waffles. Cindy was seven months pregnant and hadn't had any appetite for the last three days. Her doctor was worried. When Cindy woke up wanting waffles Bruce was overjoyed. "You wait right here," he said, "I'll get you a stack of the fluffiest, most mouth watering waffles you've ever had. Be right back."

Bruce jumped into his car, got the waffles, and gave them to his wife. She scarfed them down in no time and everyone was happy. The End.

A hero needs setbacks because if what he desires were handed to him that would be dull. Let's give Bruce a few obstacles.

Bruce jumps into his car but it won't start. He investigates and discovers his battery is dead. Bruce heads over to the neighbor's house hoping he'll help jump start his car but his neighbor isn't home.

Bruce peers through the neighbor's window hoping the man just fell asleep on the couch. Instead of seeing his neighbor--an ancient relic who shuffles about, his underwear sagging dangerously--he sees an attractive young woman he doesn't recognize. She's moving around the living room putting valuables into a sack.

His neighbor is being robbed!

Bruce tries to call the police on his cell but can't get a signal. He wonders if he should bang on the window or say something to the intruder to scare her off. As Bruce ponders this the woman turns and sees him. She is startled and screams something at him that Bruce can't hear through the thick glass. She pulls a gun from her pocket and points it at him.

Bruce is terrified. How had a simple errand to get waffles turned into a scene out of Die Hard?

That's not as boring. I might be able to do something with that. And it's all because we didn't give the hero what he wanted.

By setting up goals and obstacles and making Bruce hop from one to the other, getting in more trouble each time he fails, the story becomes more interesting. Why? Because character is revealed through adversity.

Answering the question, "Will the hero get what he desires?" with "No" is almost as bad as answering it with, "Yes." We don't want to see our heroes fail. We want to see them triumph over adversity, or at least make some progress toward triumphing.

Bruce woke up Wednesday morning with an overpowering desire for waffles. Bruce tried to drive to a waffle house but his car wouldn't start. Dejected and waffle-less, Bruce climbed back into bed. The End.

This is very common. Not only doesn't the protagonist fail to achieve what he set out to do but another complication is thrown in his path. The question is: will Bruce get a jump start from his neighbor? The answer: No, AND he has a gun pointed at him.

Your main character has goals, he wants things. But if he got everything he wanted right away then your story would be as entertaining as watching paint dry. The solution: give your main character setbacks. This can be difficult! It is easy for me to get attached to my characters. I want to let them sleep in and eat ice cream, I do not want to create a fire breathing dragon to roast their behinds as they flee in terror. But no one said writing was easy!

In Indiana Jones and Raiders of the Lost Ark, Indiana goes on a quest to find and bring back the lost Ark of the Covenant. About halfway through the movie Indy and Marion escape from the Well of Souls and Indy decides he and Marion must stowaway on the plane the enemy will be using to fly the ark out of the country.

Indy fails in the end (the plane blows up) but the sequence of goals and conflicts are memorable. Let's examine the scene.

Question: Will Indy sneak onto the plane undetected?
Answer: No. Indy is spotted crawling up the plane toward the pilot
Complication: AND a fight begins.

Question: Will Indy win the fight?
Answer: Yes.
Complication: BUT a much bigger man starts a fight with Indy (AND the pilot spots Indy and starts to shoot at him).

Question: Indy is fighting a huge bad guy. It looks like Indy has no chance of winning. Will Indy, against all odds, win the fight against the Man-Mountain?
Answer: No.
Complication: AND the pilot is still shooting at him.

Question: The pilot takes aim at Indy, from this angle he can't miss. Will Indy survive?
Answer: Yes, Indy survives. Marion hits the pilot over the head and knocks him unconscious.
Complication: BUT as the pilot slumps over in the cockpit he hits some levers and starts the plane rolling forward while Indy, on the ground below, fights the Man-Mountain.

You get the idea. The entire scene is well worth watching.

One more thing. The hero’s stakes gradually escalate throughout the scene. At first Indy just wants to board the plane, then he gets into a fist fight, then there's an impossibly huge man he has to fight, then someone starts shooting at him, then the plane begins to move, then there's a truckload of German soldiers who see him, then Marion explodes gasoline containers, then there's gasoline on the ground running toward the fire. At the very end of the scene a pool of gasoline rushes toward the burning gas canisters while the impossibly huge man continues to beat Indy to a pulp. Then the canisters explode and the whole camp, all the bad guys, rush to investigate. It's quite something.

The stakes go from high to higher to very high to insanely high and, finally, to something truly spectacularly high.

Try-Fail cycles are present in every story. The next time you read a book or watch one of your favorite TV shows, pick a scene that captured your imagination and write it out. Dissect it to see how it works, how the effect was created. (It’s okay to dissect scenes, they can be put back together again. Just dust them off, give them a bit of milk and they’re fine. ;)

Thanks for reading! I'll have another post up in a few days, I'm trying for at least one a week. I hope to see you then. In the meantime, good writing!