Free Indirect Discourse: What it is and why you should care 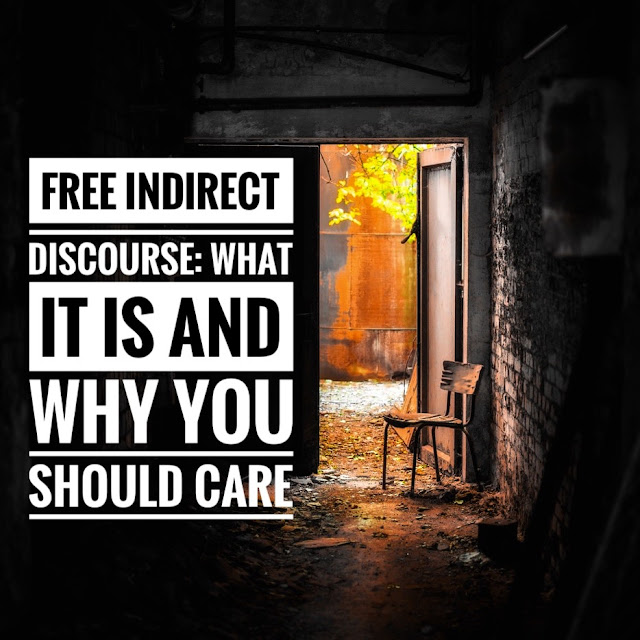 What is Free Indirect Discourse and why should you care?

Do you have a favorite author, one who is able to grab you on the first page, immerse you in their story world and release you only when their tale is over? For me, that author is Stephen King.

That was how I read The Dead Zone, It, Carrie, The Stand and many of King’s other novels. Misery was a bit too much for me -- the scene where fan Annie Wilkes hobbles Paul Sheldon did me in for a while but I couldn’t stay away for long.

My question: How does King do this? How does he immerse readers in his world so quickly and so totally? Here’s what I think: It’s his use of free indirect discourse.

What is Free Indirect Discourse?

Let’s take a look at each of these.

Let’s look at free indirect discourse by contrasting it with different modes of writing:

Quoted/Direct Speech: The child lay on the mat and asked, “Where’s the cat?”

Reported/Indirect Speech: The child lay on the mat and wondered where the cat was.

Free Indirect Speech: The child lay on the mat. Where was the cat?

As you can see, there is no reporting clause in the last example, we are presented with the thought itself in all its naked glory. (Also, the tense is shifted from the present tense to the past tense.)

2. The narrator’s voice intermingles with that of the character.

Free Indirect Speech blurs the boundaries between the character’s thoughts and the narrator’s report. As a result, the reader feels as though they are being given direct, god-like access to a character’s mind, to their motivations.[2]

As Jen Miller writes in her article, “Teaching Under the Dome”:

“Such a technique provides a very useful shortcut for giving readers the personality of a wide range of characters in a short period of time.”[1]

A friend, RLL, recently introduced me to the work of Graham Greene by way of Greene's short story, The Basement Room. What drew my interest was how quickly Greene immersed me in the story, how quickly I bonded with his characters. In fact, my reaction to this story made me think of my reaction to Stephen King’s work.

Briefly, The Basement Room is about a child of seven who is left on his own for a fortnight with only Mr. and Mrs. Baines -- the butler and his wife -- to mind him. The child, Philip, has been looking forward to the freedom this arrangement will bring. Unfortunately, Philip soon learns that Mrs. Baines is worse than an entire gaggle of nannies. She becomes a jailor and he and Mr. Baines are her prisoners.

It seems to me that Greene uses free indirect discourse to overcome some of the limitations imposed by seeing much of the world through the eyes of a young child.

Philip took the slice of Dundee cake in his hand and munched it round the room. He felt very old, independent and judicial; he was aware that Baines was talking to him as man to man. He never called him Master Philip as Mrs. Baines did, who was servile when she was not authoritative.

Baines had seen the world; he had seen beyond the railings. He sat there over his ginger pop with the resigned dignity of an exile; Baines didn't complain; he had chosen his fate, and if his fate was Mrs. Baines he had only himself to blame. (Graham Greene, The Basement Room)

Here it seems to me that we’re not just getting Philip’s thoughts, we’re getting the narrator's -- and possibly the author’s -- as well. Philip’s thoughts seem to be viewed through the lens of a more mature mind.

Here it seems that Greene has deliberately run his character’s thoughts, Philip’s thoughts, together with the narrator’s report in such a way that it is difficult to tell which it is. As a result, we get a more intimate peek inside of both Mr. Baines and Philip.

Let’s look at another example, this time from The Shining by Stephen King.

Ullman stood five-five, and when he moved, it was with the prissy speed that seems to be the exclusive domain of all small plump men. The part in his hair was exact, and his dark suit was sober but comforting. I am a man you can bring your problems to, that suit said to the paying customer. To the hired help it spoke more curtly: This had better be good, you. There was a red carnation in the lapel, perhaps so that no one on the street would mistake Stuart Ullman for the local undertaker.

As he listened to Ullman speak, Jack admitted to himself that he probably could not have liked any man on that side of the desk- under the circumstances.

Ullman had asked a question he hadn’t caught. That was bad; Ullman was the type of man who would file such lapses away in a mental Rolodex for later consideration. (Stephen King, The Shining)

At the end of the second paragraph we get this sentence: “There was a red carnation in the lapel, perhaps so that no one on the street would mistake Stuart Ullman for the local undertaker.” This is obviously Jack Torrance’s thought filtered through the report of the narrator and, because of this, it tells us quite a bit about Jack Torrance and gives us a sense of intimacy with the character.

Here’s another example from the same book:

"Your daddy may not be back until suppertime, doc. It’s a long drive up into those mountains."

"Do you think the bug will break down?"

"No, I don’t think so." But he had just given her something new to worry about. Thanks, Danny. I needed that.

The last sentence seems to be a direct report of the character’s thoughts without a reporting clause. As a result, it has an immediacy, an intimacy, it would otherwise lack. We are, essentially, getting a first person report but with all the flexibility that writing in the third person provides.

I peeked at the books at the top of the New York Times Best Sellers list. Most of them had been written in the first person, but there was one, “Total Power” by Kyle Mills, that began like this:

A light mist condensed on Sonya Vance’s windshield, turning the forested mountains around her into smears of green. Clouds had formed beneath the bridge she was driving across, dense enough that it looked like they would catch her if she jumped.

"Tempting" -- the sole word in the last paragraph -- is an example of the character’s thought merging with the narrator’s voice and, in so doing, it reveals to us Sonya’s mental state. Precarious.

Tips For Using Free Indirect Discourse in Your Own Work

I’ve been scouring my favorite books looking for examples of free indirect voice. It seems authors use it to heighten intimacy with a character who might otherwise not be as transparent (for example, a young child or someone with an unusual viewpoint) or someone unpleasant like Jack Torrance in the Shining.

Also, if you are using a limited third person viewpoint and your character is on the verge of becoming unconscious, using free indirect voice might help add intimacy and richness of detail.

Do you use free indirect discourse? What do you think of the technique?

1. Teaching under the Dome: Life in a Small Town, Characters, and Narrative Point of View, Site: Fantasy Matters

2. Baktin talks about heteroglossia which is the “presence of two or more voices or suppressed viewpoints in a text or artistic work.”

Bakhtin argues that the power of the novel originates in the coexistence of, and conflict between, different types of speech: the speech of characters, the speech of narrators, and even the speech of the author. He defines heteroglossia as "another's speech in another's language, serving to express authorial intentions but in a refracted way" (1934). (Wikipedia, Heteroglossia)