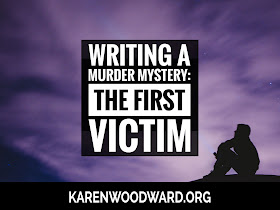 The first murder victim is unique.

Of course talking about a first victim assumes there will be more than one murder victim. True. But, these days, most murder mysteries DO include more than one victim.

And, honestly, I think it’s easier to structure a murder mystery that has more than one murder. I’ll talk more about story structure later on in this series. (By the way, this post is part of a series on How to Write a Murder Mystery.)

Note: I've included this material in my book: How to Write a Murderously Good Mystery: The Major Characters.


1. The first victim brings the detective into the story.


The discovery of the first victim’s body CREATES the Inciting Incident. Regardless of the murderer’s motives, the first victim summons the detective and in this sense they are the reason for everything.

2. Usually, the relationship between the killer and the first victim ties the victims and the suspects together.


In traditional murder mysteries, killers kill for a reason. They have a motive. Since, often, the first victim is the only one the murderer intended to kill, the second, third, etc., victims are killed to tie up loose ends. In this sense, the killer’s motive for dispatching the first victim is either directly or indirectly responsible for all the other deaths.

3. Since the murderer is trying to tie up loose ends, subsequent murders are often more spontaneous than premeditated.


Often, the second and subsequent murders are committed because something went wrong with the first and the murderer is forced to improvise. Or if the first killing was a crime of passion—in other words, there was no plan, the killing was not at all premeditated—the subsequent murders would be done to cover the murderer’s tracks and so could be sloppy and rushed. And THIS—this lack of finesse—could itself be a clue.


The murderer plans for multiple victims rather than just one.

A classic example of this often has to do with a tontine. With a tontine, a number of people contribute to a fund. As each of them die the fund grows larger. When the second to last person dies the final survivor controls the remaining capital. This provided the motive for no end of murders—at least in stories!

Also, although it didn’t have anything to do with a tontine, Agatha Christie’s most popular novel—And Then There Were None—features a murderer who intended to kill absolutely everyone, the entire cast of characters!


I’ve found that in many murder mystery stories, the second, third, and so on, murders usually are a response to factors that unfold AFTER the initial crime.

Often, though not always.

Sometimes the murderer intends to kill two or more people, though even in these cases additional murders can occur as plans unravel and the murderer, panicked, tries to tie up loose ends.

Whatever the case, the murderer is changed by the first murder. He or she is now a different person. This can be shown in a number of ways. After this, the stakes are higher, they wonder if the police suspect them, their stress levels increase. Depending on how good the murderer is at dealing with stress, this could lead to them making mistakes, blurting out information they should have kept quiet about, or doing something rash because they're driven by fear.

In my next post I'll talk more about how to create a murder victim.

Today I’m recommending a book, a murder mystery, I’ve read a number of times. Each time I discovered something new and valuable! I’m talking about Agatha Christie’s most popular murder mystery: And Then There Were None.

From the blurb: “The world's best-selling mystery with over 100 million copies sold! / Ten people, each with something to hide and something to fear, are invited to a lonely mansion on Indian Island by a host who, surprisingly, fails to appear. On the island they are cut off from everything but each other and the inescapable shadows of their own past lives. One by one, the guests share the darkest secrets of their wicked pasts. And one by one, they die…”