The M.I.C.E. Quotient and Mystery Stories 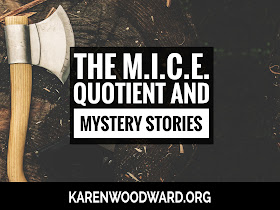 In a murder mystery the detective is usually the protagonist, but not always. For example, in the TV show Lucifer the detective’s sidekick is the main character. Today I want to talk about this delightful inversion of formula with reference to the M.I.C.E. Quotient.

Note: I've included this material in my book: How to Write a Murderously Good Mystery: The Major Characters.

Lucifer and the M.I.C.E. Quotient


Before we get into this material let’s do a quick review of M.I.C.E. (For a more in-depth discussion listen to the podcast: Writing Excuses 6.10)

M.I.C.E. is a way to manage the various subplots in your story. It stands for Milieu, Idea, Character, and Event. Each of these refers to a kind of story. Let’s do a quick review:

(BTW, I’ve discussed M.I.C.E. before: The Mysteries of Outlining and Nesting MICE: Creating Killer Stories and The MICE Quotient: How to Structure Your Story.)


“The milieu includes all the physical locations that are used—one city or many cities, one building or many buildings, a street, a bus, a farm, a clearing in the woods—with all the sights, smells, and sounds that come with the territory. The milieu also includes the culture—the customs, laws, social roles, and public expectations that limit and illuminate all that a character thinks and feels and says and does.” [1]

“The structure of the pure milieu story is simple: Get a character to the setting that the story is about, and then devise reasons for her to move through the world of the story, showing the reader all the interesting physical and social details of the milieu. When you've shown everything you want the reader to see, bring the character home.”[1]


“The idea story has a simple structure. A problem or question is posed at the beginning of the story, and at the end of the tale the answer is revealed. Murder mysteries use this structure: Someone is found murdered, and the rest of the story is devoted to discovering who did it, why, and how.”[1]

Begins: With the posing of a question.
Ends: When the question is answered.


“The character story is about a person trying to change his role in life. It begins at the point when the main character finds his present situation intolerable and sets out to change; it ends when the character either finds a new role, willingly returns to the old one, or despairs of improving his lot.”[1]


“Every story is an event story in the sense that from time to time something happens that has causes and results. But the story in which the events are the central concern follows a particular pattern: The world is somehow out of order—call it imbalance, injustice, breakdown, evil, decay, disease—and the story is about the effort to restore the old order or establish a new one. / The event story structure is simple: It begins when the main characters become involved in the effort to heal the world's disease, and ends when they either accomplish their goal or utterly fail to do so.”[1]


A novel length story (80,000 words or so) often has all four kinds of stories (Milieu, Idea, Character, and Event) nested within each other. The uppermost, 'umbrella' story will be the main story arc. The first subplot (the B-story) will often have to do with the protagonist’s love interest or, more generally, it will be about a relationship the protagonist forms with another character.

M.I.C.E. gives us a way of managing subplots by helping to expose the bones, the skeleton, of a story. In this sense, M.I.C.E. makes it easier to organize any story, but especially long complex ones with many nested subplots.

First, subplots/arcs need to be closed out in the same order they are introduced.

Second, the question that begins an arc, that spins one up, needs to be answered before that arc can be closed.

Third, it works best if the resolution of one subplot feeds into the closure, the resolution, of the next subplot (and/or the main arc).

Okay! I spent longer on M.I.C.E. than I'd intended, but it's a terrific tool to have in your writer's toolbox so I think that's fine. Moving on!


With M.I.C.E. in mind, let’s take a look at Lucifer[wikipedia].

Currently I’m watching the second season. It’s a light comedy populated with interesting, unique, quirky characters. The general structure of an episode is this:

A body is found which leads to the IDEA question: What is the identity of the murderer?

First subplot: This is often a CHARACTER story but it can also be another IDEA story.

For example, in season two episode eight, the main story, the wrapper, is an IDEA story: Who killed Maddie Howard?

This leads directly into the first subplot which is another IDEA story. For example, Lucifer has recognized that Maddie was killed with Azrael’s blade, a magical weapon. This is very bad news because this blade, when used by a human, will drive them to kill over trivial matters (e.g., leaving the toilet seat up, not taking out the garbage, etc.).


Every episode the characters active in that episode each have a story (a subplot) associated with them. Of course the main character's story isn't a subplot, it's the main plot. This is the story that is onscreen, that we—viewers—see played out. For the secondary characters, though, their stories often play out largely offscreen. It's only when their personal stories intersect with the main character's, with Lucifer's, that they come 'on-screen,' that viewers become aware of them.

I thought I'd mention that; it's a slightly different way of looking at exactly the same thing. (It's like this for written stories as well.)

I want to mention one more thing before we get back to the main thread of discussion ...

I've mentioned that each character with significant screentime has a story/subplot associated with them. Each of these subplots can be viewed as either a Milieu story, an Idea story, a Character story or an Event story. For example, Lucifer’s mom (played by the talented Tricia Helfer) is trying to change her role in life. This is why she released Azrael’s blade into the world. She was hoping to get the attention of her ex-husband (i.e., God!) through misbehaving. So, for this subplot to be wrapped up Lucifer’s mom has to either:

a) Find a new role.
b) Willingly return to the old role.
c) Despair and give up.

Further, the mother's subplot is intimately tied into the main arc because the mother finds a new role by hatching a new plot which sends the show off in another direction AND increases the stakes.

Back to the Episode


But the mother isn’t the main character in the inner plot, Lucifer is. So (as I see it) the first subplot is an IDEA story which revolves around the question of whether Lucifer will get the magical blade back.

Midway through Lucifer discovers the first murderer’s name: Duncan. But this doesn't close out the first/main story arc—if it did, that would be a problem—because now someone else has the blade and bodies are continuing to accumulate. All that has happened is that the question for the main arc has been changed/twisted: Who is the new murderer? And the stakes have increased. Now many were killed as opposed to just one.

Eventually the last wielder of the blade is tracked down: Dan Espinoza, Chloe’s ex-husband and someone who is definitely NOT Lucifer’s biggest fan. Lucifer disarms Dan and recovers the blade, thus closing out the main arc.

The Sidekick as Protagonist

Also, when working with Chloe/the detective, Lucifer is usually not intellectually committed to solving the murder; he's busy with his own concerns. He doesn't notice much at the crime scene—not because he can't or he's dim—because he simply doesn't care (which is actually a core trait of the character).

Lucifer's story arc over the course of the episode usually is an IDEA story; specifically, it's a mystery of some sort, though often not a MURDER mystery. Though Lucifer's story arc will be closely related to the primary murder in some way.


M.I.C.E. is a terrific way of helping writers sort through their subplots/arcs. It helps to keep things from getting all tangled up like unruly balls of yarn.

If you want to write a detective story but have fallen in love with your sidekick it’s okay to make the detective’s sidekick your protagonist! The key is to give them their own arc, one distinct from but related to the murder.

From the blurb: “Award-winning author Orson Scott Card explains in depth the techniques of inventing, developing and presenting characters, plus handling viewpoint in novels and short stories. With specific examples, he spells out your narrative options—the choices you'll make in creating fictional people so "real" that readers will feel they know them like members of their own families.”