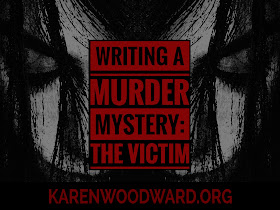 The Victim Injects Passion into the Narrative


I think of the victim as the heart of the story. After all, she was killed. Murdered! That’s passionate. Someone stole her life. And it usually isn’t an act of passion, it’s planned. The murderer intended to snuff the victim out, knowing the stakes, knowing that if he was caught he would be killed or spend the rest of his life in prison. (I’ll talk more about motivation when I discuss the killer.)

Most of the time the passion comes from the victim, not the detective. Think of it: the detective is engaged in solving a bloodless puzzle, deciphering clues to identify the murderer. Myself, I like passionless puzzles! But there is no denying that emotional engagement helps build suspense.

The relationship between the detective and the victim is peculiarly intimate and one-sided. The detective is laser focused, at least in the beginning, on the first victim, on why she was killed, on why the murderer ran such a risk.

The detective is the victim’s champion. Because of the nature of the crime, of murder, the victim no longer walks among us. Nevertheless, it is the detective who must, in a sense, bring the victim back to life until justice has been served.

Information the detective uncovers about the victim:


WHO was the victim?


What was the victim's strongest desire? How did this desire translate into a concrete goal? What were the obstacles to this goal? Where was the victim in his journey toward this goal? Had he, perhaps, denied his greatest desire all his life and then, just before death, decided to follow his dreams?

If the victim pursued his passion who would it have impacted? Whose lives would have been changed? How?

What was the victim’s profession? How did the victim earn his money? Through legal means? Illegal? Was it a profession others admire (doctor) or did it make them feel vaguely uncomfortable (used car salesmen)?

Did the victim have family? Were they married? Single? Did they have children? Were they close with their family (mother, father, siblings, uncles, aunts) or had they drifted apart? What was the victim's last Christmas like?

Perhaps most important of all, how did the other characters feel about the first victim? I've found it works best if the first victim is either loved or hated by most of the suspects. The victim could be hated by everyone except one person (as in Agatha Christie's wonderful mystery, Appointment with Death) who loves them blindly, devotedly; to such an extent one wonders: It can't possibly have been real ... can it?

WHAT about the victim motivated the crime?


It’s often easier to look at what the murderer needed than to ask what characteristics the victim had that motivated the crime, but let's try.

Was the victim wealthy? The child kills parent for her inheritance.

Was the victim hated? Did they set up a ponzi scheme that robbed folks of their life savings?

Was the victim killed to frame someone? The murderer may have had nothing against the victim, the only reason she is dead is that the killer was setting someone else up to take the fall. And so on.

WHY was the victim killed?


Knowing what about the victim motivated the crime is only half the story. The other part of the equation can only come when we know the killer's motive.

So far so good, but it's still not enough. There needs to be some sort of catalyst. Perhaps the murderer's daughter needs an expensive operation or she'll die, and she needs it soon. (I'll talk more about motivation when I discuss the murderer in a later post.)

WHERE was the murder committed?


The WHERE of the murder is often closely linked to the HOW. If your victim is to die of poisoning and the poison needs to be introduced into a bitter liquid (such as coffee), then that helps narrow the field. Perhaps an intimate picnic breakfast for two in a local park is called for or (even better!) breakfast in bed.

Of course the most important thing about the crime scene is that it must create a dividing line between those who COULD have done the murder and those who could not.[1] A blizzard could have cut a group of people staying at a bed and breakfast off from the rest of the world, it could have occurred in a small English village (or, possibly, Cabot Cove Maine!), and so on.

Speaking of the crime scene, the same rules of thumb apply to this setting as to any other. Is it unique? Exaggerated? Memorable?

WHEN was the murder committed?


Generally murderers attempt to trick the detective when it comes to time of death. Corpses are frozen or draped with electric blankets, anything to mask the time of death so the murderer can set up his perfect alibi. (I'll talk about this in more detail, later, when I go over the murder method.)

HOW was the murder committed?


This should, ideally, have something to do with both the murderer and the victim. It can’t always be done, but I like it when the murder method is matched to the reason for the crime. For instance, a billionaire buys an old, family owned, winery intending to turn it into a parking lot. The day after the purchase the billionaire is found, drowned, in a vat of merlot.

From the blurb: When “a fellow passenger disappears, Myrtle realizes she must seize the helm and find the killer...before more souls are lost.”


That’s it! I’ll talk to you again on the weekend. Till then, good writing!


1. There needs to be a dividing line between those who could have done the murder and those who couldn't, but there is a subset of mysteries—a variant of a locked room mystery (e.g., Death in Paradise)—where it seems no one had the opportunity to commit the crime. Normally, means and opportunity are known and it is the motive—the psychology of the murderer—that needs to be revealed.
Karen Woodward at 9:44:00 AM
Share