How to Whip Your Prose into Shape 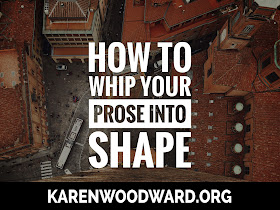 Whenever anyone writes a post about how to improve one’s prose it’s inevitable that one’s own prose comes under scrutiny! So, let me say that I’m sure you’ll be able to find many errors in my writing. Believe me, if I didn’t use the tips I’m about to give you, my writing would be much worse. In the final analysis all we can strive to do is improve. Perfection is not only unattainable, it’s not productive.

Here are my tips:

1. Hunt for and exterminate unnecessary 'this's and 'that's.


The second sentence of my first paragraph used to be:

“So, let me say that I’m sure you’ll be able to find MANY errors in my writing.”

“I’m sure you’ll be able to find MANY errors in my writing.”


The two sentences say the same thing but the second sentence says it more forcefully because it’s not as cluttered. Granted I removed more than just “that” but even just taking “that” out would have been an improvement.

Believe me, I know how tempting it is to use modifiers. My rough drafts (and even my published posts!) are riddled with them. But do try to be merciless and take out extraneous modifiers, anything not needed to express a particular thought.

Rule of thumb: If you can remove a word and the sentence expresses the same thought, then you don’t need the word.


For instance, take the sentence:

“But do try to be merciless and strike out those modifiers which a sentence doesn’t need to express a particular thought.”


This says exactly the same thing as:

“Be merciless and strike out modifiers that don't help express a particular thought.”


The latter sentence is clearer, cleaner and much easier to read.


For instance, above I wrote:

“Like any word, it has its place, there are circumstances in which it is needed.”


I ran a rough draft of this post through Pro Writing Aid and that program pointed out that “sometimes” communicates the same thing as “There are circumstances,” and does it more simply and cleanly. (Yes, I’m an affiliate for Pro Writing Aid, but only because I use and like the program.) So I could have rewritten it as:


I'm not in love with that construction, it feels stilted, but it's shorter and clearer.

“Today, I’d like to talk about what I’m going to call the ‘conflict character.’”


This sentence would be clearer as:

“Today, I’d like to talk about what I will call the ‘conflict character.’”


It’s a small change, but I like the shorter, clearer, sentence.

Pro Writing Aid helped me spot the above, but I feel it's only fair to note that sometimes the program gets it wrong. It suggested that this sentence:

“I’m going to use “antagonist” and “murderer” interchangeably except where I think it might cause confusion.”


be replaced with this sentence:

“I will use “antagonist” and “murderer” except where I think it might cause confusion.”


As you can see the latter sentence does not express the same thought as the former!

4. Compare your writing to the writing of authors you admire.


The writers whose prose I most admire are: Margaret Atwood, Neil Gaiman, Ray Bradbury and Stephen King.

Pro Writing Aid is great but, like all programs of its type, the statistics it displays are meaningless without context. So I let my favorite authors provide context!

Let me give you an example. I just ran my last post, Writing a Murder Mystery: The Conflict Character, through ProWritingAid. Then I ran a portion of Stephen King’s book, On Writing, through the program (I made sure the excerpts contained about the same number of words).


(BTW, ProWritingAid made many more than these three observations, I’m just giving you the gist of it.)

The final observation was the one that yielded paydirt. I’ve compared my work against Stephen King’s a number of times and the above pattern holds. Stephen King does not hide verbs while I salt them away like a squirrel hides nuts.

So, what is a hidden verb? A hidden verb is a verb that is turned into a noun. For instance, my article had the following hidden verbs: “a portion of,” (used twice) and “a collection of” (used twice).

Here’s one of my sentences in which I salted away a hidden verb:

“The second kind of conflict is conflict that only lasts for A PORTION OF the story.”

“The second kind of conflict only lasts for part of the story.”

How can you tell whether hidden verbs have wormed their way into your prose? I run my writing through Pro Writing Aid and it highlights these phrases! But another way of spotting them is to look for the following word endings: -mend, -tion, -sion, and -ance. Also, scrutinize words that link with words such as: “achieve, effect, give, have, make, reach, and take.”

This really only scratches the surface of ways to improve one's prose. If you'd like me to write more about this subject, let me know in the comments! :-)

This is a classic! From the blurb: “The Elements of Style ... is the best-known, most influential prescriptive treatment of English grammar and usage...” I have Elements on my writing shelf snuggled up to Stephen King’s On Writing.


That’s it! I’ll talk to you again on Wednesday. Till then, good writing!


1. I'm an affiliate for Pro Writing Aid, but only because the program has helped me become a better writer. I would not endorse a product I didn't use.
Karen Woodward at 10:11:00 PM
Share