Writing a Murder Mystery, Character Creation: The Murderer, Part One of Two 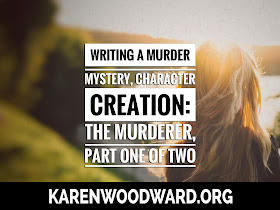 "Once I figure out whom to kill, and how, and of course why, then I start asking myself what the killer did wrong, or what he overlooked, that will lead to his undoing." —Lee Goldberg[1]

“One of the most critical skills an aspiring writer needs is the ability to build a solid villain. Even the greatest protagonist in the world cannot truly shine without an equally well-rendered opposition. The converse of that statement isn’t true, though—if your protagonist is a little shaky but your villain absolutely shines, you can still tell a very successful story.” —Jim Butcher[3]

It is difficult to overstate the importance of creating a strong antagonist, one your readers will love to hate. It is the battle between the protagonist and antagonist, their contest of wills, that generates the narrative drive that will mercilessly pull readers through the story.

How to Create an Interesting Murderer


Make the antagonist sympathetic: As strange as it may seem, we want readers to become emotionally connected to the antagonist. Readers need to be able to see themselves in the antagonist and, in so doing, understand her. (Or at least that's one way to go. Many of Agatha Christie's antagonists weren't in the least sympathetic and yet her stories are worldwide bestsellers.)

The antagonist is equal but opposite: The antagonist is often very much like the protagonist. For instance, Luke and Darth Vader were both strong in The Force and both trained as Jedi Knights. One could say they both wanted what was best but they had very different ideas about what that was.

One crucial difference: There is one crucial difference between the protagonist and antagonist. The protagonist will hold a value that the antagonist doesn’t. So, for instance, the protagonist generally does something unselfish, sometimes it doesn’t even make much rational sense. In Raiders of the Lost Ark, Dr. Belloq was Indiana Jones’ nemesis. They were both archaeologists, they were both passionate about finding and bringing back the Ark and they both liked Marion Ravenwood. The big difference? People were more important to Indiana than relics.

5 Questions to Ask about the Murderer:


1. Who does the murderer need to kill?


I’ve found that, usually, the first victim is the person the murderer needed to kill. But there are notable exceptions. Agatha Christie often broke with convention and used her readers' expectations against them (for example, Three Act Tragedy, The A.B.C. Murders).

2. What is the murder method?


Is the murder method, the means of death, an arcane poison? Or perhaps it's a normal poison but there is a problem figuring out how, or when, it was administered? Get creative! If at all possible make the murder method unique and extreme—which is to say, memorable. Read books, watch TV. Write down the many and various ways characters are dispatched. Mix and match. Use what you find to generate your own ideas.

3. Why does the killer need to kill? What is her motivation?


P.D. James once wrote that "All motives can be explained under the letter L: lust, lucre, loathing and love.”[2]

Lucre. Greed. The murderer wants to experience the lifestyles of the rich and famous and is willing to do anything to make that happen.

Loathing. Hatred. The desire to settle a grudge. A perceived offence. The desire to do unspeakable things to the drunk driver who mowed down your wife and children. His lawyer got him off on a technicality, so now you're taking matters into your own hands.

Love: Someone stole the heart of the person you've loved since fifth grade and then threw her away like garbage. As a result she committed suicide. Now you're out for revenge.

4. What does the murderer stand to lose, what are the stakes?


The murderer wants to prevent the detective from identifying her. If she fails in this then she will either be killed or spend the rest of her life in prison. In addition, she'll likely lose all her friends and possibly her family as well.

Of course often the stakes are more specific, more personal. It could be that the murderer is trying to save something he loves, a winery, a restaurant, or a relationship. For him, the worst thing in the world would be to lose that, but if he is revealed as the murderer the thing he loves most in the world will be ripped from him.

5. What did the killer do wrong? What did she overlook?


It seems axiomatic—at least in fiction—that every killer, no matter how intelligent or how well planned the crime, will make at least one mistake. With Agatha Christie, often the killer's mistake was trying to be clever, trying to pull the wool over the detective's eyes. But her detective turned this into a trap. For example, Poirot assumed the guise of the silly foreigner and so invited the proper English people of his day to underestimate him. His quirks, his foreignness, was his armor, his disguise.

What the killer did wrong, what she overlooked, has to be something the detective could discover, as well as something that plays to her strength. There are countless examples of this, but what comes to mind is the episode of Sherlock entitled The Great Game.

Sherlock Holmes is wonderful at noticing minutiae and bringing together diverse threads, strands of information and, from them, creating a synthesis that yields the answer (usually the 'ah-ha' clue triggers this epiphany). The graphical way the show's writers/producers/director have used to illustrate the information Sherlock notices (words suspended in air) works brilliantly and adds another dimension to the storytelling.

My point is that by working backward, looking at the killer, figuring out the motive and the murder method, and then asking where she slipped up is much easier than doing things the other way around.

The Goal: To Surprise the Reader


Never lose sight of the goal: to surprise the reader. I like it when I figure out the identity of the murderer a few paragraphs before the detective unmasks her. That way I feel clever because I've guessed right but I’m not bored.

Even more important, though, than surprising the reader is playing fair. Or, more precisely, it is important that the reader believes you’ve played fair and haven’t unfairly misled them. The reader must feel that everything hangs together and makes perfect sense.

This is one of my favorites: Murdoch Mysteries, Season 10.

From the blurb: "At the dawn of the 20th century, Detective William Murdoch (Yannick Bisson) solves Toronto's trickiest cases with scientific insight and ingenuity in the tenth season of the award-winning mystery series."


Next post in this two part series: Writing a Murder Mystery: 7 More Characteristics That Make a Murderer Interesting. Part Two of Two.


1. How to Write a Murder Mystery, by Lee Goldberg.