The Structure of Change 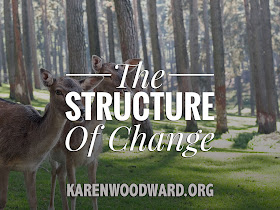 The Hero’s Journey and Change


Ages ago Chuck Wendig wrote an article about story structure [1], focusing on the Monomyth. It’s one of my favorite articles on the subject. I bring it up here because of one of the many compelling points he made: each story has its own unique structure.[2]

I agree! 'Breaking' your story and seeing how it compares to a universal structure such as the monomyth can be a terrific way to help writers check whether their plot has gaps, to see if their main characters could be more fully fleshed out, and so on. But it is vitally important to take any talk of universal structure as a guide, a suggestion, and NOT as rules carved into stone.

No one writes a story because they want to manifest a universal structure, the point is for each story to incorporate a CHANGE on a fundamental level. Keep in mind that the idea of a universal structure for a story is an abstraction. It’s like saying the average resident of New York owns 1.2 dogs. The statement is meaningful but we’ll never see 1.2 dogs peeing on a fire hydrant!


I’ve found it’s often best to save thinking about story structure for the editing process. I need to first let my creative self have it’s way with the story (which, for me, means writing a Zero Draft) and then, when I sit down to transform my Zero Draft into a First Draft, I break the story and to where the plot holes are, where it’s misshapen, and so on.

I find that puzzling out a particular story’s structure is an invaluable editing tool. (Shawn Coyne talks about this in his wonderful book, The Story Grid: What Good Editors Know.)

What do I think about when I’m actually writing a Zero Draft? I think about change. That’s what I try to keep in the front of my mind and (hopefully!) by so doing, incorporate change into the story on a fundamental level.

To sum up. In my view it is important to understand the Monomyth. Not because you’re going to incorporate all—each and every one—of its twists and turns, but because you will, inevitably, incorporate some.

Zero Draft: The Structure of Change


So what does this look like? What is the structure of change?

In any case, from my recent perusal of scripts, especially TV scripts, most particularly screenplays from Supernatural, here is the story progression that occurs:


In the beginning of the story the characters are introduced. The audience sees their pain points, their desires, their flaws, their strengths, and so on. But how does this happen? In TV often the first glimpse we get of the characters is in the teaser.

In the case of Supernatural, a monster attacks someone; sometimes this person is killed, sometimes they are just taken. There is usually darkness, fear and a lot of blood. The Teaser often sets the concrete goal: hunt and kill the monster that did this.


The protagonist has a problem, a thorn in the flesh, something that runs deep, something that can’t be shrugged off. Perhaps she feels responsible for the death of a loved one, perhaps she feels wronged—betrayed—by a loved one and those ill feelings are festering. Often a deep dark secret is involved with the protagonist’s problem, a secret she actively protects for whatever reason. Perhaps the secret is of something embarrassing, perhaps the secret is simply something she wants for her own. Letting go of the secret, opening up about it, is often necessary for true healing.


We’ve seen, above, that the protagonist has a problem. Because of this problem he wants something. Granted, this want can be somewhat nebulous (e.g., to be loved, to get justice for the death of a loved one, and so on). This want becomes the theme of the story. For example, in the first episode of Supernatural after the pilot (Wendigo), Sam feels guilt over his girlfriend’s death. In a dream, he visits his girlfriend’s grave and says, “I should have protected you, I should have told you the truth.” He deals with his guilt by throwing himself into his search for her killer. In the process Sam becomes uncharacteristically angry when Dean wants to help folks along the way.

In “Wendigo” the theme was explicitly stated when Dean asks Sam: What are we supposed to do? What does Dad want us to do? The answer: hunt monsters.

In “Skin,” Sam wants to keep in touch with his friends from Stanford but Dean tells Sam that’s just not possible in their line of work; his friends wouldn’t be able to understand what they do or why they do it.

In each of these episodes (Wendigo and Skin), Sam’s desire (and, perhaps, Dean’s reaction to it) sets the theme. Although, again, not every story needs an explicit theme (for example, the episode “Hook Man” isn’t as strongly themed as some of the others).

Have a specific, concrete, goal


Have what the character wants be specific. To solve a specific murder, to win first prize in the pie eating contest, to demonstrate your best friend’s innocence, and so on.

Throw obstacles, internal and external, into the protagonist’s path


An example of an external problem would be: the evil critter locked Sam and Dean in a cell. If they don’t find a way out they will die. An internal obstacle might be that, because of Sam’s guilt over his girlfriend’s death, he’s vulnerable to a certain kind of monster who is attracted to people who carry around a lot of emotional baggage.


Make it clear how your character's plan could go right as well as how it could go completely, terribly, wrong. In other words, make the stakes clear to the reader. Spell it out. Also, raise the stakes at least twice, preferably three times. And make it clear whenever the stakes are raised. Right before the climax the stakes should be the highest in the story and it should—at least for a moment—seem completely hopeless.


Often the protagonist will overcome his great flaw with the help of synthesis. By this I mean the synthesis of the theme and the B Story.

The synthesis is not something that occurs in every story; it can be tricky to pull off. Sometimes a flaw is just a flaw and the protagonist fails because of it. This failure can work well in a series where another character can save his bacon, giving the protagonist time to work out his issues. In a later story you can have the protagonist finally synthesize the moral from the B Story with the theme and emerge victorious.

If you can setup a satisfying synthesis then, in my opinion, you can construct an ending your readers will love and remember.


There needs to be an element of finality about this conflict. Perhaps the protagonist and antagonist have fought previously and both walked (or limped, as the case may be!) away, but that’s not possible this time. This time one of them is going down.


Every post I pick a book or audiobook I love and recommend it to you. This serves two purposes. I want to share what I’ve loved with you, and, if you click the link and buy anything over at Amazon within the next 24 hours, Amazon puts a few cents in my tip jar at no cost to you. So, if you click the link, thank you! If not, that’s okay too. I’m thrilled and honored you’ve visited my blog and read my post. :-)

I’ve seen the movie The Big Short (starring Christian Bale and Steve Carell) and loved it so much I wanted to read the book: The Big Short: Inside the Doomsday Machine, by Michael Lewis. I have it and it has been on my To Read list for ages. Perhaps that will be one of my New Year's resolutions: read The Big Short! Have you read it? If so, what did you think? Was it as good as the movie? Better?


1. NSFW --> 25 Things You Should Know About Story Structure, by Chuck Wendig.

2. Another wonderful point Chuck Wendig made was that structure should adapt to the story, not the other way around. I agree! That’s something I don’t stress enough.