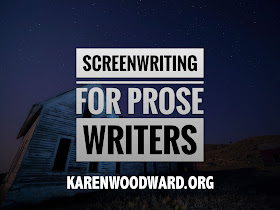 I have never written a screenplay! But I would like to. So I’ve researched the topic. Here are the highlights:


Prose writers have control over what happens to what they’ve written. An editor can make suggestions—even _strong_ suggestions—about what they’d like to see changed, but (depending on the contract you’ve sighed!) the writer usually has final say. (Although, of course, the publisher gets to decide whether they’ll publish your book!)

Screenwriters, on the other hand, have their work changed on a regular basis. Why the difference? The following is from screenwriting.info:

“... film is a highly collaborative medium and the director, cast, editor, and production crew will, based on your ‘outline,’ interpret your story their way when it is filmed. They may consult you, or they may not. Other writers may be brought in or you may be asked to re-write the entire thing. That's life, in the world of screenwriting. But because so many people are involved in the making of a film, a script must conform to standards that all involved parties understand and thus has a specific format or layout, margins, notation, and other conventions.”


So let’s take a look at screenwriting conventions:

Much of what I say below has been taken from “How to Format a Screenplay - 5 Basic Elements: FRIDAY 101” by Indy Mogul over at YouTube. In what follows I go over each of his points but, in case you’re interested, I’ve embedded his video below.

In what follows I’ll draw from the following:

This image is from a draft of the script for Raiders of the Lost Ark.[1]

Let’s step through this example.


Possible values here are exterior (EXT.) or interior (INT.) depending on whether the scene takes place inside or outside.


This names or describes the location. It can be, as here, the name of a place or it could be a description such as TEMPLE or THE SANCTUARY.


Example:
The dense, lush rain forests of the eastern slopes of the Andes, the place known as “The Eyebrow of the Jungle.” Ragged, jutting canyon walls are half-hidden by the thick mists.[1]

The ACTION is a description of what happens in a particular scene.


2.ii) Capitalization. Capitalize a character’s name the first time it comes up. Also, capitalize words you intend to call attention to. A sound for instance, or a sound effect. Something that helps set a scene.


2.iii) Leave a space. Always leave a space between the slug line and the dialogue.


3.i) Character names are always capitalized and centered.


3.ii) If the character is speaking from offscreen add (O.S.) after the name.

INDY
We don’t need them.

Dialogue goes under the name. No quotation marks.


Between the name and the dialogue. Parentheticals add detail to whatever it is the character is doing while speaking.

Today I’m going to recommend a book I’ve gotten a LOT of use from. 642 Things to Write About by San Francisco Writers' Grotto. Originally I bought it to use for writing prompts, but I ended up it for my own warm-up writing exercises! From the blurb: “This collection of 642 outrageous and witty writing prompts will get the creative juices flowing in no time. From crafting your own obituary to penning an ode to an onion, each page of this playful journal invites inspiration and provides plenty of space to write.”


That’s it! Well, almost. I’ve found a couple of sites that let folks download screenplays for free! The selection is a wee bit limited, but they have many classic screenplays (e.g., The Matrix, Raiders of the Lost Ark, etc.) and even a few that are new.

I’ll talk to you again on Wednesday. Till then, good writing!


1. From the screenplay for Raiders of the Lost Ark.
Karen Woodward at 8:41:00 PM
Share