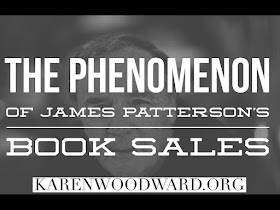 
But perhaps the thing that startled me the most was that, in 1976, while Patterson was still a copywriter, he wrote his first book: The Thomas Berryman Number. In 1977, that book went on to win the Edgar Allan Poe award for Best First Novel. To read more about James Patterson, click here.

So, let’s get down to it: James Patterson has been insanely successful writing books that sell well. In the following I want to look at what we can learn from Patterson's practice and how we can apply those insights to our own work.


I’ve begun many of Patterson’s books, but only finished one: Honeymoon. I finished that one because Patterson used it as an example to talk about his writing methods.

His writing, his style of writing just isn’t my cup of tea, but I have an enormous amount of respect for his work ethic and the success he has achieved over the course of his life.

So, how does he do it? (By the way, the quotations from James Patterson, below, are from World's Best-Selling Author James Patterson On How To Write An Unputdownable Story)

1. Be a very good storyteller.


It was Elmore Leonard who wrote, “Try to leave out the part that readers tend to skip.” Good advice.


"I used to live across the street from Alexander Haig, and if I told you a story that I went out to get the paper and Haig was laying in the driveway, and then I went on for 20 minutes describing the architecture on the street and the way the palm trees were, you'd feel like "Stop with the description—what's going on with Haig?" I tend to write stories the way you'd tell them. I think it'd be tragic if everybody wrote that way. But that's my style. I read books by a lot of great writers. I think I'm an okay writer, but a very good storyteller."


Here's what I take from this:


2. Give readers an intimate connection with your characters.


"I try to put myself in every scene that I'm writing. I try to be there. I try to put the kind of detail in stories that will make people experience what the characters are experiencing, within reason."

I wrote about the importance of making the story intimate a few days ago, only I used Stephen King's masterpiece of horror, "The Shining" as an example (see: []).

Now, of course, both men are VERY different writers. Stephen King demonstrates a level of skill with his craft few can match. But, just going from what both men have said about their work, it seems that Patterson is driven by—in this area at least—one of the same concerns as King.

And that makes sense. After all, this is a point about storytelling, not just writing.


James Patterson's books tend to have short chapters. I did some calculations and, from the four books I looked at, the average chapter length was about 640 words. That's only about three manuscript pages!


Outlining saves time. I know not everyone outlines; there are pantsers and there are plotters, and that's okay.

Patterson creates a fairly extensive outline; each chapter is summed up in about a paragraph of text. He says:

"I try to pretend that there's somebody across from me and I'm telling them a story and I don't want them to get up until I'm finished."

When I notice that two remarkably successful writers—successful in terms of books sold—do similar things even though their writing styles could not be more different, I try to incorporate those insights into my own writing practice.

That's it! I'll talk to you again on Monday. Between now and then I'll tweet a couple of writing prompts—I find them useful and thought I'd share!

Till then, good writing!