Short Stories And Their Structure 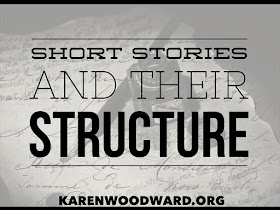 Do you ever re-read your old blog posts? That's what I've been doing (and, inexplicably, I've been doing it while re-watching Dr. Who). I just finished reading—or, rather, rereading, "Short Story Structures: Several Ways of Structuring Short Fiction." It seems like I wrote that an age ago, but it's only (only!) been four years. And, believe it or not, I remember writing that post like it was yesterday.

In the years since, I've written many short stories—though I must confess these days I write more nonfiction than fiction. Still, though, I have formed a more definite idea of what the structure of a short story is. That said, I believe these things can be idiosyncratic. The kind of short story structure that appeals to me, that fits my writing style like a glove, that feels right or comfortable, might not be the one that feels natural to you. And that's fine. That's great! Take what feels right to you, what makes sense to you, and change or ignore the rest.

So, for what it's worth, here's what I currently think of as the archetypal short story structure. (It is very close to Sarah A. Hoyt's story structure, the one she outlined in her post: The Structure of A Short Story).

1) In the first couple of lines introduce your audience to the most startling interesting/puzzling/desperate thing about your main character's immediate situation.


In a full length novel we have more time to introduce the protagonist and her situation, but when we have only 1,000 words the story structure becomes condensed and every word counts.

Let's look at a few examples of terrific openers for short stories.


"It's so dark that for a while—just how long I don't know—I think I'm still unconscious. Then, slowly, it comes to me that unconscious people don't have a sensation of movement through the dark, accompanied by a faint, rhythmic sound that can only be a squeaky wheel."


b) Ernest Hemingway, "The Short Happy Life of Francis Macomber"


"It was now lunch time and they were all sitting under the double green fly of the dining tent pretending that nothing had happened."


"The old woman was dying. There could be no doubt of it now."


"When Hal Shellburn saw it, when his son Dennis pulled it out of a mouldering Ralston-Purina carton that had been pushed far back under one attic eave, such a feeling of horror and dismay rose in him that for one moment he thought he surely must scream."


2) In the remainder of the first paragraph give your readers a good idea of your character's problem. At the same time, flesh out the setting and your protagonist's character.


If you're thinking that's a tall order, you're right. But short stories have to get moving quickly. The character's problem is the story hook. I think of this as the engine of the story, as what propels the events of the story forward.

Here's an example from Stephen King's "Autopsy Room Four" (I promise it doesn't include any grisly bits!) King writes:

And I can feel contact, from the top of my head to the balls of my heels. I can smell something that might be rubber or vinyl. This is not unconsciousness, and there is something too ... too what? Too rational about these sensations for it to be a dream.
Then what is it?
Who am I?
And what's happening to me?
The squeaky wheel quits its stupid rhythm and I stop moving. There is a crackle around me from the rubbersmelling stuff.
A voice: "Which one did they say?"
A pause.
Second voice: "Four, I think. Yeah, four."


What is the character's problem? The protagonist of our story is not dead and yet he is being wheeled into an autopsy room. We understand the protagonist's problem—he's not dead, but if something doesn't happen to prevent the autopsy he will be soon. That's a grizzly, and immediate, problem!

3) From the first paragraph up to Act Two. Develop the character's Ordinary World, specifically The Problem the protagonist is enmeshed in. (25%)


In a full length book, and in some longer short stories, the problem you develop in the first quarter of the story isn't the protagonist's main problem. The main problem, I'll call this the Story Problem, is introduced after the precursor problem is wrapped up (This wrapping up will require a few try-fail cycles).

On the other hand, in a short story of under 2,000 words or so I think it's best to give the protagonist the same goal throughout.


I know it's a movie and not a short story, and I know I should probably update my movie references, but this movie is my all-time-favorite action-adventure story. Yes, I'm talking about Indiana Jones and Raiders of the Lost Ark. That movie had terrific try-fail cycles. Indiana Jones has acquired the headpiece of the Staff of Ra, the artifact he needed to discover the exact location of the Well of Souls—and now wants to appropriate the Ark.

(For more information about try-fail cycles: Try-Fail Cycles and the Gap.)

First the antagonist René Belloq steals the Ark and seals Indy and his love interest, Marion, into the Well of Souls. Of course the Well is teeming with snakes (Indy hates snakes). Indy uses his torch to keep the snakes at bay, but the torches are burning down. Then Indiana realizes he could use one of the giant statues to knock down a wall and escape the snakes. But the next room is filled with skeletons. And so on. It's a terrific sequence!

That's the idea. Put the protagonist and those she loves in dire peril, have them grasp at straws trying to get themselves out of the fix. Your characters don't have time to think, they're reacting, going on instinct, and in that pressure cooker of adversity their character is revealed.

5) The middle of the story marks a sea-change in the protagonist. She switches from passive to active, from ignorance to knowledge. (50%)


I used to characterize the middle of the story primarily as the place where a showdown occurs between the antagonist and protagonist. And this often does happen.

But over the years I've come to view the midpoint as the place where the hero's view of the world—both the Special World of the adventure and the Ordinary World—changes. This change is permanent. There's no going back. The information, the knowledge, she acquires at the midpoint indelibly marks her. As a result it changes the story. It twists the plot.

Also, often this change takes place as a result of confronting the antagonist, the Big Bad, of the story. The antagonist gloats, boasts, to the protagonist. He lets her know just how impossible reaching her goal is. Perhaps he laughs at her, letting her know he thinks her attempts to effect change are pathetic.

The protagonist now understands that, despite all her planning, she can't achieve her goal, at least not the way she was approaching things. What she thought she knew about the world, about her opponent, was deeply flawed.

The situation looks impossible. Still, though, the hero gets away with her life, so that's something. (Although sometimes one of her allies, possibly her helper or her mentor gives up their life for her escape.)


Having regained her will to fight, the hero forms a cunning plan. Of course, as we will see, this plan goes disastrously wrong! But she will adapt with the help of her allies.


As I've said, everyone has their own way of thinking of these things, but to my mind the middle of the third act—here I'm thinking in terms of four acts—contains three events, each of them a major setback to the hero's plans, and each one more devastating than the last. The final setback is known as the Dark Night of the Soul and it completely scuttles the hero's plan.

This is the lowest part of the story. It seems impossible the hero could win. In terms of stakes, we knew all along what would happen if the hero failed, but now we discover that things are so much worse than we'd previously thought. Not only is the hero beaten, they are (apparently) obliterated.

Note: If you're writing a short story of less than 2000 words you might want to collapse these three events into one.

The Dark Night of the Soul generally comes before the hero's 'ah-ha' moment. There's something she realizes and this allows her to change her perspective. Her worldview shifts. She sees a possibility, a way out. It's a slim chance, but at this point in the story she has given up everything. The worst has happened, or at least been set in motion. She has one—exceedingly improbable—chance to save things.

And, of course, it's up to you, the writer, to determine whether she does in fact pull it off.

Then the the protagonist draws on the lessons she has leant in the Special World, on her new skills. This gives her a fighting chance. But, as I said, it's your story. Does she win? Does she beat the antagonist and achieve the Story Goal? Or does she fall victim? Perhaps, in the end, she chooses to sacrifice herself for what she sees as a greater good.

The thing to keep in mind is that the climax, although it is a confrontation between protagonist and antagonist, is all about their opposing goals. The question is: will the protagonist achieve her goal?

The antagonist generally wants the same thing as the protagonist, but the two work at cross purposes. For example, both Indiana Jones and Dr. René Belloq wanted the ark but they wanted to do vastly different things with it. Indiana Jones wanted to take it back to the States and put it in a museum where scholars could study it while Belloq wanted to give the ark to Hitler in exchange for wealth and power.


One doesn't have to spend a lot of time on this part, but I think it's important to show the aftereffects of the protagonist's confrontation with the antagonist. Show the hero back in the Ordinary World (if she survives the climax). How has her life and the lives of her allies, the lives of those in her tribe, changed because of her journey, her struggle?

A Story Structure In Three Acts
How To Write A Horror Story
Scenes, Sequels, Sequences and Acts
Karen Woodward at 2:22:00 PM
Share