Review: Girl on the Train, by Paula Hawkins 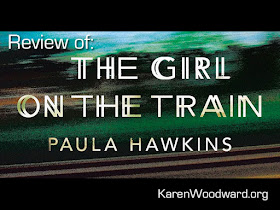 I began reading The Girl on the Train, by Paula Hawkins in part because it was compared favorably to Gillian Flynn's spellbinding novel, Gone Girl, and partly because many of the reviews I read described the story as Hitchcockian. When I was a kid I loved watching Alfred Hitchcock's movies with my dad. He loved those movies like some love fine wine. My affection for Hitchcock's movies soon mirrored his own, so I was looking forward to reading this book.

And I was not disappointed!

By now I'm sure you're familiar with the plot. The protagonist, Rachel Watson, has been fired from her job for alienating a client because she was drunk, and yet she continues to take the train into London every workday, often taking advantage of the journey to drink herself into oblivion.

On her way to and from London the train passes the house where Rachel used to live with her ex-husband, Tom. Tom has married Anna, the woman for whom he left Rachel, and they have a child.

To distract herself from the painful reality of her life, Rachel fantasizes about another couple who live just down the street from Tom and Anna. In her imagination they are a lovely couple, upstanding citizens and very much in love. Their lives are perfect, they are perfect. This is the life she wanted, the life (or something like it) she believes she once had with her ex-husband Tom.

Of course the rest of the book systematically, relentlessly, painfully, dismantles her fantasy and forces Rachel to let go of her illusions and face the reality of her life with Tom. Somewhere along Rachel's path of self-revelation a killer is exposed in a rather delicious twist (I won't spoil it!).

My thoughts on Girl on the Train:


Rachel is about as likable as she is reliable, which is to say not much. She has her share of glaring faults—as do we all—but her life is melting down around her and, in her own confused and confusing way, she tries to grope her way through.

Strangely, I ended up relating to Rachel in part because of her unreliability as a narrator. What I found appealing was the way Paula Hawkins deftly prises apart two reasons for Rachel's unreliability. Often Rachel is unreliable because she tries to live in a fantasy but she is also occasionally unreliable because she honestly believes—and has more-or-less good reason to believe—something that is not true.

Part of the task Hawkins sets the reader is teasing those threads apart.

All in all, a wonderful—and wonderfully addictive—read.

I'm giving Girl on the Train 4.5 stars out of 5 because some (many?) of Rachel's actions appear bizarre or unmotivated. Sure one can say, Well, she's melting down, she wasn't in her right mind, but that's the thing. In real life that sort of reason might work, but this is a story. It is (in my humble opinion) supposed to make sense.

But, still, this was a wonderful book and a mesmerizing read. Highly recommended.

That's it for today! I'm trying out a new blogging schedule where I post something Monday, Wednesday and Friday. (Do you prefer only two posts a week? Three? Four? Five? Six? Seven? More? Please let me know!) So, I'll talk to you again on Friday. Till then, good writing!

How To Write A Murderously Good Mystery
Three Ways To Create Suspense
Generating Suspense Through Conflict
Karen Woodward at 5:00:00 AM
Share