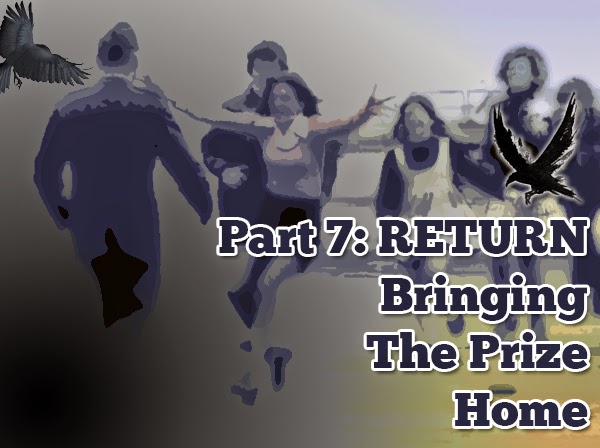 To review: Our protagonist (YOU) had a NEED that drove (GO) her into the Special World of the Adventure. While adapting to the strangeness of the Special World she SEARCHed for what would fill her need. When she found it (FIND), she TOOK it and RETURNED to the Ordinary World where she can now, transformed as she is, CHANGE the world.

Today we will be looking at the protagonist’s journey, or flight, from the Special World of the Adventure back into the Ordinary World.

The Flight From The Special World

“For some characters, this [the journey back] is as easy as hugging the scarecrow goodbye and waking up. For others, this is where the extraction team finally shows up and pulls them out—what Campbell calls "Rescue from Without." In an anecdote about having to change a flat tire in the rain, this could be the character getting back into his car.

“For others, not so easy, which is why Campbell also talks about ‘The Magic Flight.’”

It doesn’t have to take up a lot of space on the page, it doesn’t have to be death-defying (though it could be!), but at some point around 75% of the way through a story the protagonist begins her return to the community, the world, they left behind in Part 3.

But, as we’ve seen before, nothing comes without a price. The protagonist had to give up something, strip herself of the inessentials, before the meeting with the goddess in Part 5. Further, the knowledge acquired in Part 5 necessitated, in Part 6, that the last of the scales fall from the protagonist’s eyes and she endure the pain and ecstasy of seeing the story world for what it was. Or, to change metaphors, it necessitated reading within the world the deep truth of the story. But this was the last straw, the last little bit of pain/change needed to complete the protagonist’s transformation.

It comes, then, as no surprise that the protagonist’s exit from the Special World likely won’t be easy. Dan Harmon writes:

“The denizens of the deep can't have people sauntering out of the basement any more than the people upstairs wanted you going down there in the first place. The natives of the conscious and unconscious worlds justify their actions however they want, but in the grand scheme, their goal is to keep the two worlds separate, which includes keeping people from seeing one and living to tell about it.” (Story Structure 104)

As such, this part of a story is generally active. By this time many protagonists have become comfortable in the Special World so it will take an active push from something in the underworld to get the protagonist to leave. Christopher Vogler writes:

“This is a time when the story’s energy, which my have ebbed a little in the quiet moments of Seizing the Sword [TAKE], is now revved up again. If we look at the Hero’s Journey as a circle with the beginning at the top, we are still down in the basement and it will take some push to get us back up into the light.” (The Writer’s Journey)

For example, Dan Harmon writes that ...

“This is a great place for a car chase. Or, in a love story, having realized what's important, the hero bursts out of his apartment onto the sidewalk. His lover's airplane leaves for Antartica in TEN MINUTES! John McClane, who at step (1) was afraid of flying, now wraps a fire hose around his waist and leaps off an exploding building, then shoots a giant window so he can kick through it with his bloody feet.”

One of the things I like most about Dan Harmon’s treatment of story structure are the all too infrequent asides he makes about mirroring, about the way one part of the story mirrors or builds upon another.

In Part 1 storytellers introduce something the protagonist is frightened of, something that is a definite weakness. For instance, in Edge of Tomorrow (spoiler alert) the protagonist, Cage, is a coward. He would do anything, absolutely anything, rather than fight. So, of course, he spends the entire movie fighting! Around the midpoint he becomes a seasoned fighter. But he has a special gift, a special ability, that gives him an edge. Acquiring that special ability marks his entry into the Special World of the Adventure and losing it marks his exit.

Not every protagonist has as clear cut a flaw as Cage, a flaw that drives forward the action of the story. Indiana Jones, for instance, has flaws aplenty but they don’t drive the story forward, at least, not in the same fashion. Of course, as Dan Harmon mentions, it doesn’t have to be quite that clear cut. In Die Hard we learn early on that John MacClane is afraid of flying and then, in the RETURN portion of the movie, he overcomes that fear—or at least learns to master it—with dramatic effect.

That’s it! That’s it for today and it’s almost it for the series. Next time I’ll discuss the last step in the protagonist’s heroic transformation. Tell then, good reading and writing.
Karen Woodward at 11:22:00 AM
Share