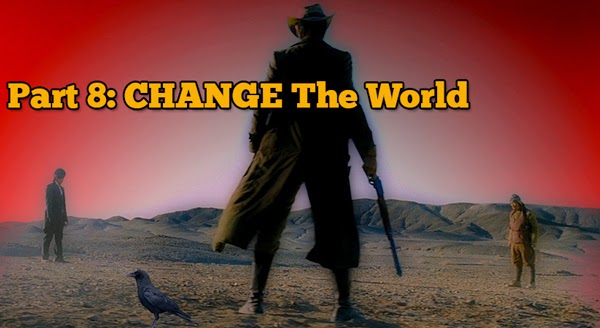 This is the last post in my Dan Harmon series. To read the series from the beginning head on over to the first post: Dan Harmon on Story Structure. I’ve placed an index at the bottom of the page.

Onward! Our protagonist is almost the master of two worlds. They have conquered the Special World of the Adventure and now they must complete the circle and bring that knowledge, that expertise (the prize) back to their community in the Ordinary World.

Part 8 - Master of Both Worlds

Dan Harmon writes: “the protagonist, on whatever scale, is now a world-altering ninja. They have been to the strange place, they have adapted to it, they have discovered true power and now they are back where they started, forever changed and forever capable of creating change. In a love story, they are able to love. In a Kung Fu story, they're able to Kung all of the Fu. In a slasher film, they can now slash the slasher.” (Story Structure 104: The Juicy Details)

This is what the story has been building up to, the confrontation, the showdown, between the protagonist and antagonist. What occurs here will determine whether the protagonist achieves his goal or fails miserably. Dan Harmon writes:

“In an action film, you're guaranteed a showdown here. In a courtroom drama, here comes the disruptive, sky-punching cross examination that leaves the murderer in a tearful confession.”

Christopher Vogler echoes this when he writes that, “the showdown is a distinct dramatic form with its own rules and conventions. (The Writer’s Journey)” Vogler goes on to enumerate some of these for a Western, but more general guidelines are given by Jim Butcher in his excellent article, Climaxes.

When I sketched the outline for this post I didn’t intend to talk about Jim Butcher’s take on the structure of story climaxes—I was just going to include a link to his article—but it’s too good NOT to discuss.

JB writes that the climax has much the same structure as a sequel: Isolation, Confrontation, Dark Moment, Choice, Dramatic Reversal and, of course, Resolution. The climax begins just as the Great Swampy Middle Ends. I’m not going to explain these terms, if they aren’t familiar, head on over to Jim Butcher’s Livejournal account. I’ve gone into this in great and gory detail here: Jim Butcher On How To Write A Suspenseful Story Climax.

Mirroring can also be done with the use of sayings, some sort of tag line—or even a repeated behavior. Whatever is used, a familiar location or a character tag, now’s the time to put a twist on it. Now it has come to mean something else, something more.

“The most popular story design seems to be the circular or closed form, in which the narrative returns to its starting point. In this structure you might bring the hero literally full circle back to the location or world where she started. Perhaps the Return is circular in a visual or metaphoric way, with a replay of an initial image, or the repetition of a line of dialogue or situation from Act One. This is one way of tying up loose ends and making a story feel complete. The image or phrases may have acquired a new meaning now that the hero has completed the journey. The original statement of the theme may be re-evaluated at the Return. Many musical compositions return to an initial theme to rephrase it at the ending.” (The Writer’s Journey)

As Dan Harmon points out, “John McClane, who at step (1) was afraid of flying, now [in Part 7] wraps a fire hose around his waist and leaps off an exploding building, then shoots a giant window so he can kick through it with his bloody feet. / Strangely enough, he will soon [Part 8] find himself back in the same room where the Christmas party was being held.”

And so we’re brought full circle.

Have you noticed that, often, the protagonist will receive something in Part 4—this could be an actual physical object or even just a realization, perhaps a profound one, about life and their place in it—and it is this very thing which will enable the protagonist to succeed in the final confrontation? Dan Harmon writes:

“One really neat trick is to remind the audience that the reason the protagonist is capable of such behavior is because of what happened down below. When in doubt, look at the opposite side of the circle. Surprise, surprise, the opposite of (8) is (4), the road of trials, where the hero was getting his shit together. Remember that zippo the bum gave him? It blocked the bullet! It's hack, but it's hack because it's worked a thousand times. Grab it, deconstruct it, create your own version. You didn't seem to have a problem with that formula when the stuttering guy (4) recited a perfect monologue (8) in Shakespeare in Love. It's all the same. [...] Why is this not Deus Ex Machina? Because we earned it (4)” (Story Structure 104)

And that’s it! I’ll close by mirroring something I said at the beginning of this series. If your story works, leave it alone! But if you feel there’s something the matter with it but you can’t figure out what, then it might be an idea to examine your story in the context of the hero’s journey. Bottom line: The hero’s journey is a tool. You can use it or not, but it’s a good thing to have in your toolbox. Just in case.


Talk to you again next week, good writing!
Karen Woodward at 9:41:00 AM
Share