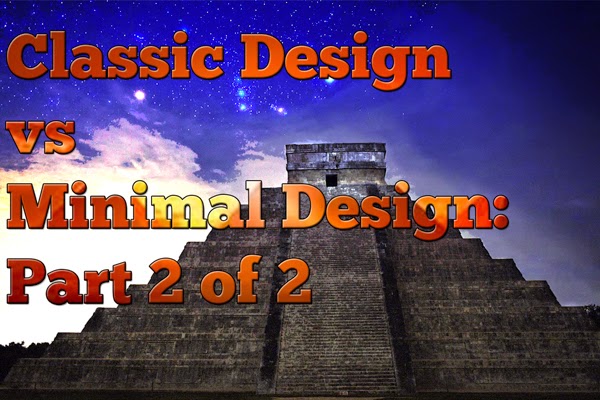 This article continues yesterday’s post on Deborah Chester’s notions of classic design. All quotations, below, are from her article Fighting for Story.

Have A Proper Protagonist

Protagonists should be heroic, strong and admirable. They should be depicted in such a way that readers will like them. Further ...

Chester writes that the protagonist should initiate confrontations “in order to accomplish a specific objective.” Further, each confrontation should cause a chain reaction. It should set other events in motion, events that “lead to bigger complications for the protagonist.”

Have A Proper Villain

Deborah Chester admonishes us to make our good guys good and our bad guys bloodcurdlingly evil—or at least devious, ruthless and driven. They should be depicted in such a way that readers will not like them. She writes:

“It’s become unfashionable to label fictional characters as the good guy or the bad guy. To consider someone a villain means you must make a judgment. You must gauge this person against your standards, ethics, and principles, and find him or her lacking.”

And, when it’s put like that, I can understand the disinclination to do so. If one measures other people against one’s own code of ethics and then judges them if they don’t measure up ... well, that’s caused quite a lot of nastiness in the world.

In real life folks have a variety of tastes and predilections. In my book, that’s just fine.

But as DC mentions:

“Fiction is art, and art makes order of reality. The story protagonist must become heroic in order to prevail over an opponent who chooses expediency enough to become a villain.”

I agree. That goes to the heart of the perception of villainy, of evil: choosing what is expedient over what is right.

In the end I think it depends on the kind of villain you want to create. As Jim Butcher and Donald Maass have said, most antagonists, even villains, see themselves as the good guy. They believe themselves to be the hero of their own story.

Perhaps perspective is the key. Readers see the story world through the eyes of the viewpoint character. In a single viewpoint novel this is (naturally) going to be the protagonist. As long as the protagonist has reason to view the antagonist as someone who is more concerned with expediency than with what is right, readers are going to see the antagonist as a proper villain.

“Classic design unfolds a story in a logical, cause-and-effect chronology. It begins with the catalytic moment of change in the protagonist’s circumstances that forces him or her to take action. Thereafter, it moves in a linear direction toward the finish where the story’s climax will resolve the protagonist’s problem one way or another.”

When there are no flashbacks the order of events is crystal clear and confusion is minimized.

One viewpoint. Classically designed stories tend to have one viewpoint character rather than several. (For example, all the books in The Dresden Files.) Deborah Chester writes:

“It [webbed plotting] involves several viewpoints, which in turn requires the story to present each viewpoint as directing a subplot. Strict chronology of story events is deemed less important than a character’s feelings or perspective. Although web plotting can generate more depth of characterization, if handled poorly it can result in a split focus in the story and much difficulty in achieving effective story resolution.”

I agree. Which, of course, isn’t to say that multiple viewpoint stories aren’t engaging—just look at the popularity of George R.R. Martin’s books. But, of course, Mr. Martin is a skilled writer. What he has pulled off is epic. I don’t think it’s controversial to suggest that a single viewpoint novel is much easier to write. So, all things being equal, if you’re setting out to write your first or second book, go easy on yourself (and your beta readers!) and stick to one viewpoint character.

How To Create A Suspenseful Scene

1. Every scene should focus on a clear character goal.

2. Every scene should end in a setback for the central character.

Character Creation: Be Bold. Be Vivid.

Exaggeration is your friend. Each character should have one, or a few, qualities which define them (see: Tags & Traits: Characterization And Building Empathy). Deborah Chester advises us to “Exaggerate that quality. Own it. Flaunt it. Build it bigger.” Make your protagonist—make all your characters—vivid. She writes:

“When I read fiction, I want to follow a viewpoint character through tough problems right into the heart of conflict and see that character meet the challenge or be temporarily flattened by it.”

Mr. Monk wasn’t just quirky, he was downright strange. People are afraid of a lot of things, but he was afraid of pretty much everything. Including milk!

Harry Dresden isn’t just a wizard—which is pretty darn cool as it is—he’s the first and only wizard to announce himself as such and make himself available for hire.

One of the best ways to create suspense is to create conflict. Chester writes:

“Every scene is focused around conflict, which is created by the clash between the protagonist’s goal and the antagonist’s goal.”

“[...] scene-based conflict focuses a confrontation between protagonist and antagonist, brings an issue out into the open, pits the two characters against each other, and drives one or the other into victory or defeat.”

Beware Ending A Story On A Cliffhanger

Deborah Chester writes that the danger of ending a story on a cliffhanger “is that readers — and inexperienced writers — lose touch with how stories should be resolved, how [...] readers should be taken through a cathartic experience of anticipation, suspense, emotion, and satisfaction at the story’s conclusion.”

You might be thinking: But that’s not how it is in real life! To that DC says:

“Fiction isn’t supposed to be realistic. It’s art, and art focuses on the message its creator wants to convey. Story is contrived by writers to transport readers to a different place and time, to put them vicariously through tremendous challenges and difficulties, and to let them survive, prevail, and grow as individuals.”

As Stephen King has said, fiction is the truth inside the lie.


That’s it! Next time I’ll continue my series on Dan Harmon’s unique take on story structure. Till then, good reading and writing.
Karen Woodward at 9:53:00 AM
Share