Part 6: TAKE - Take The Prize And Pay The Price 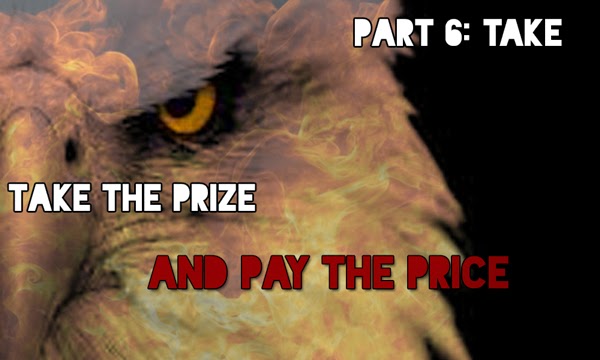 This article continues my series on Dan Harmon’s story model. Here’s a link to the first article: Dan Harmon On Story Structure.

Part 6 is about consequences. The protagonist has just passed the midpoint of our tale, she has sloughed off most of whatever was holding her back and met with the Goddess. Now she must return to the Ordinary World.

But a price must be paid for this understanding. After all, the protagonist has taken something. She has found her own personal pearl of great price. A sacrifice is required.

I want to concentrate on two things in what follows. First, the second Call to Adventure and, second, the price the protagonist must pay.

The Second Call To Adventure

No, there isn’t really a second Call to Adventure. This is more like an echo of the first Call. Referencing the movie “Real Genius” Dan Harmon writes:

“In Real Genius (I'm really drawing on the classics, now), the dorky kid (1) is recruited for a special college program that's working on a powerful laser (2). He becomes the roommate of a wayward genius whose major is how-to-parrrrrtay (3). Party man teaches Dork how to relax while Dork teaches party man how to focus (4) and as a result, they are able to perfect their laser (5) and get their prestigious accolades. But now a second, more honest call to adventure from an uber-nerd who lives in the steam tunnels: What is that laser for? Why did they have to build it to certain specifications? What did that creepy, popcorn-hating professor have in mind? Sure, they could stay here in this pizza parlor, nursing at the tit of their own prosperity. But then again, they didn't get this far by being irresponsible. It's time to start heading back up to the real world and making things right, Genius style.” (Story Structure 104: The Juicy Details)

At the midpoint (or shortly afterward) the hero discovers either that there was a dimension, an aspect, of the first Call to Adventure that she didn’t fully appreciate or she figures out she’s been snookered. Often this shift in perception is brought about by her deeper understanding of the Special World of the Adventure, an understanding given to her by the Goddess (“the Goddess” being shorthand for whatever it was that evoked this epiphany).

“Having made his peace (5) regarding his marriage, John McClane now wonders why Hans Gruber, head terrorist, was so desperate for those detonators. He goes back to the roof and discovers that the entire upper portion of the skyscraper is wired to blow. With this realization comes the consequence (6): The giant blonde terrorist - the ED-209 to McClaine's Robocop- descends on him and the two will now battle to the death.” (Story Structure 104)

So the order is:

(Part 5) Midpoint (Meeting with the Goddess)

(Part 6) The protagonist making the discovery that there’s something wrong, or missing, from his view of the world/reality.

If the story isn’t a tragedy, then there’s often what I’ll call a saving grace. Something happens, the protagonist figures something out, just in time to avert complete disaster.

In Edge of Tomorrow (spoiler alert), Cage discovers that there’s something wrong with reality as he understood it: the Omega can feed him false visions. As a result, rather than battling with the Omega, he walks into an ambush. The saving grace is that he realizes what the mimics are after in time to avert total disaster.

In Die Hard, John McClane discovers that the kidnappers aren’t kidnappers or terrorists, they’re thieves. The saving grace: McClane realizes the significance of the detonators in time to thwart their plans.

The Pearl and the Price

There are repercussions to meeting with the Goddess and in Part 6 the protagonist must pay up.

I’ve said, above, that in Part 6 the protagonist has the realization there’s something wrong, or missing, from her view of the world and therefore from her plans. Something fundamental was missing from her understanding of the mess she’s in and, as a result of her meeting with the Goddess, now she knows what it is.

This realization is both a boon and a bane. Without realizing the true depths of the problem one has, one can’t hope to solve it, but ... well, when one sees the true extent of the hole one is in that’s painful. Inevitable but painful.

In any case, there is always a price to be paid for this increased understanding of the true nature of one’s (story) reality. In Cage’s case as soon as he realized the Omega wasn’t where he ‘knew’ she would be, he realized the visions had to have been false. He’d been led into a trap. The price: He had one plan and that had gone to hell. He was back at square one. The pearl: He finally knew what he was up against.

All Hope Is Lost: The First Beat

As we’ve seen, in Part 6 the protagonist reaps the consequences of the understanding he gained in Part 5. This leads to the protagonist paying a great price which is manifested as her suffering a fundamental setback.

In my opinion, this setback is often the first try-fail in the final All Hope Is Lost try-fail cycle. Dan Harmon doesn’t put it quite this way, though he does write that ...

“[...] in a good action movie, this is where our guy simply gets his ass kicked. Robocop, armed with Clarence Boddiker's confession (5), marches into the office of Dick Jones, CEO of the company that built him. He tries to arrest the man that owns him, only to discover that he can't. It's against his programming. Loveable, human Alex Murphy (2) might have been able to pull this off, but bullet-proof, factory-made Robocop can't. [...] Between his purely mechanical brother, ED-209, and his purely human brothers, the misinformed police, being sicked on him, Robocop barely makes it out of the father's castle in one piece.” (Story Structure 104)

“In a love story, this is the part where they break up. Now comes the stubble and the dirty dishes and the closed shades. The deep, deep, suicidal depression. The boring relationship with the supposedly better partner. And finally, the realization that nothing was ever more important than him or her.” (Story Structure 104)

“When you realize that something is important, really important, to the point where it's more important than YOU, you gain full control over your destiny. In the first half of the circle, you were reacting to the forces of the universe, adapting, changing, seeking. Now you have BECOME the universe. You have become that which makes things happen. You have become a living God.” (Story Structure 104)

I think that process doesn’t truly come to fruition until Part 8: CHANGE and our protagonist wallops the Big Bad into the next Millennium, but here we see our protagonist begin to emerge from the ashes.

Yes, she’s going to suffer setbacks between now and the final showdown, but the process of transformation has already begun.


That’s it for today! Next time I’ll either look at Part 7: RETURN or I’ll talk about the gothic genre. Till then, good writing!
Karen Woodward at 11:20:00 AM
Share