Part 5: FIND - Meeting With The Goddess 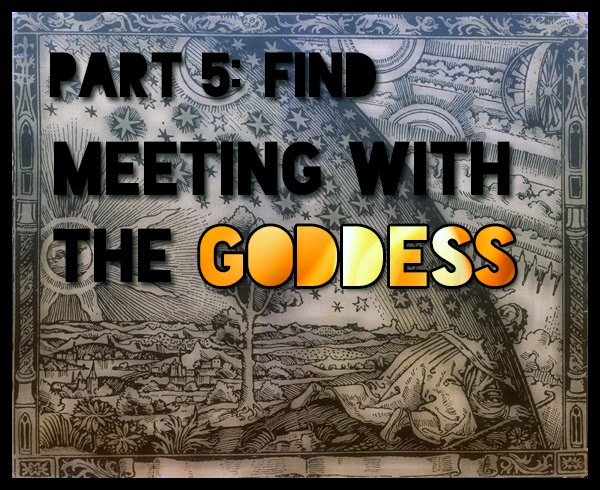 This article continues my series on Dan Harmon’s view of story structure. Here’s a link to the first article: Dan Harmon On Story Structure.

Part 5: FIND - Meeting With The Goddess

The job, the function, of the Road of Trials (Part 4) is to prepare the protagonist for his—or her—meeting with the Goddess. Though, she may not be quite what you thought you she was.

At the midpoint our hero is, metaphorically, in the depths of their psyche, in the dark, deep, depths of the unconscious so things are about to get wacky.  Harmon writes, “Anything goes down here. This is a time for major revelations, and total vulnerability. If you're writing a plot-twisty thriller, twist here and twist hard.” (Story Structure 104)

As we’ve seen, the cave of the goddess is a strange, weird place where anything can happen. At this point the character, the protagonist, is blessed (or cursed) with a major revelation, an epiphany. As a result they have a deeper understanding of life the world and everything, including what they’ve been doing wrong.

The Role of Choice

Whatever the choice is, it’s important the protagonist has time for reflection. This is a big choice and an important plot point. Even though it’s tempting to move on, give this moment the page space it deserves.

Exactly what do we mean by “The Goddess”? Dan Harmon writes:

“[...] the goddess doesn't have to be a femme fatale or an angelic damsel. In an all-male or all-female play that takes place around a poker table, the "goddess" could be a character's confession that they lost their job. The goddess can be a gesture, an idea, a gun, a diamond, a destination, or just a moment's freedom from that monster that won't stop chasing you.” (Story Structure 104)

The Role of The Goddess

Although The Goddess doesn’t mean only one thing, meeting with her (whatever form she takes in the story) is dangerous and guaranteed to transform the protagonist, changing how they think about themselves and the world around them.

Sometimes this midpoint change benefits a character and makes it easier for them to achieve their goal, sometimes it devastates them, warping them forever (e.g., The Craft).

In any case, this is a moment of inner and outer transformation, for either good or ill. Dan Harmon writes:

“In Die Hard, John McClane, having run over broken glass, is sitting in a bathroom, soaking his bloody feet in the sink. It is at this moment that he finally realizes the true extent of his love for his wife, and what he's been doing wrong in their marriage. He (1) has been too stubborn (2). He uses his walkie talkie, acquired in step (4), to give a message to his wife through his benevolent, happily married, gun-shy counterpart: ‘She's heard me say 'I love you' a thousand times...but she's never heard me say I'm sorry.’”

There’s two things here. First, the action, the pursuit (Part 4), then a pause for reflection, a pause in which the protagonist has a profound revelation, an epiphany, one that changes their understand of both themselves and the world.

At The Midpoint The Hero Switches From Passive To Active

At the Midpoint the hero switches from (mostly) passive to (mostly) active. Also, notice the mirroring going on here. Dan Harmon notes that the protagonist goes from the mama’s boy of Part 1 to a lady’s man (Part 5). He writes:

“You might have noticed that, just as (3), the crossing of the threshold, is the opposite of (7) the return, (5), the meeting with the goddess, is the opposite of (1), the protagonist's zone of comfort. Think of (1) as being the arms of mother, however dysfunctional she might be. (5) is a new form of mother, an unconscious version, and there is often a temptation to stay right here. Like at that elf guy's house in Lord of the Rings.” (Story Structure 104)

Harmon advises us to mark this transition with a definable moment. He writes:

“If this is a story of a poor little girl (1) who dreamt of being rich (2) and got adopted by a millionaire (3), having become accustomed to her new lifestyle, (4), she might now be something of a fancy pants (5). Show it with a definable moment. This might be a good point for her to drive by the orphanage in her limousine.” (Story Structure 104)

That’s it for today! Next time we’ll continue the ascent back to the Ordinary World by looking at Part 6: Taking what one has found and paying the price.
Karen Woodward at 11:56:00 AM
Share