The Second Half of Act Two: A Story Structure In Three Acts (Part 3 of 5) 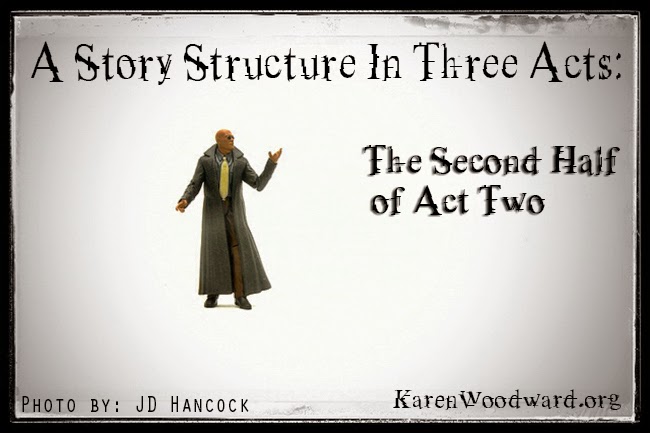 For the past two posts I’ve been stepping through what I’m calling The Three Act Structure. (Which is slightly misleading since there really is no one three act structure, but I’ve discussed that in my first two posts, so, moving on ...)

Today I’m going to talk about the second half of Act Two, including the Midpoint and Major Setback. In the next post I’ll conclude this series by discussing Act Three.

As I mentioned in the last post, the protagonist and her allies will often have to journey to the place where the protagonist will confront—or at least make some sort of contact with—the Big Bad.

Often, though, this contact isn’t of the up-close and personal variety. The protagonist can be tricked and, rather than tackling the Big Bad, is ambushed.

(Spoiler alert!) At the Midpoint, Cage in “Edge of Tomorrow” thinks he will confront the Omega, the Big Bad, but instead is ambushed by mimics (one could argue that this is actually the first setback in the sequence of setbacks that leads to the dark moment of the soul moment, but it seems more like a delayed Midpoint to me).

In “Die Hard” John McClane talks to the Big Bad (Hans Gruber) on the telephone. The contest is of wits and John McClane comes away with a better understanding of the situation.

Of course, there are lots movies that have a good old fashioned, no-holds-barred, fight between the protagonist and the Big Bad—or at least the minions of the Big Bad. Often, the spectacular and satisfying part of the midpoint comes before the confrontation with the antagonist. Generally the confrontation between the protagonist and antagonist is less than spectacular.

The Protagonist Goes From Passive To Active

For example, at the midpoint in “Edge of Tomorrow” Cage turns the corner from frightened newbie to battle-hardened warrior.

For example, in “Edge of Tomorrow” when Cage goes to confront the Omega on his own, he learns that the visions that drew him there were a trap. He and his allies are, in many ways, back at square one.

After the confrontation at the midpoint the protagonist will regroup with her allies. This could be as simple as getting back in touch through the telephone or they could physically meet to reassess the situation and decide where to go from here. If there is a celebration then it’s likely going to be the last feel good moment before the end of the book.

Use this moment to show the protagonist and the other characters reacting to what’s happening. (This is a sequel.) Highlight disagreements among the group, disagreements that could drive the adventurers apart, handicapping the hero and perhaps even leading one of her allies to betray him.

The Protagonist’s Reaction To The Revelation At The Midpoint: Bigger Stakes

Even though the protagonist has survived her confrontation at the midpoint, she has learned that her assumptions were almost completely wrong. As a result, the old stakes no longer apply. The true stakes, she now knows, are much, much, bigger.

The protagonist holds firm. There’s a chance. One slim chance. Still, the protagonist hasn’t lost hope. She believes they can do it. (The protagonist might have to be helped into this place of hope by one or more of her allies. If there is a romance, the romantic interest could play a role.)

The protagonist and her allies make a plan, they’re going to attempt to achieve the story goal, whatever the cost. Since this point in the story is called the Major Setback you can guess that things aren’t going to work out well; they’re going to fail and fail big. Further, the failure, though not a surprise in itself, should come in a way the audience won’t foresee. Though, looking back, it should make perfect sense.

Before the Major Setback there’s going to be a planning and ‘suiting up’ scene. (After all, your readers need to be clear about what the plan is and all the ways it can go wrong!)

Further, before the protagonist and her allies go into danger, before they engage with the enemy, we need to spell out the stakes. (Of course, when things go south and the stakes get cashed out, the consequences of failure are going to be worse, much worse, than we thought they would be. I’ll talk more about this in my next post.)

Once the stakes are clear and the plan has been spelled out, the protagonist and her allies—or, often, just the protagonist—travel to the place of confrontation. (BTW, the plan could be as minimal as: Let’s go in, kick ass, get what we came for and leave.) This is similar to what we did before the midpoint, only now the stakes are much bigger and the chance of success much smaller.

Exactly how the protagonist’s attempt to achieve the story goal fails is, of course, up to you. Often, the protagonist is counting on something or someone. For whatever reason—the person was captured, killed or injured, they turned traitor, or whatever—this person doesn’t come through. Whatever the critical something is, it will fail, and it will fail in a way the protagonist couldn’t have anticipated. (e.g., Cypher in “The Matrix”)

That’s it! In the next post I’ll conclude this series by looking at Act Three and discussing the All Hope Is Lost moment (or, rather, culminating series of crises that bring the protagonist to her darkest hour) as well as the most exciting scene of the story: The Climax.