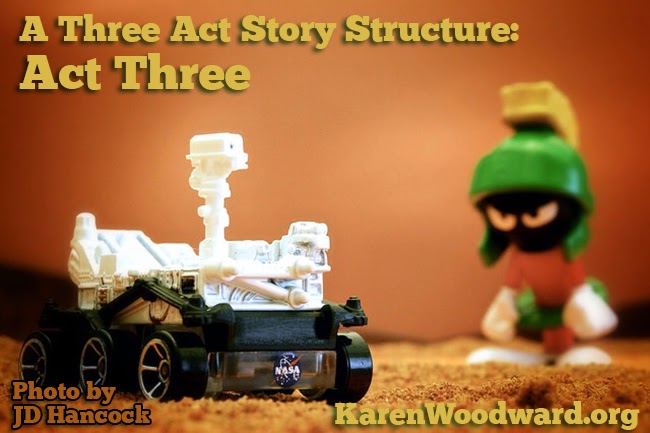 Today I continue my series on the Three Act Structure for genre stories.

In this post I’m going to examine a special kind of Try-Fail Cycle, what I call the All Hope Is Lost Try-Fail Cycle. It begins with the Major Setback, carries us into Act Three and ends with the Story Climax (or Final Conflict). I had hoped to get through the Final Conflict today, but that didn’t happen. I will do that Wednesday.

Endings are important. It’s said that the first few pages of a story sell that book while the last few pages sell the next book. I believe that.

The ending plays out in Act Three so, ideally, the third act will build the tension of the first two acts into a crescendo of suspense, rushing into The Story Climax, where the Story Question will be decided.

All Hope Is Lost: An Odd Try-Fail Cycle

What I’m calling the All Hope Is Lost Try-Fail Cycle contains three events.

Second Time. After that devastating, plot-twisting, defeat, the protagonist comes up with a new plan, but this new plan fails as well.

Third Time (All Hope Is Lost). Undeterred, the protagonist forms a new plan and, though it seems impossible it will succeed, there’s nothing else to try. The stakes, now, are the highest they have ever been and the chance of success the smallest it has ever been. At the end of this sequence the protagonist seems to fail, totally and completely.

Sometimes (for example, in “Edge of Tomorrow”), this seeming failure lasts only a few seconds and then, immediately following, we get the resolution, the conclusion, of the tale. Other times it is more drawn out. Both kinds of stories, though, usually have the same general structure:

After the devastating, plot-twisting, defeat of the Major Setback, the protagonist comes up with a new plan, but the new plan fails.

The consequences of the failure turn out to be very much worse than anyone imagined. The protagonist is unprepared for this and sometimes loses hope. Often an ally or a mentor figure will come onstage and give the protagonist a pep talk. Or perhaps the antagonist will push the protagonist past endurance and she’ll snap only to find a core of strength to her being she never suspected.

The protagonist comes up with another plan but this plan, too, fails, or appears to fail.

This final try-fail sequence ends with the All Hope Is Lost beat, also known as the Dark Night of the Soul.

As bad as things seemed at the end of the second sequence, it will turn out that what the protagonist thought was the true bottom—the worst things could possibly get—was only a way-stop on the way to complete and total ruin.

The Third Try-Fail Cycle and the Ray of Hope

The last stop of her journey from darkness to enlightenment is for the protagonist to make a radical—and much needed—change to her worldview.

This is where all the messy touchy-feely stuff, all the character building, the talk of internal goals, scars, and so on, comes into play.

Also, though I haven’t mentioned it (I’ve only been concentrating on the A-Story) this is where the B-Story pays off big-time.

The B-Story is all about—is essentially about—the protagonists inner change. There’s something she is blind to about herself (with Shrek, it was that he was lonely and needed to let people in; both literally (into his swamp) and figuratively.)

The B-Story Hooks Into The A-Story

Here, at the final All Hope Is Lost point, at the very end of this cataclysmic try-fail cycle, we need the scales to fall from the protagonist’s eyes and for her to see things in a new way.

This often leads to the protagonist discovering what I think of as the ‘good trick.’ Since she is no longer deceiving herself, she sees what was right under her nose the whole time! (Or, at least, in a bolt of inspiration thinks of the problem in a new way and devises a new plan.)

Or, perhaps, now she sees the truth about herself, and this epiphany, this revelation, heals her inner wound.

Obviously, what happens now will depend on your story. Sometimes the new plan quickly leads to the final confrontation between the protagonist and antagonist, sometimes not. If not, perhaps the group of adventurers needs to re-assemble—or at least the core group. Perhaps one or two of the protagonist’s allies go off on their own mini-quest. If so, these quests will be very short and the focus will still be on the protagonist and her final approach.

I’ll talk about the Final Conflict—the climax of the story—in the next post.

An Example of the All Hope Is Lost Try-Fail Cycles: Edge of Tomorrow

Spoilers ahead! If you haven’t yet watched “Edge of Tomorrow” I would advise you to stop reading now and watch it. It was, hands down, my favorite action flick of 2014. If you haven’t watched it and don’t plan to, here’s a summary of the movie.

Here are what I see as that story’s “All Hope Is Lost” sequences.

The Major Setback occurs when Cage goes off on his own to confront the Omega (if you haven’t seen the movie, the Omega is the Big Bad and must be killed). At least, that was Cage’s plan. The obstacle was that ... surprise! ... the Omega wasn’t there. Instead of battling the Omega, Cage was ambushed by a couple of mimics who tried their best to kill him permanently.

One of Cage’s allies tells him about a device that can be used to locate the position of the Omega. The problem is it’s in General Brigham’s office, and the general isn’t about to give it to Cage. Still, what other choice is there? Cage tries to convince the General of the truth of his story. At first it seems he has succeeded. The General gives cage the artifact, but that turns out to be a ruse and Cage and his ally must flee for their lives. While fleeing, Cage uses the device to locate the Omega.

Unfortunately, Cage is wounded and taken to a hospital where he is given a blood transfusion. As a result, he can’t reset the day anymore. That was the only edge Cage had, that was his superpower.

Cage comes up with a new plan, it’s the only option left. He convinces his squad to go with him to attack the Omega. After suffering heavy losses—his entire team has died—Cage swims toward the Omega intending to plant an explosive device on it.

Unfortunately, before he can do this, a Mimic swims up behind him and thrusts one of it’s tentacles through Cage’s chest. Cage lets go of the explosive which drifts down toward the Omega, getting caught up in the thing’s gills. Still, this means nothing. Cage has failed. He didn’t arm the explosive charge before it drifted away.

Cage has lost, finally, totally, completely. He is moments from death. The woman he loves is dead. All his allies are dead. His plans have failed. Humanity is about to be driven extinct and the Earth stripped of its resources.

This is the All Is Lost beat.

A moment before Cage dies he opens his hand revealing several trigger pins and we realize that he has armed the explosive, after all. Cage smiles in triumph and the next moment we see the Omega explode. Cage has won.

All Hope Is Lost: Summary

“Edge of Tomorrow” is just one example of how the All Hope Is Lost sequences were handled (though I think it’s an especially good example), but each story is different. For instance, there don’t always have to be three beats in this sequence. Also, the first beat doesn’t have to be the Major Setback.

There is no one way of doing this, just like there’s no one right way of telling a story. (“He slept and then she slept,” is a story, though not a riveting one.)

That’s it for today! Next time we’ll finish up this series and examine the Story Climax. Till then, happy writing, and thanks for reading.

(This blog post was first published on karenwoodward.org under the title: A Three Act Story Structure: Act Three.)