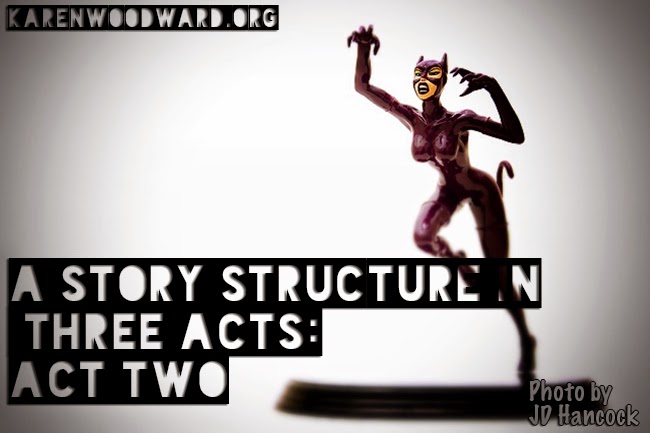 In my Last post, I examined Act One of the three act structure. Today, let’s look at Act Two. But, before we get to that, please keep in mind this is only one version. This is how I’ve come to see it. Doubtless, other people have their own way. Use whatever works for you.

I don’t think I’ve read or watched any story that incorporates each and every one of the points I’m discussing. But most genre stories have this basic skeleton:

1. Call to Adventure (~10%): the protagonist accepts the story goal.

2. First Plot Point (~25%): the protagonist is Locked Into the adventure and enters the Special World.

3. The Midpoint (~50%): Complications and Higher Stakes, confrontation with the antagonist, new information.

5. The Climax (~95%): The showdown between the protagonist and the antagonist. The Story Question is answered.

Last time, we talked about the protagonist’s Call to Adventure and her entry into the Special World. Today, I’m going to talk about the first half of Act Two.

As we saw, at the end of Act One the protagonist leaves the Ordinary World, leaves her familiar surroundings, and travels to the Special World of the adventure. We now come to Act Two and The Lock-In.

Plot Point One: The Lock-In

The idea or concept of a plot point was introduced by Syd Field in his eminently readable book, “Screenplay.” It’s the idea of a significant event, a complication, that spins the action of the story around in another direction. There are only two plot points, one at the end of Act One (The Lock-In) and another at the end of Act Two (The Major Setback).

This complication has the effect of locking the protagonist into her quest. One of my favorite examples of this occurs in the Matrix when Morpheus gives Neo a choice: take the red pill and learn the truth he has been searching for all his life, the truth about the Matrix, or take the blue pill and continue life as before. Whichever choice Neo makes, there’s no going back.

I think of the Special World of the Adventure as being radically different from the Ordinary World the protagonist has just left. Metaphorically, it’s inside out and upside down (Kansas vs the Land of Oz). In this new environment, the protagonist’s strengths are now weaknesses and what were her weaknesses turn out to be strengths. Also, since the protagonist is radically unfamiliar with the rules of the special world, she doesn’t know how to behave and often acts like a fish out of water (e.g., Luke Skywalker in the Mos Eisley Cantina).

There’s a bit of mirroring here. Many of the things we said of the Ordinary World are also true of the Special World. For instance, the protagonist will often meet new friends as well as make new enemies.

(Though I’m not going to say much about it, the B-Story often starts now and will involve these new acquaintances. To read more about the A- and B-Story’s I recommend Steven Pressfield’s article: The “A” Story and the “B” Story.)

Another similarity between the Ordinary World and the Special World is that, on entering the Special World, the protagonist will have an initial goal, one that will soon take on new dimensions.

As soon as the protagonist enters the Special World she will begin a series of Tests and Trials, mini adventures which highlight the strangeness of the Special World. Because her strengths are now weaknesses, and vice versa, she will fail quite a lot and in ways she couldn’t have foreseen.

As the protagonist goes through her Tests and Trials she’ll often receive aid and advice from her new friends and be hindered by her new enemies.

Often, at the tail end of Tests and Trials the protagonist has her first big success. For the first time she triumphs over her tormenters. There’s a brief celebration then, suddenly, the Big Bad rears his head.

Though not every story has pinch points, there are often two such points in a story. Pinch points bring the focus back onto the antagonist and his goal. We are once again reminded of the stakes and of how truly awful this could turn out for the protagonist and her allies.

The first pinch point ends the Tests and Trials as well as the Fun and Games; it reminds the hero why he is in the Special World.

The antagonist and her allies come up with a plan, a way to end the antagonist’s tyranny and achieve the story goal. Sure, the protagonist hasn’t done all that well yet in the Special World, but she has no choice but to continue, not if she wishes to achieve her goal and save both herself and those important to her.

At this point there’s often a group moment, perhaps even a romantic interlude between the protagonist and someone special. This is a time of bonding before the group makes the dangerous journey to the place of confrontation.

That’s what I’ll talk about next time! Till then, good writing and thanks for reading.

(This post was first published on karenwoodward.org as: A Story Structure In Three Acts: Act Two.)