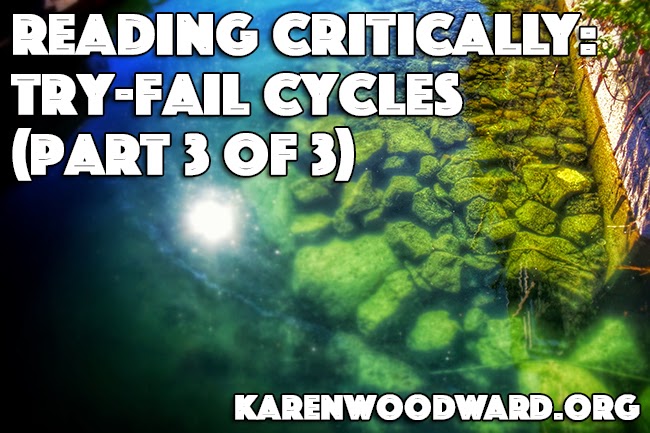 Today I’m going to finish up the critical reading portion of these posts. We’ll finish examining the anatomy of a scene by taking a look at try-fail cycles. Then we’ll look at an alternative to try-fail cycles. Finally, we’ll take the briefest of peeks at backstory and setting. And that’s it!

In my next post I’ll talk about how to write a useful critique that a writer would like to receive.

I had this part of my post written and then, yesterday, came across a talk Jim Butcher gave in 2013 for the Space City Con. (part 1 is here, part 2 is here.) JB talks for less than half an hour at the beginning of each part, the rest is Q & A. Part 1 is about scenes, part 2, sequels. It’s great stuff, I highly recommend it.

One thing JB talks about, and something you’ll come across in almost every scene—at least in genre novels—is the try-fail cycle. After all, it would be pretty boring for readers if the protagonist had a goal, there was some sort of opposition to this goal and then the protagonist either gave up or achieved the goal.

At the beginning of the cycle, the protagonist tries to surmount the obstacle. Usually, her first attempt fails, as does the second. The third will either fail completely, partially succeed or completely succeed. But, whatever the outcome, the third attempt should be different. (Heidi Tighe has written a wonderful blog post on this, so—if you’d like to read about a great example of try-fail cycles from Breaking Bad—go check out her post: Four Elements of a Try-Fail Cycle.)

But that leaves us with a question. At the very end of the scene—that very last try—should the protagonist succeed or fail? Actually, there are four possibilities to choose from:

a. Total Failure: Does the protagonist achieve their scene goal? No!

This is a great way to end a scene! In the sequel we would then cash out the stakes and show the negative consequences for both the hero and those who were important to her. Then she would have to scrape herself off the floor (perhaps with the help of friends and allies), formulate a new plan and try again.

One of the most common pieces of advice offered to writers is to throw as much trouble as possible at the protagonist—and then triple it! Why? Because the way the protagonist reacts to adversity will show us who she is. It will skin her like an onion, showing readers the layers of her personality. It will (changing metaphors) whittle her down to her essence. Want to know who a person is? What they’re really like? Look at how they preform under pressure, when everything is going wrong.

b. Total Failure with complications: Does the protagonist achieve her goal? No! AND there is a messy complication.

Everything we’ve said about (a) holds true here, but we pile even more trouble on the hero. Not only did his final attempt fail, but now it will be more difficult for him to reach his goal.

The hero achieves her scene goal. Often when this happens (unless it is the final scene in the book) it turns out that achieving the scene goal doesn’t get her closer to her story goal—although she had every reason to think it would!

For example, let’s say our protagonist found a way to overcome her allergy to the rejuvenating cream (this continues my example from last time). At the end of the scene her skin glows with youthful vitality. In the next scene, when she gets to the audition, she discovers that the modeling agency wants a more mature looking model, so her youthful glow actually works against her. Once again, the goal of her securing a modeling contract is in jeopardy AND now she has next to no time to fix matters, thus ratcheting up the tension.

d. Partial Success: Yes! The protagonist achieves her goal, BUT there is a messy complication.

The hero achieves part of her goal. She achieves something but also experiences a disaster.

This can work fine as well. After all, it makes sense that a price must be paid for success. It makes sense that one can’t get something without first giving up something. I’ve written two articles on this, if you’d like to read more about try-fail cycles:

Try-Fail Cycles And The Gap
Making A Scene: Using Conflicts And Setbacks To Create Narrative Drive

Questions to think about when reading critically:

- How does the main character of the scene attempt to surmount each obstacle put in front of her?

- Do the stakes build throughout the scene?

- Does the character’s success or failure connect up to the scene goal?

Questions to think about when writing a critique:

- I mentioned this before, but I think it bears repeating: Is there a clear resolution to the scene as a whole? At the end of the scene is it clear whether the character has attained their scene goal? (Note: Some scenes can end on a cliffhanger. This occurs when a scene ends just before we know the answer to the scene question. Of course that’s fine. Everything will be cashed out, it’s just that the cashing out will be delayed.)

- Is it clear how the scene goal connects to the story goal?

- When the character doesn’t achieve her goal, are the stakes worse than she thought? (They don’t always have to be, but the stakes should gradually increase throughout the story.)

The try-fail cycle isn’t all there is. As Orson Scott Card points out, there are other ways of progressing through a scene. (See: Uncle Orson's Writing Class: Novel Length: August 2, 2000.)

a. The Conflicting Objectives Cycle.

Conflicting objectives are “Things that are worth doing, that need doing, which sidetrack the characters and distract them from their quest.”

OSC writes: “Then there's the This Can't Happen trick (Gandalf dies?) that ‘changes everything’ and causes the group to reconfigure (again, some of them being distracted as they go off on sub-quests).”

d. The Protagonist’s Conflicting Emotions About The Quest

Even the protagonist is going to, occasionally, have his doubts. He’s going to have “conflicting feelings about having undertaken the quest in the first place, and about putting other people's lives at risk. (I'll go off by myself, says Frodo, because this way I'm only bringing destruction down on myself [Actually, this was deeply stupid, since the friends were his main hope of avoiding being killed by the ring-wraiths; but Tolkien made it all come out anyway <grin>].)”

Alternatives to try fail cycles: something to keep in mind:

OSC cautions that the thing to keep in mind, here, is that whatever you do has to advance the story (in other words, whatever you do “to make us care more or worry more about the characters”) it has to arise “out of who they are” and it must eventually transform them.

The goal in introducing backstory is to:

b. Give as little backstory as possible. That is, give only as much as will make the scene intelligible. Ruthlessly cut the excess.

- Is this true of the book/manuscript you’re reading? Are you showered with details you don’t need to know or, alternatively, do you often feel that a character’s behavior lacks motivation?

Is the setting interesting? Memorable? Is it unusual, exciting, exotic?

A Bird’s Eye View: How Do The Scenes Fit Together?

After I finish reading a story, I’ll spread my notes out on my desk (this includes my notes on each scene). Then I’ll look at how the scenes fit together.

- Do the stakes continually increase from scene to scene?

- Are the scene goals connected to the story goal? (I mentioned this earlier, but I thought I’d list it here as well since it is very important.)

That’s it for reading critically! Next time I’ll talk about how to write a critique a writer would be happy to receive.