How I Write A Critique 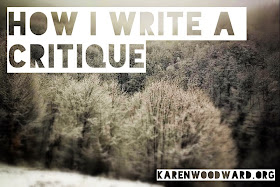 To recap: There are two parts or stages to writing a critique. The first part—what I’ve been talking about the past few posts (see here, here and here)—is all about studying it, reading it critically.

Today I’m going to concentrate on taking the information we’ve collected through a critical reading of the story and arranging it, writing it up and presenting our views, our opinions, to the writer.

After I finish taking all these notes, after I finish asking myself all these questions about the text I’m reading, I’ll end up with rather a long document. I do not pass along all this information along to the writer! For one thing, it would overwhelm them.

The Audience for a Critique

Let’s step back a moment and talk about the tone of a critique.

When writing a critique, I think it’s important to ask oneself the question: What sort of a story is this and, given this, what sort of critique would the author appreciate?

In a way, critiquing is no different than any other kind of writing, it’s just that with a critique your audience has been whittled down to one. In this sense a critique is very personal. It is like a letter, a passing of thoughts and feelings between two people.

One thing I attempt to always keep in mind is that, really, I (as the critiquer) have it easy in this exchange. I’m not exposed. It’s the writer who has, metaphorically speaking, just stripped themselves naked.

In this sort of situation the writer is often going to be sensitive—especially if they’re new or if this is your first time critiquing their work. (Often it is helpful if you can chat with the writer beforehand and find out what kind of critique they are looking for.)

One thing I want to make clear from the outset is that a critique—at least, how I use the term—is a very different creature from a review.

A review, first of all, is primarily for potential readers of the story. A critique, as I’ve said above, is only for one person: the writer of the story.

Although a review may be read by the author of the work in question, it isn’t written for the author, it is written for folks who are wondering whether they would enjoy reading the story. As such, the reviewer has a responsibility to—if I may put it like this—call it as they see it. They have zero obligation to think of the authors feelings.

In what follows I’m writing about a critique, not a review. I’m going to focus on writing a critique a writer would like to get. Such a critique, IMHO, is tactful and presents both praise and criticisms as opinions as opposed to the universal voice of truth. After all, the only way one’s observations will do the writer any good is if they are accepted, and no one is likely to accept a truth offered in an insulting manner.

The Anatomy of a Critique

Begin with a general impression.

It depends upon the depth of my critique, but I’ll usually (critically) read the story through once and then open with an overall, general, impression. If, overall, I loved the story—if I thought it was a good read—I’ll tell the writer this.

(Of course liking is not required when it comes to characters. For instance, I thought Andrew Scott’s portrayal of Moriarty on the TV series “Sherlock” was wonderful. Brilliant! But I didn’t like the character.)

For myself, when I can’t find anything laudatory about a story after a first pass, I look deeper. There’s always something, even if it is simply the writer’s enthusiasm. That said—and this has never yet happened—if I really can find nothing to put in the “I liked this!” column, I wouldn’t send the writer my critique.

The Body of a Critique

As I said, I’ll begin the critique with my general, overall, take on the story. I’ll begin by drawing attention to something I liked and then give a succinct one line summary of how I felt about the story as a whole. After that I’ll present a ...

As I read through the story I’ll comment on parts I thought were exceptionally well done or, depending on the genre, I’ll mention what a certain clue makes me think about how the story will turn out. It depends on how in-depth the critique is going to be. If a friend wants a quick evaluation and his/her manuscript is pretty clean (no awkward bits, etc.), I’ll often skip this step.

I will also flag any text that struck me as awkward. If I didn’t understand something because the sentence was mangled or because the idea the sentence expressed didn’t seem to fit with what came before, I’ll indicate this.

- that I liked,
- that seemed awkward or confusing, as well as
- places where I lost interest.

The End of A Critique

I’ll close a critique with a more general analysis of the story. I’ll mention details of scenes or characters, or perhaps of the general structure, that didn’t (or did!) work for me.

- Were there inconsistencies in characterization? Was one character’s hair red in one scene and black in another?

- Were any of the characters underdeveloped or boring?

- Were the character’s goals clear? Were the stakes clear?

And so on. (Since I’ve explored these questions in my previous posts—see the links I gave in the first paragraph of this article—I won’t repeat them here.)

I think the number one thing to keep in mind is what the writer was trying to do. Were they attempting to write a genre piece? If so, then it’s both appropriate and helpful to point out if and where the story departed from what a reader of that genre would expect.

For instance, a murder mystery that doesn’t unmask the culprit at the end would generate quite a bit of ire on the part of mystery buffs. Also, if the story deviates from something like the three act structure—and this negatively affects the story—it might be something to mention.

In this series I’ve written exclusively about genre stories. But, often, a writer just wants to write a story. They don’t have anything particular in mind and they aren’t planning on publishing anything. They wrote their tale for their own edification and no one other than their family and friends will ever see it.

In this case there are no rules. What this person has written is a work of art (which isn’t to say anything about the skill with which the story was rendered). If I were asked to critique a story like this I would talk about what thoughts and feelings the language evoked in me; I would talk about whether I found the ending satisfying, and so on.

That’s it! I hope you found something I’ve rambled on about useful. In any case, thanks for reading.

Question: How do you write a critique? Do you have a tip to pass along?

This blog post, How I Write A Critique, first appeared on KarenWoodward.org.