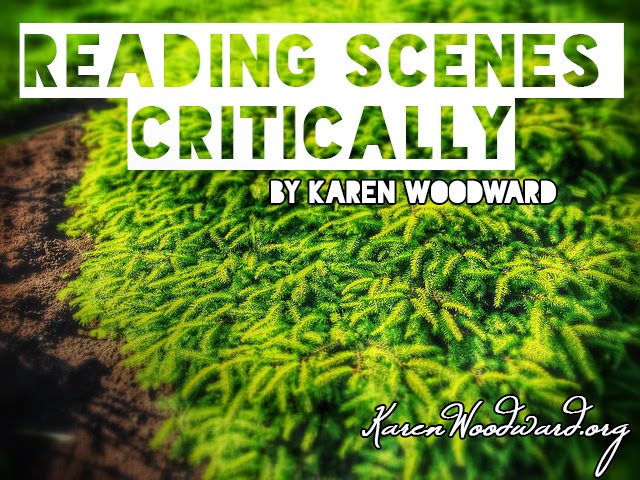 Today I continue my two part series on reading critically. I had hoped to wrap things up today, but that’s not going to happen! Last time we talked about two levels of textual analysis, macro and micro: the story and the scene. Today let’s continue discussing scenes and what to look for. Let’s dive in.

(Of course, in the beginning of the story the consequences may only affect the protagonist. After all, if everyone she ever cared about is affected right at the beginning there’s nowhere to go! The stakes should grow over the course of a story, so it’s fine to start small.)

Note regarding scenes and sequels:

In this article I’m concentrating on scenes rather than sequels but since I just discussed stakes let me make one comment. Often one uses a sequel to show the stakes being cashed out, to show how both the protagonist’s life, and possibly the lives of those he cares about, have been changed. (For more on sequels see: The Importance of Sequels and The Structure of Sequels.)

Imagine that a character, Xan, is in a rowboat fleeing from a man-eating shark. He’s rowing to the shore, really putting his back into it, sweat soaking his clothes. In this scenario the shark (and accompanying bloody loss of life) is Xan’s motivation to reach his goal, which is the shore.

- In your scene, what motivates the main character’s action?

- What is the main character’s goal? Where are they headed?

In my example, Xan was fatigued, worn out. That’s an obstacle to him reaching the shore. Or we could make the obstacle a bit more solid and have him hit a reef, one that shatters his rowboat. The possibilities are only limited by one’s imagination.

In the example, above, the antagonistic force was a shark. Why? Because it opposed Xan’s goal of reaching the shore and because their goals were mutually exclusive. Xan’s fatigue and the reef are obstacles. Even though they weren’t placed there by the shark, they aided it in foiling the protagonist’s plans.

Obstacle vs Antagonist. One might wonder what makes one thing an obstacle and another an antagonist. It’s a good question; I think it largely depends on the context. In my example, above, if there had been no shark I might have thought of the reef as an antagonistic force rather than simply an obstacle. To my mind, antagonists tend to have agency, or we tend to attribute agency to them. Obstacles tend to be physical and specific.

Let’s call this scene-specific opposition the local antagonistic force. For example, the protagonist could want to try out the latest in anti-aging creams so she can win a modeling contract (the story goal), but she can’t because she’s allergic. If she puts the cream on, her skin will become red and scaly.

In this example her allergy is the (local) antagonistic force that prevents her from achieving her goal. The Big Bad of the story, on the other hand, could be another model she’s competing with for the modeling contract, one who will do whatever it takes to succeed.

Questions To Ask When Reading A Scene Critically

Drawing upon all that we’ve said, here are a few questions to ask when reading a scene critically:

Here are a few points to consider when formulating a critique:

I’ll talk more about this when I discuss how to sift through this mass of information and use it to write a critique. But I want to stress that the questions I’ve shared, above, are only meant as an aid in reading critically.

With that out of the way, let me say that the stories I had in mind while writing these articles were genre stories. Generally speaking, readers have more expectations when it comes to genre stories than they do for literary ones (though I admit that the dividing line between genre and literature can be blurry at times).

What I’m saying is: Please do feel free to put everything I’ve written aside, read a story, and respond from your gut. Your heart. I’ve written these posts because ... well, I know that, for myself, I often would appreciate a framework.

This is especially so when I feel that there’s something wrong with the story but I just can’t put my finger on it. In those cases, sometimes it helps to do a deep reading of the material while keeping questions—questions such as the ones I’ve raised here—in mind.

That’s it for today! I had hoped to finish talking about critical reading today, but I’d like to cover try-fail cycles. Also, I want to touch on both backstory and setting. I’ll pick this up again on Wednesday.


Till then, just write!