A Three Act Story Structure: The Final Conflict (Part 5 of 5) 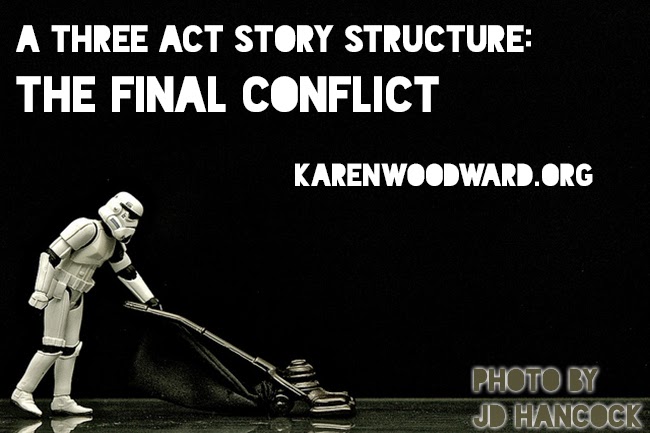 This is the final post in my series on the Three Act Structure for genre stories. Yes! (I always get a bit excited when I write the last post in a series, it’s not the same as finishing a short story, but it’s still good.) Here’s an index to the rest of the posts in this series:

In many ways the final bit of your story, the Final Conflict, is the most important part. If the ending isn’t satisfying then, chances are, your readers won’t be waiting on pins and needles for your next story.

I’ve written about story endings elsewhere (see here and here) but what I want to concentrate on today is everything that happens after the protagonist goes through the All Hope Is Lost moment and has her epiphany. (I’m not going to talk about this moment here because I covered it in my last post, see above.)

Things are now looking up. Sure, nothing has actually changed. The protagonist is still in the deep dark pit with no way out and his allies are about to be killed in the most brutal of ways, but, still, things aren’t as bleak because the hero has an idea.

Now the protagonist makes a new plan. Often she is alone at this point, her allies having been sidelined. But, even if she has allies, she often won’t reveal the specifics of her plan. (The writer  may not want her readers to be too informed at this point since not knowing exactly how the protagonist plans to pull things off can help build suspense.)

Story reasons for the protagonist keeping her plan to herself could include the following:

In any case, the protagonist advances, alone, to the place where the final conflict will take place. (Though, her being alone isn’t the crucial bit. She could have one or two allies come with her, the crucial bit is that she faces the Big Bad all by herself without any help.)

There is often a confrontation with the antagonist’s minion, a confrontation that the protagonist will win, now, without too much trouble. The minion would have beaten her before her revelation—before the epiphany she had at the end of the All Hope Is Lost moment—but now the tables are turned.

Also, this confrontation with a minion shows how far the protagonist has come. She has overcome her weaknesses, she has healed her wound, and it’s time to let the audience see this.

One way of accomplishing this is to have the protagonist wipe the floor with a bad guy that gave her a sound beating earlier in the story, around about the time she entered the Special World and was still figuring out how things worked.

Often this bad guy is the Big Bad’s second in command. He sees that the protagonist is in pretty bad shape, she’s beaten up, and he thinks she’ll be easy to obliterate. What ensues now is what I think of as fun, satisfying, violence, the sort of thing you see in the trailer to a James Bond flick. She will win the fight with the minion fairly easily (though the protagonist may fake an injury to build a moment or two of tension) and he’ll die with an incredulous expression on his face.

After this fight things get serious. Often, one way the protagonist can win is by sacrificing her life. This would be noble and a perfectly good ending, but we want her to live, so there’s suspense, tension.

Riding high from trouncing the minion the protagonist often walks into a trap. Or she is ambushed. Perhaps our protagonist has gotten a little cocky, perhaps a vestige of her former, scarred, self rears its head. Whatever the case, the protagonist gets into trouble.

This could happen right as the protagonist goes to engage the antagonist, or it could happen after the fight is well on its way and the antagonist is starting to realize he may not win the fight (or confrontation). Whatever the case, there’s a moment when it looks as though we were wrong—really really wrong—about the protagonist now being as good as it gets. She’s in trouble again and this could be the end of her and her quest.

But it’s not. She faked the injury to get an advantage.

It sometimes happens here that the antagonist ups the stakes one last time by daring to do what no one else would. Perhaps he alters himself in such a way that he is now the walking dead but he’s going to be godly for the next ten minutes, which is more than enough time to destroy the protagonist. This pushes the protagonist to excel in a way we’re truly not sure she’s capable of and, once again, the audience is (hopefully!) on the edge of their seats.

- At this point the antagonist has no secrets.

At this point in the story all of the antagonist’s cards should be on the table. True, you don’t want an information dump where the protagonist, strapped across railway tracks, pleads for her life while the black cloaked villain rubs his gloved hands together, twirls his mustache, and tells her about the brilliance of his scheme.

But, still, no secrets. Perhaps the antagonist will taunt the protagonist by filling in the last little bit of the puzzle that lets the protagonist see how very high and dire the stakes are. Instead of simply the world being destroyed, he’s taking the galaxy out too!

Yes, I’m exaggerating, but at this point it isn’t just the protagonist that is going to win or lose it’s also every single one of her allies, and perhaps her family and extended community. Also, the protagonist may have allies the antagonist has killed and who need avenging. Not to mention that by this time we’ve become emotionally attached to the protagonist and those she cares about.

- On with the fight.

After the antagonist shows us his last card we’re all on the same page. We now know the antagonist’s true power as well as his true agenda.

We, the audience, quake. Even our new punched up self-aware protagonist can’t possibly beat this guy, he’s just too badass.

Then ... why does the protagonist seem so confident?

The audience is now worried that perhaps the protagonist was bluffing after all, that perhaps she really is all flash and no substance.

- Other kinds of endings.

Of course the story doesn’t have to end with the protagonist winning.

Keep in mind, though, that each genre usually has pretty clear conventions about how stories will end.

In a mystery story, if the sleuth doesn’t discover who committed the murder—or they do discover whodunit, but no one is ever brought to justice for the crime—then chances are that you’ll have plenty of grumpy readers who will make it a point of never ever reading another one of your mystery books.

In a Harlequin-type romance story, if the romantic leads do not live happily ever after (HEA) there will be hell to pay. A senior editor at Harlequin once told a conference I attended that they did break this rule once, and both the writer and publisher received hate mail. I kid you not!

The final conflict concluded, we wrap up the story by cashing out the final stakes. We do this by showing how the lives of each significant character have been changed because of the protagonist achieving the story goal.

Then, at the very end, the protagonist goes back to the Ordinary World and we see how the adventure changed her. Now, transformed, she does with ease tasks which were impossible before. For example, the protagonist can now best a bully, make difficult decisions, be a leader in the community, gain the elder’s respect, and so on.

Closing Thoughts: The Importance of Change

Let me stress that, although I do often talk about THE Three Act Structure, there’s really no such thing. There is no one monolithic structure that each and every genre story will exemplify. What I’ve written about is my own personal understanding of, distillation of, a structure I see in the overwhelming majority of popular genre stories.

Further, no single story will touch all these bases, and that’s fine. If I had to boil all the advice I’ve given over the years down to just one thing, it would be this: change is necessary.

Situations change, characters change. The mood of a scene changes. Readers—the audience—go from ignorance (Who is the villain?) to knowledge (It’s—drumroll—the mayor!). Without change, nothing dramatic can happen. And whatever else genre stories are, they should be dramatic.

Though, that said, there are only two actual rules in writing:

If you’re looking for places to share your writing, or encouragement to write every day, I publish a daily writing prompt here, here and here, and the folks over at Critters.org have helped many writers hone their craft.

That’s it! Thanks for reading.

Note: While the version of the Three Act Structure I’ve presented here does agree with that put forward by many screenwriters, I’ve noticed some put the break into Act Three after the All Hope Is Lost point. I think the take-away from this is to, as always, do what seems right for you. For me, it seems most natural to have the break into Act Three come just after the Major Setback but before the All Hope Is Lost moment, so I’ve placed the Major Setback at just before the 75% mark.


I’d also like to note that, often, the Third Act will be quite short compared to the First Act. That way, once the hero breaks into Act Three it feels like one incredibly fast race to the Story Climax.