Writing, Memory Palaces And The Power Of The Bizarre 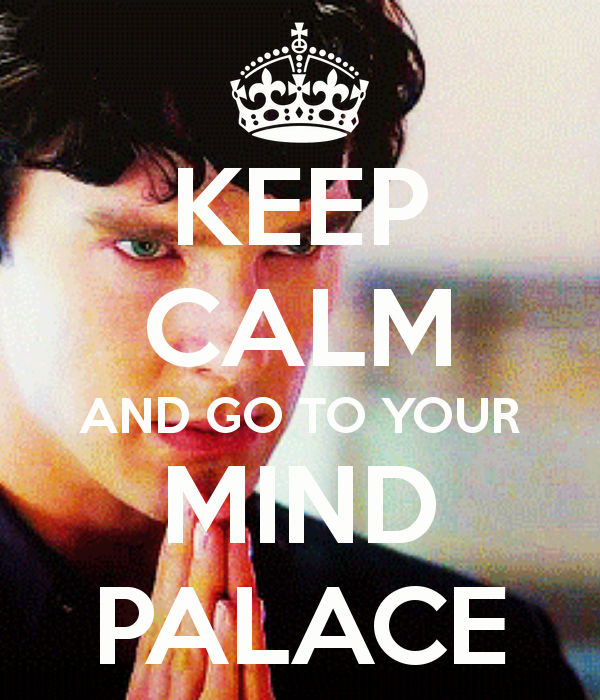 The other day I started reading “Moonwalking With Einstein” by Joshua Foer. Among other things, Foer talks about the art of memory and how to create one’s own memory palace.

You might wonder what on earth mnemonics and memory palaces have to do with writing. If so, fair question. Have you ever watched “Connections” with James Burke? Burke, an historian, takes an “interdisciplinary approach to the history of science and invention” and shows how various “discoveries, scientific achievements, and historical world events” brought about “particular aspects of modern technology.”

Sound interesting? It is! If you’re any kind of a history buff try to dig up a copy of the series.[1]

In what follows I’d like to take you on a vaguely Burkian journey to explore what connects the art of memory and the art of writing.

You’ve probably heard of a memory palace, these days it seems all the best detectives and serial killers have one: Hannibal Lecter; the latest incarnation of my favorite detective, Sherlock Holmes; Patrick Jane (The Mentalist) and I’m sure many others.

But what is a memory palace and—here’s the big question—does it work? Surprisingly, the answer seems to be a resounding “Yes!”

What Is A Memory Palace?

Improving one’s memory is an art, an art that was widely practiced in antiquity.[2]

A memory palace can help anyone remember vast amounts of information, anything that can be put into list form.[3] For example:

- Homer’s Iliad
- Your grocery list
- All the characters in the novel you’re reading, along with their occupations and distinguishing characteristics (tags & traits).
- All the characters in all the stories you’ve written. (Perhaps you’re not like me, but I find it easy to forget minor characters.)
- The birthdays of all your friends.
- Directions. (Yes, I know, these days there’s Google Maps. But what if you’re in a—cue ominous music—dead zone.)

If, like me, you’re just interested in memorizing all the characters in the books you read—and maybe your shopping list—then after an initial effort (setting up your memory palace and practicing to get a knack for it) you’ll be set. You might not be able to memorize a shuffled deck of playing cards but memorizing your shopping list in a matter of seconds will be within your grasp.

Actually, forgetting the darn thing will be the issue!

One technique that’s commonly used to build memory palaces is called the method of loci.

You then pick out significant places, or loci. In a house significant loci might be the mailbox, the front door, the welcome mat, the lamp, a rug, a closet, the dining table, the kitchen table, a door, and so on. Or, if you’ve chosen something like your walk to work, it could be your neighbors car (he always parks under the maple tree), the start of a path, driveways, the trees (shrubs, flowerbeds, etc.) in your neighbors yards.

“When desiring to remember a set of items the subject literally 'walks' through these loci and commits an item to each one by forming an image between the item and any distinguishing feature of that locus. Retrieval of items is achieved by 'walking' through the loci, allowing the latter to activate the desired items.” (Method of loci)

For example, the author of “Moonwalking with Einstein” describes constructing his first memory palace. The building he chose was the house he grew up in. He then selected various places within the house (the driveway, the front door, the piano, the lamp in the entryway, the dining table, and so on) to anchor vivid images which were associated with what he desired to remember.

One of the other items on the list was six bottles of wine. To make these more memorable he pictured them animated, each with its own personality. The different wines were arguing with each other over which was the best.

Over the years I’ve used this technique to memorize where I’d parked my car, but I never approached it in any systematic way and have never tried to keep more than two or three things in extended memory. Lately I’ve wondered why that was. After all, wouldn’t it be great to remember all the characters in the books I read, what they look like and the role they played in the plot? That would be fabulous!

So I’ve committed made it my goal to, not master the skill, but develop it to the point where I don’t have to write a shopping list, I can keep the items in my mind. (Yes, well, we’ll see. But you have to admit it would be wonderful!)

What Memory Palaces Have To Do With Writing

Here’s where I try and cash out all this talk about memory palaces and explain how the heck this could help one as a writer. (I’ve just started to think about this so what follows may be a bit rough around the edges.)

For those of us interested in selling our stories so we can do this crazy thing full time, one of the questions which concerns us and which I’ve talked about lately in my series on openings is: How can we grab, and keep, a readers attention?

In the past I’ve given several, related, answers. I’ve talked about the importance of suspense and how to create it, I’ve talked about narrative drive, dramatic irony and the virtues of raising a question in a readers mind and delaying the answer. (I’ve put links to a few of those articles, below) But I’ve always had the feeling that I’ve been dancing around something, something (arguably) central to who we are as humans.

At several points in “Moonwalking with Einstein” the author makes the point that the more outlandish the images one uses that, all things being equal, the easier they will be to remember. He writes:

“The Ad Herennium advises readers at length about creating the images for one’s memory palace: the funnier, lewder, and more bizarre, the better. “When we see in everyday life things that are pretty, ordinary, and banal, we generally fail to remember them, because the mind is not being stirred by anything novel or marvelous. But if we see or hear something exceptionally base, dishonorable, extraordinary, great, unbelievable, or laughable, that we are likely to remember a long time.””

“The more vivid the image, the more likely it is to cleave to its locus. What distinguishes a great mnemonist, I was learning, is the ability to create these sorts of lavish images on the fly, to paint in the mind a scene so unlike any that has been seen before that it cannot be forgotten.”

The hero of Lee Child’s books, Jack Reacher, is certainly memorable. The man is 6'5" tall with a 50-inch chest, and weighs between 220 and 250 pounds. (Wikipedia)

Stephen King’s breakthrough book, Carrie (his first published, though not the first he’d written) opens with a girl having her menstrual period for the first time in the communal showers at her high school. The other girls respond by berating her and throwing tampons at her.

At the climax of the story Carrie and Tommy (the only boy who ever cared about her) are drenched with buckets of pigs blood as they stand on stage in front of the entire school. One of the buckets hits Tommy on the head and kills him. Then Carrie goes on a rampage through town using her telekinetic abilities with all the finesse of Godzilla.

I love King’s work but one thing you can certainly say about Carrie is that it’s memorable.

Or take another novel, one not obviously a horror. In “Sophie’s Choice” Sophie Zawistowski tells Stingo that when her and her two children were taken to a Nazi concentration camp she was forced to choose which of her children would live and which would die. It was a horrid choice, an obscene choice, but one that was certainly memorable.

This got me thinking. Many of the stories I like the most—even stories like Faulkner’s “As I Lay Dying” or “Light in August”—have one thing in common: they are about events that are eminently memorable.

Honestly, I’ve only just started to think about this, about the extent that memorability of events should be up there with suspense (narrative drive, etc), at least when it comes to tempting readers to keep turning pages.

And what is it, exactly, that makes an event memorable? I’m going to come back to this in a future post but, for now, memorability seems connected to various things we’ve already heard a lot about:

That’s it for today!

Do you use a technique to aid in memorization? Have you ever used a memory palace? If so, please tell us what kind of information you found it easiest to memorize. Did you find that outlandish pictures/images aided in memorization?

2. To read more about this see “The Art of Memory” by Frances A. Yates.

3. “A recent world speed record for memorizing a deck of cards was 21.19 seconds, held by Simon Reinhard of Germany.” (Memory Sport)

Photo credit: This image came from "Psychological Hacks" over at imgur and was posted by (I love this handle -->) NotThe1. I encourage you to head over and read the article, it's a good summary of how to get started using your own memory palace.
Karen Woodward at 4:28:00 PM
Share