The Structure of a Horror: The Setting 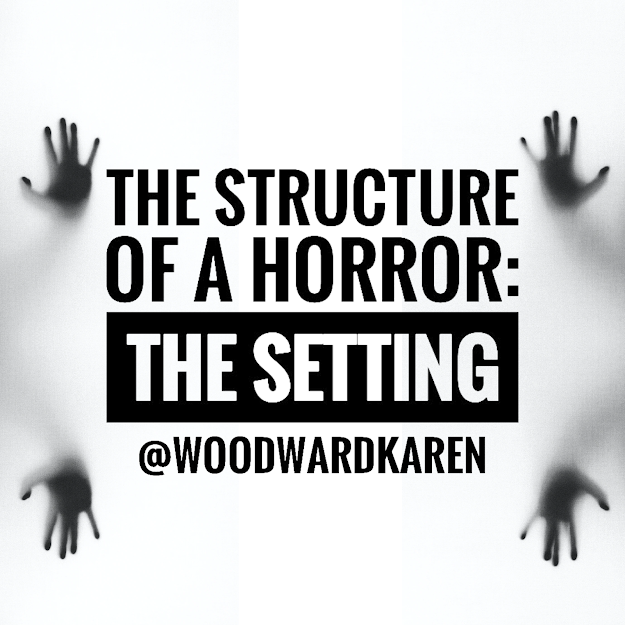 Certain things are true for all settings. If you want a sense of claustrophobic threat then small enclosed dark spaces are the way to go: caves, basements, dungeons. I talk more about setting in How to Write a Genre Story: Setting and Character (Part 3). Here I want to concentrate on settings specific to a horror, so let's talk about isolation.

In a horror story, it is good if the setting isolates the protagonists. But there are different kinds of isolation. For example, isolation can be physical (a remote location) or social/psychological.

Let’s look at a few examples.

In Cabin in the Woods (2011) the isolation is physical. College kids go off into the wild to spend a vacation together by a remote lake.

The Others (2001). In this movie, isolation was both physical and psychological. The children and their mother were isolated because the children had an unusual medical condition that prevented the curtains from being opened, as a result the house and its occupants were kept in perpetual twilight. This established and explained the dark mood of the movie and, at least in part, was a reason (though not an excuse) for the tragedy that occurred.

The Exorcist (1973). The protagonist in The Exorcist (Chris MacNeil) was not physically isolated from the rest of the world. Here the isolation is social/psychological. Chris is isolated by her daughter, Regan's, bizarre behavior and her belief that Regan may be possessed. Chris is isolated even though she lives in a beautiful home in the midst of a busy city.

Setting and the impossibility of escape or rescue

On the topic of isolated settings, it is important to eliminate any implication that there is a possibility of escape or rescue. This is the case whether the protagonist and her allies are physically isolated or psychologically/socially isolated.

As I will discuss in the second part of this article, after the protagonist has her reality shattered and she realizes that, yes, monsters do exist, then she will either not be able to escape, or will try to escape and fail. But at some point between the midpoint and the end of the story the protagonist usually has a chance to escape. Perhaps not a very good chance, but a chance. If she doesn’t make it then she will lose everything.

I think a classic progression is that, at around the All Hope is Lost point right before Act Two closes the protagonist either tries and fails to escape, or tries and fails to kill the monster. Which brings us to the very last scene, the most intense part of the story: the Climax.

There are as many different kinds of horror movies as there are writers, but I think what their final goal is tells a lot about a character. Is it to escape (and killing the monster is an optional extra) or is it to sacrifice themselves to kill the monster so their friends and loved ones will be safe?

Of course, just because the protagonist decides to sacrifice herself doesn’t mean she will die. I know that Edge of Tomorrow isn’t a horror (it’s more action, science fiction and adventure) but in that movie the protagonist, Cage, is convinced that if he tries to take out the Big Bad that he will die regardless of whether he succeeds. But, of course (spoiler!) he lives and, to their credit, the writers make sure that ending is plausible.

A jump scare is:

“...a technique often used in horror films and video games, intended to scare the audience by surprising them with an abrupt change in image or event, usually co-occurring with a loud, frightening sound.” (Wikipedia)

Jump scares are unique to the horror genre. And, although they are a bit cheesy, I think they can be done to good effect.

It’s sometimes a good idea to throw in a ‘fake out’ scene around the time when the audience expects the first monster attack but just before that happens. This is where things are tense, we’re expecting a monster to attack but instead a black cat jumps out of the darkness, hisses at her and runs away. (Granted, it is much easier to do a jump scare on a screen than on the printed page!)

I’ve watched more than one horror movie that employed a scene like this to great effect, at least judging from my reaction. Usually it occurred right before the first violent episode of the film. It was a ‘fake out’ and then, almost before I finished laughing and feeling silly, something nasty happened to one of the characters and I wasn’t prepared. Jump scares are effective.

Have an Endearing Scene Early On

I've left the most important thing till last. In a horror story the likelihood that your protagonist is going to fail in her quest and die horribly is quite high.

Often, the protagonist is given a mini-story in the beginning, one that reveals her true nature. This mini-story can be spread over the first 25% of the story (Act One, The Ordinary World). We, the readers, identify with and (ideally) are charmed by the protagonist as we watch how she lives her life.

In the first 10% or so of the movie the protagonist and her friends and allies often have some sort of good-natured rivalry, there is some minor conflict that lays bare the group dynamic. We find out who is crazy, who is intelligent, who has a heart of gold, who is willing to take advantage of the person with the heart of gold, and so on.

That's it for today! Thanks for reading. And, as always, good writing!