5 Necessary Characters in a Romance Novel 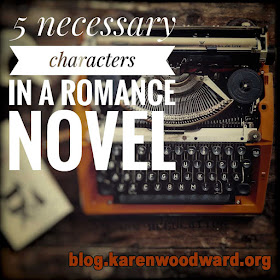 There are certain characters that show up in, for example, an adventure story. There is usually a love interest, a sidekick and a mentor (to name a few).

Similarly, in a romance story there are certain characters a writer needs to help keep the plot moving, to keep the tension escalating.


If we just had the protagonist meet and fall in love with the antagonist, we wouldn't have much of a story! We need a third person to come in and break this up, to introduce conflict.

The rival is someone who is either in love with either the protagonist or antagonist or who pretends to be (perhaps they aren't truly in love, he just wants the protagonist's money, or he desires the influence such a union would bring). He or she is there to create discord, for reasons of his or her own.


Characters can be divided into ‘helpers’ and ‘harmers’ based on how they relate to the protagonist.

You want a character who is close to the protagonist and who encourages her to give the antagonist a second chance, this gives her a reason to tell her friend all the reasons why they could never be together. The friend can also comfort the protagonist when she is in relationship agony, give her a shoulder to cry on.

Similarly, you want someone in the protagonist’s life to say: He’s not good for you, kick him to the curb! Keep in mind, though, that the worst friend and the best friend can be the same person -- as so often happens in real life. Though often the character who tells the protagonist that the antagonist isn't any good for her is a family member, often a mother or sister.

Granted, External Need itself isn’t a character, but a character can embody, can represent, the external need.

In jane Austen's, Pride and Prejudice, the external need is embodied in Elizabeth Bennet's father. Elizabeth and her sisters need to marry before their father dies. If they don’t, they will be penniless. That sets up the impetus, the external need for Elizabeth to find a husband. He is the ticking clock that drives the story. By the way, if you haven’t read Pride and Prejudice I would encourage you to! It is a lovely story.

Here’s another example: Let’s say our protagonist and her best friend are in a bar. The best friend bets the protagonist she can get the phone number of a cute guy, first. It’s a competition. That's a mild external need, but it sets up a reason for why our lovely protagonist would go in search of companionship.


People lie to each other all the time and also to themselves.

I hope that’s not too negative! But, you know we do! I know I need to exercise more but I tell myself: You’re having a good writing day, you can exercise tomorrow. Instead, go for a long walk, that's almost the same thing. (It isn’t.)

In a lot of stories -- especially romance stories -- there is a secret keeper and a truth teller. These can be the same person.

You need someone your protagonist can tell her secrets to -- or thinks she can. You could add conflict to the story by having the friend betray the protagonist's trust. This could be intentional, coerced or a complete accident.

You also need someone who -- maybe around the All Hope is Lost point -- is going to tell the protagonist the truth. The protagonist -- like all of us, lies to herself about something -- something important.

(See my article: A Story Structure In Three Acts.)

The Truth Teller doesn’t destroy the protagonist's illusions lightly, but at some point she tells the protagonist the truth. And, as hurtful as that can be, it helps the protagonist get beyond the All Hope is Lost point. By the way, that's just an example, you could do this at any major turning point in the novel.


The Mentor is often someone who has memories of someone dear to the protagonist who has passed away.

For instance, and I KNOW I use this example more than I should, but in, Star Wars: A New Hope, Obi Wan Kenobi has memories of Luke’s father.

Memories are important, especially if they are shared. It is difficult to have a better mentor than Gandalf. And Gandalf shares many memories with Bilbo and Frodo, and -- because of his great age -- has memories of many who have passed away.


This isn't a character, but -- whatever kind of story this is -- the protag and antag need to become better people by the end of it. For example, at the beginning of Pride and Prejudice, the lovers both have pronounced flaws. Elizabeth was prejudiced and Darcy was prideful.

At the end of Pride and Prejudice, Elizabeth was less prejudiced and Darcy was less prideful.

Simple, right? Simple is good! If a story is simple, clear, concise it is also easy to understand and read.

If you like my content please consider supporting me on my Patreon account. If you support the blog for just one dollar a month I'll send you my book, "The Structure of a Great Story."

Thanks for reading and I'll talk to you again soon! :-)

How to Write a Murderously Good Mystery: The Major Characters, by Karen Woodward

How To Write Characters Your Readers Will Love: Character Checklist