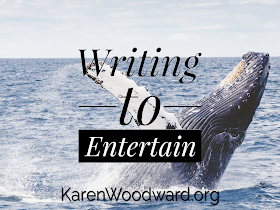 I’m going to pick up the thread of my last blog post where I talked about two things that drive us to write: First, the desire to communicate. This is the desire to share ourselves, our thoughts, our souls, with others. Second, the desire to entertain.

Today I cash out what exactly I mean by entertainment and look at how, as writers, we can entertain our readers. The answer: To evoke a reader's emotion, the reader needs to identify with the character. Which means she has to have clearly defined goals, obstacles to those goals, she needs to have something to lose and something to gain, and there needs to be some sort of urgency.

In short, eliciting emotion has everything to do with story structure.

Entertainment: The Evoking of Emotion


Most readers want to be entertained. To entertain another person is to evoke their emotions. Even in some of Agatha Christie’s more cerebral whodunits there was the sedate emotion of curiosity.

Stephen King writes for many reasons but one of them is to entertain others, especially his wife. The following passage is from his book, On Writing:

“When I write a scene that strikes me as funny (like the pie-eating contest in “The Body” or the execution rehearsal in The Green Mile), I am also imagining my I.R. finding it funny. I love it when Tabby laughs out of control—she puts her hands up as if to say I surrender and these big tears go rolling down her cheeks. I love it, that’s all, fucking adore it, and when I get hold of something with that potential, I twist it as hard as I can. During the actual writing of such a scene (door closed), the thought of making her laugh—or cry—is in the back of my mind. During the rewrite (door open), the question—is it funny enough yet? scary enough?—is right up front. I try to watch her when she gets to a particular scene, hoping for at least a smile or—jackpot, baby!—that big belly-laugh with the hands up, waving in the air.”


Making someone else feel good—or feel anything for that matter!—is a thrill. Seeing them laugh or even smile. Seeing them tear up, it’s ... well, as King says, I just love it. It’s a high.

And if you give people a story that makes them laugh and cry, love and hate, they will think their time well-wasted.

But how does one do that? How does one manipulate a reader’s emotions?


The question of how to evoke a reader’s emotions has defined my writer’s quest for most of my adult life. I want to write a story my father would have loved so much he would beg me to tell another.

Being able to make another person laugh is a valuable skill. Being able to make everyone within earshot hang on your every word has always been advantageous. Even before we had currency, travelers who could tell engaging stories bartered their skill for food and lodging. (In fact, this still happens. My friend was nearly killed on her last vacation—she’s fine now—and, in her words, ‘ate out on that story for a month’!)

What entertains us? You might think that the obvious answers are: sex, violence, death, and so on. And that’s probably right as far as it goes but I think it misses the point.

If I showed you the picture of someone who had been brutally murdered, my guess is that you would not be entertained. In fact, you’d likely be vaguely nauseous and not at all happy with me.

But, yes. For obvious reasons death interests us. A few days ago a friend called to tell me his dog, Zeus, had passed away. I had walked Zeus for years and, of course, had become attached. We both cried and reminisced. But then I asked: How did he die? That mattered to me. As it happens, he died peacefully in his sleep at the end of a long life. I took some solace in that. But I would have felt very different if, say, he had been hit by a car.

Yes, we slow down to gawk at the van with the crumpled front end on the side of the road, but what question do we ask: What happened?

I believe that humans aren’t interested in death as much as we are the story behind it. We want to know: Why? When? What? Where? How? We don’t want that horrible thing to happen to us. We think if we know, maybe we can avoid it.

Going back to something I touched on a moment ago, if I showed someone—let’s call her Beth—a picture of a gruesome murder, I doubt she would be happy with me. The picture itself isn’t entertaining. But Beth would be very interested in the answers to the following questions:


Reading this, putting myself in Beth’s place, it isn’t the photograph of the dead man that entertains me, it is that one of my goals is put in jeopardy: keeping myself and those I care about safe. It is that automatic, vicarious, sense of danger that puts all my senses on high alert.

These are also the kinds of questions we ask when we’re writing a story.

Beth’s goal: To protect herself and her family from the killer.
The opposition: The killer.
The Stakes: The lives of her family.
Urgency: If the victim lived next door and was killed a few hours ago, then the situation is urgent.

My point is that entertainment isn’t static, it comes from the structure itself, from the arrangement of the many parts.

Today I would like to share a link to one of Dwight V. Swain’s excellent books, “Creating Characters: How to Build Story People.” I bought this years ago and it has helped me enormously. Here’s the blurb:


“The core of character,” he [Swain] says in chapter 1, “lies in each individual story person’s ability to care about something; to feel implicitly or explicitly, that something is important.” Building on that foundation—the capacity to care—Swain takes the would-be writer step-by-step through the fundamentals of finding and developing [characters].

That’s it! I hope you could make some sense of my ramblings. NaNoWriMo is starting soon! My next post will be on Halloween, Monday, October 31 and then I will post every single day in November, outlining a key scene in a novel. So, if you’re NaNo-ing this year, swing on by!