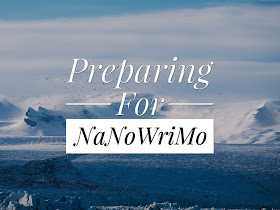 Every day in November I’m going to lay out the structural bones of a crucial story scene.  I'll then break this scene down for three genres: Action, Romance, and Mystery. Then I'll talk about the different requirements of each. Today I'm kicking things off by talking about what we can do to prepare for the insanity that is NaNoWriMo.

At least, that’s the plan! This is going to be an adventure for me as well since, over the month of November, I’ll be blogging a book, only a non-fiction one. That’s something I’ve never done before!

My hope is that my daily blog posts will provide you with a seed, a start, something to hang your story ideas around—if you want it. Folks have been writing stories for millennia without all this explicit talk of story structure, so if you don’t feel you want or need it, that’s great! Go you!!

But, if you’d like to get an idea regarding what you might want to write on any particular day, or if you want to read something that might help get you started, then please drop by, pull up a seat and let’s write! :-)


Here are a few things to consider as we head into the month of November (I expand on each of these, below):


How many days per week do you want to write?

For instance, you might want to plan on writing six days a week so you can have one day of wiggle room. Life has a way of derailing even the best laid plans, so giving yourself one day off a week isn’t a bad idea. That would give you 26 days to write 50,000 words which means your word count per writing day would be 1,924 words. This is what I did when I participated in NaNoWriMo and it worked out well.

On the other hand, if you plan on writing every day, your word count per day would only be 1667 words.

2. What Point of View Will You Write From?

If you choose to write from the third person perspective, then although one character will be the protagonist/hero, you will often have multiple viewpoint characters. For instance, many romance stories involve two viewpoint characters—the two lovers—and alternate their viewpoints every second chapter. Generally speaking, the point of view you open your story with will be that of your protagonist.

3. What is the Core of Your Story?


Generally speaking, a story is about a person (the protagonist) who wants something desperately but is repeatedly prevented from acquiring it by a person/force (the antagonist). Finally the matter comes to a head and the protagonist and antagonist face off in a final confrontation that will settle things once and for all.

If you would like to read more about story structure, here are a few articles:


Let’s start thinking about our characters:


Here’s the most important question of all: What does this character want more than anything else? This is important because it determines the story question that everything else revolves around.

The character's main desire could be something your character doesn't know they want. For example, in the movie Titanic, Rose wanted freedom more than anything else, though I'm not sure she was aware of this at the beginning of the story. On the other hand, Frodo knew exactly what he wanted: to return the One Ring to Mordor.

Here are additional questions that can help you get to know a character:


Let's take a look at what Shawn Coyne has to say about genre:


"A Genre is a label that tells the reader/audience what to expect. Genres simply manage audience expectations. (The Story Grid)"

If you're writing a love story then your readers are going to expect a first meeting between the lovers, a confession of love, a first kiss, a break-up, and so on. (See: 6 Scenes Any Love Story Must Have)

In this sense a genre is a bit like a promise you give your readers. If your title is, "Murder at Whitemill" and the back blurb identifies it as a cosy then no matter how inspired your prose your readers are going to come for you with pitchforks if, say, no murder occurs or no one is brought to justice for the crime.

This is why it's important to know which genre, or genres, you are writing in and what the conventions of that genre are. That is, what readers of that genre will expect of your story.


What is the setting? Where do the events of the story take place?

The world of the adventure (this includes both the Ordinary and Special Worlds) is sculpted by the writer to provide a crucible for the protagonist. The setting is a cauldron, a crucible, designed to test the main character’s strengths and force him to face, and overcome, his weaknesses. Or, if it’s a tragedy, to fail and die.

Rather than go into this now, here's a post I wrote on this topic: Mind Worms and the Essence of Drama.

See also:
How To Give Your Character Meaningful Flaws
The Key To Making A Character Multidimensional: Pairs of Opposites


If thinking about all this makes you hyperventilate, don’t worry about it! NaNoWriMo is about writing a zero draft, so it is about creativity and discovery.

I think the object of NaNoWriMo is to get as much of your story developed as possible in the month of November.

If you develop a plan for your story, and begin implementing that plan, then you’ve won in the sense that you've pushed your story forward. If participating in NaNoWriMo gets you to write even one word more than you would have otherwise then, in my books, you’ve won!

Every post I pick a book or audiobook I love and recommend it to my readers. This serves two purposes. I want to share what I’ve loved with you, and, if you click the link and buy anything over at Amazon within the next 24 hours, Amazon puts a few cents in my tip jar at no cost to you. So, if you click the link, thank you! If not, that’s okay too. I’m thrilled and honored you’ve visited my blog and read my post. :-)

For a different perspective on NaNoWriMo here is the excellent, No Plot, No Problem!, by Chris Baty, founder of NaNoWriMo. From the book blurb: "Chris Baty ... has completely revised and expanded his definitive handbook for extreme noveling. Chris pulls from over 15 years of results-oriented writing experience to pack this compendium with new tips and tricks, ranging from week-by-week quick reference guides to encouraging advice from authors, and much more."


That's it! Enough preliminaries and preparation! Got your writer's cap on? Awesome! Know what your character wants above and beyond all else? Excellent! I'll talk to you tomorrow. :-)
Karen Woodward at 2:36:00 PM
Share