Be Fearless: Make Your Characters Real 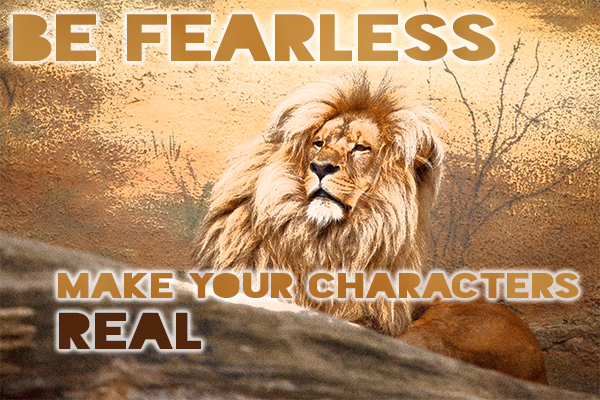 As I mentioned last week, I’ve been overly concerned with what others think about my work, letting it paralyze me at times. This week I want to talk about the importance of knowing oneself and infusing one’s unique perspective into one’s work.

The writer immerses herself in the world to, in part, develop her unique perspective on the world.

“One of the reasons writers are so much more interested in life than others who just go on living all the time is that what the writer doesn’t understand the first thing about is just what he acts like such a specialist about — and that is life. And the reason he writes is to explain it all to himself, and the less he understands to begin with, the more he probably writes. And he takes his ununderstanding, whatever it is — the face of wealth, the collapse of his father’s pride, the misuses of love, hopeless poverty — he simply never gets over it. He’s like an idealist who marries nearly the same woman over and over.” [1]

Writers are both stubborn and biased. We have our own questions, our own fears, our own concerns. Certain things mystify us and we are driven to unravel these mysteries even as we recognize the impossibility of such a task.

Paley’s words connected with me like a swift punch to the solar plexus and I realized a truth I’ve been ignoring: each writer’s work is unique because they—a person unlike any other—have given birth to it.  It has grown from the soil of their own concerns, their flaws, their unique worldview.

This is going to seem like a digression, but hold on.

I read an inspiring post today, “The Secret Behind Making Me Care About Your Characters,” by Chuck Wendig. In it he wrote:

“When I talk to you about your character, and you start to tell me, “Well, she has to find the DONGLE OF MAGIC to fight the WIZARD OF BADNESS and then she tames HORBERT THE MANY-HEADED DRAGON,” I immediately start to cross my eyes. I emit drool. I have a small seizure and then fall into a torpid grief-coma. Grief over what you’ve done to the human condition.

“And what you’ve done to the human condition is ignore it utterly.”

“A character doesn’t care about the WIDGET OF MAJESTY or the GIZMO OF FLARNIDONG unless those things suit something altogether more personal. Meaning: the character cares most about things personally relevant to the character. Not global, galactic, kingdom-wide concerns. But concerns about that person’s intimate sphere of influence.”

“Characters care about family, friends, jobs, love, hate. If they care about money or power, it’s because they see it as something they need personally. If they have larger, grander principles, those principles must be rooted in something intimate to the character.”

“We don’t sympathize with Luke’s galactic ambitions. We sympathize with him wanting to get off that [...] hillbilly planet. We totally grok him wanting to be something greater than he seems to be — the desire to stop being some blue-milk-slurpin’ sandfarmer and become the last of the Jedi, well, shit, who doesn’t want to accelerate past our seemingly mundane destinies?

“And it’s from this — from the part where the characters cleave to their personal goals, ideas and problems that we see them start to make changes.”

“[W]e look for things we understand. (And here may be the truest exploration of “write what you know” — it’s less about the facts and data and details and more about the authenticity of the human experience that you should draw upon. You don’t know what it is to karate kick a yeti, but you do know what it is to suffer loss and lies, to want love and experience hate [...].”

Although Chuck Wendig goes on to make a larger point about character versus plot, what he says right here, in the excerpts I’ve provided, nicely echoes Grace Paley’s point.

In a way, each of us is trapped inside our own skin, locked into one perspective, one worldview.

In this light, then, perhaps one of the roles of a writer is to know our own mind, our own questions, our own fears, our own puzzlements, with such thoroughness that we infuse this understanding, this perspective, into our writing. Further, we want to do it so successfully that, for a time, our readers feel themselves transported into another worldview.

Which, incidentally, doesn’t narrow what we can write about. Just the opposite. By getting in touch with (for instance) our own fear of failure one can craft innumerable believable characters, whether they want to build a rocket to Mars or get through their child’s first day at school.

That’s it! Write your worldview, write your soul. I’ll talk to you again next week. In the meantime, good writing!

1. This quotation is from a lecture Grace Paley gave in the 1960s entitled, “The Value of Not Understanding Everything.” The transcript was included in the volume “Just As I Thought.” I came across these quotations on the site Brain Pickings (brainpickings.org). Specifically, through an article by Maria Popova, “The Value of Not Understanding Everything: Grace Paley’s Advice to Aspiring Writers.”
Karen Woodward at 11:07:00 AM
Share