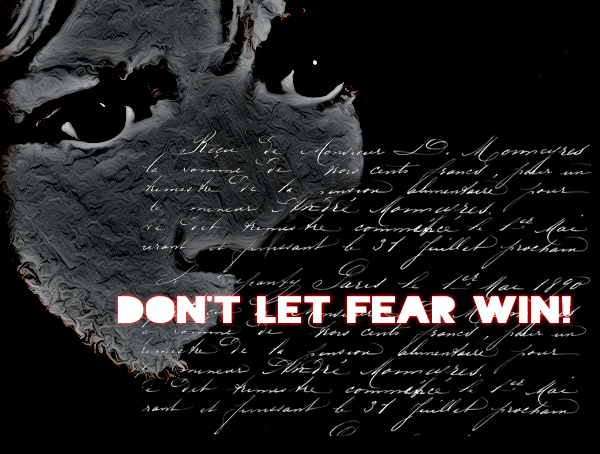 We can’t do everything in the time allotted to us, but we can do the important things. We can pursue our passions.

I think this is something that we, as writers, need to take to heart. (And by “writer” I mean just that--people who write. One does not need to be published to be a writer.)

For the past while I have deeply regretted letting fear rule me and NOT writing a particular story.

But please don’t misunderstand. There are many reasons to NOT write a story. (Stephen King talks about a few of these in “On Writing.”) Perhaps you’ve only got hold of a part of the story so you need to wait for the rest, for a complete idea. After all, it took Stephen King a few decades to finish the story we now know as “Under The Dome.” And so on.

There are good reasons to delay setting pen to paper. Fear, though, is NEVER a good reason. (Remember: just because you write a story doesn’t mean you have to publish it!)

Back at the beginning of my journey as a writer, back before I published anything, I had this idea for a story: From the first person perspective, have each of three characters tell the reader about an event that happened to all of them at the end of grade seven. They had been camping in the woods, camping with a fourth person, a person who died that night. Each of the first person accounts would differ and, through those differences, the reader would come to know the characters.

By the three-quarter point I wanted the reader to have formed certain conclusions about what happened that night.

The last quarter of the story would be written in objective third person (fly on the wall perspective) and would be a recounting of the event itself. Further, the ending would introduce a twist, something that would shatter one of the reader’s fundamental assumptions, but in a way that made sense.

At least, that was the plan!

I ended up never writing the story. Here’s what happened:

A friend asked what the story was about. These days I have a rule: Never EVER discuss a WIP before the first draft is complete. At that time my story was still in the idea stage. Anyway, I told her.

She said, “Oh no! You can’t do that. You can’t switch the POV from first to third at the end and you absolutely can’t have three different first person accounts.”

And then she gave me a look that seemed to question my sanity!

Please don’t misunderstand. I now think my friend was correct, having three different first person narrators would have been extremely off-putting for readers (to say the least!). But that was in the days before I knew about free indirect voice. If I had written the story and put it away in a drawer I could have gone back to it as a more experienced writer and turned the first person accounts into third person accounts but without losing the sense of intimacy the story required.

As it was, my fear made me rethink the entire story. Where before I was excited and eager to begin now I questioned the whole enterprise. I spent so much time rethinking the story that I decided I wasn’t mature enough as a writer to attempt the project and put it to the side.

Here’s my advice: Even if you’ve gotten hold of an idea for a story you think you’ll never be able to publish, if it’s in your heart to write it, if you’re passionate about it, then go for it! Write it.

Nowhere is it written, there is no commandment scrawled on stone tablets, that you have to publish every story you write.

Granted, you might NOT want to take months, or even years, out of your life writing a book length work you don’t think will be publishable. Point taken. But I believe that every longform story--the main plot line at least--can be condensed into a shortish story. Or at least a novella.

The other day Adam Savage interviewed Andy Weir, author of runaway bestseller “The Martian,” for his podcast. It’s fascinating and I urge you to listen. Anyway, Adam mentions the book has a POV shift from first to third person halfway through!

As Stephen King says: It’s all on the table. Everything. Try it out. If it doesn’t work then don’t send the story out into the world. That one will just be for you. I’ve got a few stories like that and, honestly, they’re some of my favorites!

The lesson I’ve learnt (or at least I hope I have!) is: Don’t let fear stop you from writing the story that’s in your heart to write.

I’ve decided I AM going to write that story and, in tandem with writing this blog post, have completed a (very rough!) first draft. Even if the story never sees the light of day, I’m putting this in the win column because I conquered my fear. And fear can lead to writers block--or at least it can if you’re me. (grin)

Don’t let fear get the upper hand. Write the story!

Talk to you again next week. In the meantime, good (fearless) writing!
Karen Woodward at 12:09:00 PM
Share