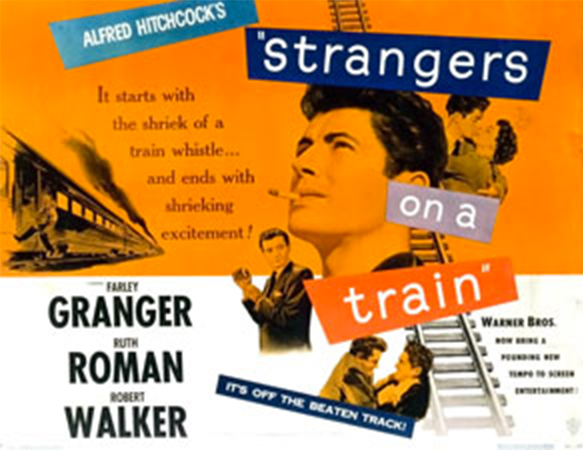 Last week I binged on Patricia Highsmith’s work. Specifically, “Strangers on a Train” and “The Talented Mr. Ripley.” As I read, I recognized (or thought I did) a theme running through the two stories. If I had to put it into words, I would describe it like this: the secrets we keep destroy us by alienating us from the people we care about most. The-things-we-cannot-tell eventually transform us into dark twisted creatures our initial selves would have loathed.

Excellent books. (And excellent movies as well. Alfred Hitchcock adapted Strangers to the big screen in 1951 and The Talented Mr. Ripley was adapted by Anthony Minghella in 1999.)

After reading Highsmith’s work I watched season nine of the TV show Supernatural. What do you think I saw? The writers were using the same theme: the destructive nature of secrets. But I guess that’s the way of things, once you notice something in one place you notice it everywhere.

Sure, there were differences. Highsmith uses the crime of murder as the secret which must be kept, but the secret itself could be anything. In Supernatural the secret was (spoiler alert) that Dean had tricked Sam into letting an angel possess him. Sure Dean’s motives were pure (he wanted to save Sam’s life) but he knew that wouldn’t matter to Sam. If Sam found out he would demand the angel leave and, since the angel was the only thing keeping him alive, Sam would die.

It’s the same dynamic as in Highsmith’s work.

Supernatural: If Dean doesn’t keep his secret he will lose the person closest to him.
Strangers on a Train: Guy Haines is convinced that if he doesn’t keep his secret that his fiancee will leave him. (The secret was that a stranger he met on a train killed his wife and is threatening to frame him for the murder unless he kills that person’s stepfather.) And Guy is probably right, she would leave him if she knew.
The Talented Mr. Ripley (the movie): Ripley is a con artist who drifts into a career as a murderer. What sends him over the edge is the secret he is forced to keep.

In all these stories, the secret-that-must-be-kept severs the protagonist from society; it sets him off as ‘other,’ as beyond the pale. It is their wound, the thing the protagonist must fix yet can’t.

The writers of Supernatural used a secret-that-must-be-kept to create distance between Sam and Dean, the two protagonists, to sow suspicion in Sam’s heart. Sam knew something was off, he knew that his brother wasn’t being honest with him. This created tension between the brothers, tension which built until the next crisis hit and shattered their already damaged relationship (of course they’ll patch things up, this is Sam and Dean!)

Joe Bunting (The Write Practice) has a practice exercise at the end of his posts; I hope he doesn’t mind, but I’m going to adopt that idea. I’m not sure I’ll have a writing practice section at the end of all my posts, but I’ll do it today and see where it goes.

Chuck Wendig publishes a writing exercise every Friday, sort of a mad lib exercise that injects a bit of randomness, of uniqueness, into a writing prompt. Here’s a suggestion, something I’ve done:

1. Head over to Chuck Wendig’s site and generate your own writing prompt (this week the story will be inspired by a randomly generated title). Here’s the link: The Random Title Jamboree. The title I came up with was: The Executioner’s Brains. Sounds like it’ll be a horror story.

2. Write a story, inspired by the title generated in (1), that explores the destructive nature of secret keeping. (Or not! Pick your own theme.)

3. I encourage you to post your story on your web space and then leave a link in the comments on Chuck Wendig’s post (I’ve given the link, above). If you like, leave the link in the comments, here, as well. I’d love to read what you come up with. :-)

A Change In My Blogging Schedule

I’ve decided to focus more on writing fiction than writing about fiction, and on encouraging others to join me. I’m not suggesting you need my encouragement—I’m sure I need yours more than you need mine!—this is just where my muse is leading me. I’ll be cutting back my blog posts to once a week (on Wednesday) but I hope to begin publishing writing prompts again. Perhaps I’ll emulate Chuck Wendig and post a writing prompt every week, but perhaps on Monday rather than Friday.

That’s the plan at least. But you know what they say about the best laid plans. ;)