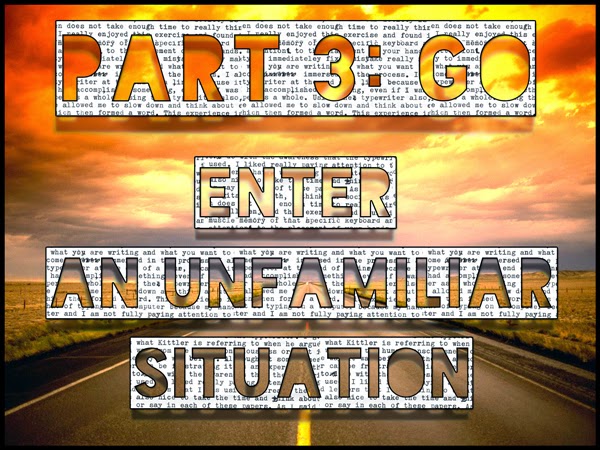 Today, I continue discussing Dan Harmon’s take on story structure. In the first post in this series (see: Dan Harmon On Story Structure) I gave an overview and went into the origin of Harmon’s system. Head over there if you have questions, or you’re wondering why this looks a bit like Joseph Campbell’s book “The Hero With A Thousand Faces.”

3. Crossing The Threshold, Entering the strange, new, world of the adventure.

Here the protagonist takes a journey, a dangerous crossing, into the unknown.

“What's your story about? If it's about a woman running from a killer cyborg, then up until now, she has not been running from a killer cyborg. Now she's finna start. If your story is about an infatuation, this might be the point where our male hero first lays eyes on the object of his desire. [...] If it's a coming of age story, this could be a first kiss or the discovery of an armpit hair. If it's a slasher film, this is the first kill, or the discovery of a corpse.” (Story Structure 104: The Juicy Details)

Harmon gives us what I think is a wonderful writing tool. He asks:

If you were going to make a movie poster for your story, what would it be? “What would you advertise to people if you wanted them to come listen to your story? A killer shark? Outer space? The Mafia? True love?” (Story Structure 104)

If you were reading a Werewolf story, chances are this (the 25% point) is where you’d discover Werewolves DO exist. Why? Because you’ve entered the strange and occasionally bizarre Special World of the Adventure. Here the rules are different and the protagonist is a fish out of water.

The Special World of the Adventure

In terms of Harmon’s/Vogler’s/Campbell’s system, The Special World is the lower, shaded, portion of the circle. (The Ordinary World is the unshaded upper half.) 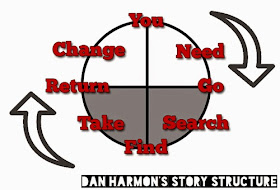 Harmon writes: “Neo wakes up in a vat of goo in a world ruled by machines. His ordinary world desire to be a hacker, to fight the system, is going to be put to the test.” (Story Structure 104)

Think of the movie, The Matrix. It’s hard to get more stark than the difference, the contrast, between the Ordinary World of our experience and the Special World of humans in caves vats being used to power the machines.

“Crossing the First Threshold is an act of the will in which the hero commits wholeheartedly to the adventure.”

According to Vogler any Threshold Guardian worth her salt will be able to inspire doubt and fear, will be able to cause the hero to question whether they’re the person for this particular job.

This has been a brief overview where I’ve chatted about the highlights of what Dan Harmon calls Part 3. I’ve written more about this stage of the story here: A Story Structure In Three Acts: Act Two.

That’s it! Next time we’ll look at the protagonist’s descent into chaos.
Karen Woodward at 9:13:00 AM
Share