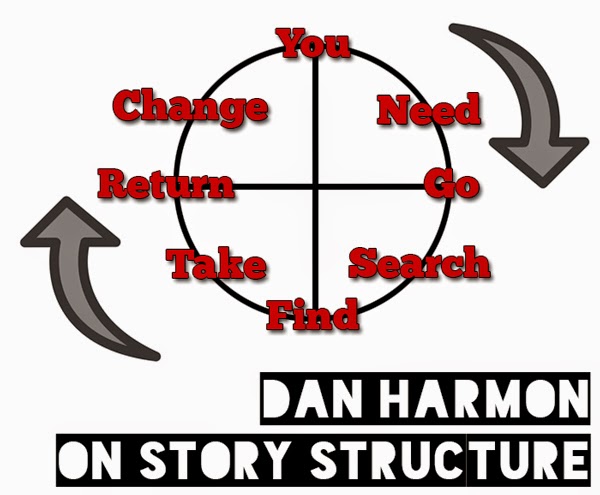 Yesterday a friend sent me a link to Dan Harmon’s series of articles on story structure. I had no idea Harmon was passionate about story structure, though I should have guessed.

In this article I barely brush the surface of what Harmon has to say, so I will be returning to this material in future articles. Or at least that’s the plan (knock on wood).

Here are the links to DH’s articles:

And those are useful books. I know, I’ve read them. Yes, okay, I read Joseph Campbell’s book a couple of decades ago and there was some head-scratching involved, but still. I say this because even though I’ve probably read most of the books on writing DH has, his way of looking at story structure is unique. Reading his articles gave me a new perspective on story, and that’s exciting!

Dan Harmon’s talk of rhythms, of drawing one’s audiences’ attention to certain patterns, gave me an ‘Ah ha!’ moment, a realization about something that had puzzled me: How to think of the gap between the Midpoint and the All Hope Is Lost beat. For some reason, that particular stretch of story, bridging it, was a bit of a desert trek for me.

I’ll talk more about that when we get there. For now, let’s take a barest of bones look at Dan Harmon’s story model:

When YOU have a NEED you GO somewhere SEARCH for it, FIND it, TAKE it, then RETURN and things CHANGE.

Too condensed? Here it is stretched out over the eight stages:

The Barest of Bones

It’s going to sound odd, but I suggest you read Dan Harmon’s last article (SS 106) first since it gives a nice, if dense, summary of his system. It’s a kind of whirlwind tour of his 8 steps. Do it now. Here’s the link: Story Structure 106: Five Minute Pilots.

What I want to do today is, rather than apply this structure to a 5 minute video (as Harmon does), apply it to a 4,000 word short story.

Ready? Let’s go! (Keep in mind that this is the condensed version)

The protagonist is comfortable in the Ordinary World, or at least he thinks he is. But, nevertheless, he wants/needs/desires something. Next, begin to change his circumstances and unleash the Call to Adventure.

2. Enter The Special World of the Adventure

Because of his need, the protagonist enters (GO) a new, unfamiliar, situation. While SEARCHING for what he wants, he adapts to this new situation.

The character FINDs what they were searching for.

The character claims their prize (TAKE) and pays a price. Their mission accomplished, the protagonist begins the long trek back home (RETURN).

The Big Bad rallies his strength and chases after the protagonist. When the two meet we have the final confrontation that decides whether the protagonist will return to his community with whatever he has taken. (Note: this doesn’t have to be an object.)

Show how the protagonist’s circumstances have CHANGEd as a result of their adventure. This is where the stakes get cashed out and we see how the journey, the adventure, has changed not only the life of the protagonist but the lives of everyone around him.

That’s the barest of bones. When I pick this subject up again, I’ll begin at the beginning and take an in-depth look at the first link in the chain: 1. YOU.

By the way, DH stresses that not every single stage must be explicitly present in every story. Sometimes (often) a story will condense one or more of the stages due to time or space constraints. After all, if we couldn’t do this then I’m not sure if we’d have many truly “short” stories anymore. Having said that, the order of the stages is important.

The Fractal Nature of Story Structure

I’d like to mention something I’ve been thinking a great deal about recently, the fractal nature of story structure. That is, each part of a story can mirror the structure of the entire story.

To put it another way, just as DH’s eight stages describe an entire story they can also describe a chapter or a scene or a paragraph. For example, here’s Dan Harmon’s story about "the guy whose soda turned out to contain poison”:

That’s it for today. Have a terrific rest of the week. If the mood strikes, try using Dan Harmon’s story structure to write a Dabble.

The articles in this series:

- Dan Harmon on Story Structure
- Part 1: Create A Protagonist Audiences Will Relate To
- Part 2: NEED - The Protagonist WANTS Something
- Part 3: Go - The Protagonist Enters An Unfamiliar Situation
- Part 4: SEARCH and ADAPT to the Special World
- Part 5: FIND - Meeting With The Goddess
- Part 6: TAKE - Take The Prize And Pay The Price
- Part 7: RETURN - Bringing The Prize Home
- Part 8 of 8: CHANGE The World