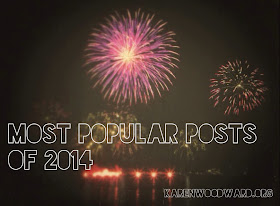 Happy New Year! I’m going to celebrate the upcoming new year by looking back at my most popular posts of 2014.

Coming in at number ten we have:

Agatha Christie is the best-selling novelist of all time and one of my favorite authors. I've spent many a night curled up in front of a roaring fire, cocoa close at hand, reading her familiar tales.

Although no one can write exactly like she did—nor would we want to. The goal of each writer is to develop their own voice—time and again I have wondered which elements of her stories contributed to her phenomenal success. I'm not suggesting she employed any sort of formula, but I believe there must have been certain characteristic regularities to her work that contributed to her becoming the most read mystery writer in the world. (Continue reading: How To Write Like Agatha Christie.)

9. How Michael Moorcock Wrote A Novel In Three Days

Yes! Moorcock actually did write many short novels (45,000 words to 60,000 words) in only three days. (Continue reading: How Michael Moorcock Wrote A Novel In Three Days.)

I had intended to continue this article on Moorcock, to make it a series, but that didn’t happen. That said, I think Moorcock’s method was similar to Lester Dent’s and I did write a five part series on Dent’s Master Story Formula. Here are the links:

8. How To Write a Terrifyingly Good Horror Story, Parts One and Two

Want to write a story chalk full with thrills and chills? A few months ago I reached a point in my WIP where I had to kill off one of my antagonist's minions and was curious what tips other writers had for creating a gross out scene. Then I thought: Hey! I should blog about this. That's how this post began, but it turned into a series on how to write a terrifyingly good horror story. Here are the links:

Did you know that, since 2001, James Patterson has sold more books than any other writer? Apparently 1 out of every 17 hardcover books sold has Patterson's name on it.

Regardless of what anyone thinks of Patterson's writing, there is no arguing with his popularity. So, how does he do it? Here are Patterson’s tips for writing suspenseful prose. (Continue reading: 7 Tips From James Patterson For Writing Suspenseful Prose.)

After years of writing, I've noticed certain things about myself, my writing routine, and I thought I'd pass them on in case you're one of those people who's a bit like me. Here are suggestions for ways to write every day: (Continue reading: 4 Ways To Write Every Day.)

5. How To Write A Murderously Good Mystery

Lets revisit one of my favorite topics and examine how to write an engrossing murder mystery. To do this I’m going to take an in-depth look at a classic: "The Guilty Vicarage: Notes on the detective story, by an addict," by W.H. (Wystan Hugh) Auden. Auden writes that the "basic formula is this: a murder occurs; many are suspected; all but one suspect, who is the murderer, are eliminated; the murderer is arrested or dies."

Generally speaking, mystery stories conform to the overall structure of a genre story, which is ... (Continue reading: How To Write A Murderously Good Mystery.)

Other articles in this series:

4. Jim Butcher On How To Write A Suspenseful Story Climax

Someone once said to me: The first few pages of a novel sell that novel, the ending of the novel sells the next novel.

Endings are important. If I like a book but hate the ending I probably won't read another book by the same author. (Continue Reading: Jim Butcher On How To Write A Suspenseful Story Climax.)

3. George R.R. Martin On The Art And Craft Of Writing: 9 Tips For Writers

Have you read George R.R. Martin's interview in Rolling Stone magazine? I was amazed and a little shaken by the depth of Martin's innate, intuitive, grasp of storytelling. All the more so because this wasn't an interview conducted with writers in mind. He didn't set out to give writing advice—at least, I don't think he did—but, nevertheless, the advice was there.

Here's what I've taken away from the interview ... (Continue reading: George R.R. Martin On The Art And Craft Of Writing: 9 Tips For Writers.)

One of the most difficult things about creating a book cover is selecting a font. I'll try Impact and maybe Engravers MT and then reach for Lucida and then ... you get the idea. It's a hodgepodge of guesswork. Eventually I'll trip over something that works, but there's got to be a better way.

1. How To Write A 'Choose Your Own Adventure' Story


That’s it! I’m looking forward to another year of blogging about writing. Have a happy, and safe, New Year!

Photo credit: I altered the photo and added text. The photo I used was: "Cannes - Firework 2014 (China)" by ludovick under Creative Commons Attribution 2.0.
Karen Woodward at 12:12:00 PM
Share