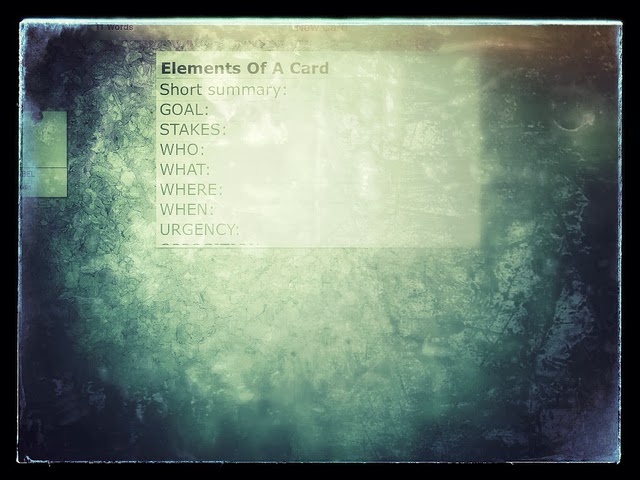 "The card system is your map and your guide; the Plot Points your checkpoints along the way, the 'last-chance' gas station before you hit the high desert; the ending, your destination." (Syd Field, Screenwriting)

I've been changing how I write. These days I use (virtual) index cards to create a detailed outline of my novel before I put pen to paper to create a first draft.

That said, I do write bits and pieces of scenes here and there, as the ideas come to me, so I have a feeling for my main characters' voices while I'm doing the cards.

Filling out index cards--approximately 56 index cards--will be familiar to just about anyone who has written a screenplay.

The first question I was asked after I explained this method to a friend was: That's too detailed. Are you nuts?!

But, hey, this is working for me (so far), maybe it'll work for you.

Before I go on, I'd like to mention that I'm not using physical index cards, I'm using the Index Cards app. I've been using this app for a few months now and can't recommend it highly enough. But one word of warning. I've had the program crash on me a few times, so I've learnt (the hard way) to back up my outlines. Be thou warned.

The Structure of a Novel

Although I love writing novellas--they are so much quicker--my first love is the novel, and I think this is also true for many readers. For my purposes, a novel is 80,000 (or so) words.

These cards aren't meant to act as a straight jacket, just an approximation. After all, I'm writing a novel not a screenplay. They are a tool I can use to expose the bones of my story and let me suss out the gaps, the enormous gaping plot holes. As many, many, writers have said, it's much easier to change an outline than to change a completed first draft!

Each sequence, like the story itself, will have a beginning, middle and end. In the beginning we introduce the characters and setting. Also, we might foreshadow at least a few of the conflicts to come.

In the middle we have conflict and try-fail cycles. Characters strive to achieve their goals and are thwarted. They devise new strategies and try again. They are thwarted again, and so on.

At the end there is a resolution. Either the character achieves their goal or they don't. Usually they don't. Stakes are raised (and clearly spelt out).

Each scene is a lot like each sequence. Each has a beginning, a middle and an end. In the beginning we establish the characters and setting, in the middle conflict is generated by characters striving for goals and falling short. And, at the end, though there is a resolution of sorts, most commonly the hero will not reach their goal, the stakes will be raised, and they'll have to try, try, and try again.

Elements of an Index Card: Scenes

Each index card is either a scene or a sequel. (Here are two excellent articles by Jim Butcher which explain scenes and sequels.)

If the index card is a scene, then here are the categories I use:

What happens in this scene?

Where does it happen? Indoors? Outdoors?
Is this setting interesting on its own? Does it have any significance to any of the characters? To the theme?

When does the action in this scene take place? What time of day or night is it? What date is it?

Why must this goal me accomplished now? If there is no sense of urgency, conflict is undermined.

What opposes the character's acquisition of their goal?

Elements of an Index Card: Sequels

Dwight V. Swain in his invaluable text, Techniques of the Selling Writer, writes that:

"A sequel is a unit of transition that links two scenes, like the coupler between two railroad cars. It sets forth your focal character's reaction to the scene just completed and provides him with motivation for the scene next to come."

Swain goes on to note that the functions of a sequel are threefold:

a. "To translate disaster into goal."
b. "To telescope reality."
c. "To control tempo."

I'm only going to touch on the first of these functions--turning disaster into goal--here.

So, if a particular scene is a sequel, then these are the questions I ask:

How does the viewpoint character--as well as the other main characters--react to the resolution of the previous scene? If the hero achieves his goal is he happy or is he devastated because it's not what he thought it would be? If he didn't achieve his goal, is he angry, resigned, depressed, emotionally devastated, etc, etc, etc?

Remember, this is unfiltered emotion. The hero is just reacting. (Although how a character reacts can tell readers an awful lot about your character.)

After your POV character (which for the sake of brevity I've been assuming is your hero/protagonist) stops reacting they need to figure out what to do. So they'll need to review their situation (what were the stakes?) and think of several things they could do next. For each possibility make sure the goal is clear, as is the opposition and the new stakes.

The main thing: Make the goal for each possible alternative scenario crystal clear.

The hero must decide. Which option the hero picks should be consistent with their strengths and weaknesses, who they are as a person. Which is just another way of saying that it should be plausible.

That's almost it. As I go through my cards I try to remember to ask myself these questions:

PS: I just listened to The Narrative Breakdown podcast and picked up these tips:

1. Surround your hero with characters that lack his/her particular strength.
2. Give the hero three rules to live by, whether stated or implied.
3. A catchphrase (Poirot: I do not approve of murder) can go a long way to communicating character.