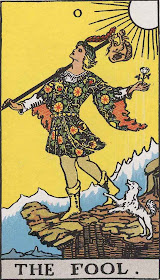 I thought I'd write about something a bit different today.

Years ago, an acquaintance told me she thought numbers had meaning. Although I didn't share her belief, I was intrigued. Next, she told me the meaning of numbers told a story.

A story! That did interest me and I scooted to the edge of my seat.

She laughed and told me the story and, though it was interesting and I promised myself I'd remember, I promptly forgot it.

This morning I went shopping with a friend who bought a deck of tarot cards. Later, while she was making coffee and puttering around her kitchen, I picked up the tarot cards and flipped through the major arcana, starting with The Magician.

At that moment my friend's story came back to me and I realized something. The meaning of the numbers from one to ten seemed to be a close analogy for something else: The hero's journey.

I'll lay out my reasoning below, do tell me what you think in the comments.

(Please keep in mind I'm not claiming numbers have meaning; in fact, I don't think they do. What interested me was the similarity of the one story to the other.)

The Hero And The Fool


Number 1: The thing itself without division or differentiation of any kind. Pure, raw, potential. (By the way, all my information about the meaning of numbers was drawn from the links on this page over at aeclectic.net.)

This is from at aeclectic.net.:


"... the Magician implies that the primal forces of creativity are yours if you can claim your power and act with awareness and concentration."


Hero's Journey: The Hero in the Ordinary World


The hero in the ordinary world is at the beginning of his journey. He hasn't yet claimed his power and does not act with awareness.

The hero is untried, untested; a diamond in the rough.

The hero has the capacity for great bravery, for acts of courage, but none of that has manifested yet. One day he may be able to slay dragons but that day is not today.

2. The Hero Starts His Journey


Number 2: Duality. Division. Instinctual knowledge. The energy of (1) gets direction.

Hero's Journey: The Call to Adventure

In this second stage what was metaphorical becomes literal. The hero literally gets a new direction with the call to adventure.

For example, Indiana Jones is asked to find the ark of the covenant (Indiana Jones and the Lost Ark), Joan Wilder must ransom her sister (Romancing the Stone), Frodo must destroy a ring of power (The Lord of the Rings).

As with the biblical story of Jonah, our hero may refuse the Call to Adventure at first, but, eventually, something will happen (in Jonah's case, being swallowed by a whale and stewing in gastric juices for a few days) to change his mind.

3. The Hero Enters the Special World


Number 3: The number three brings balance to the two opposites. One can also think of 3 as the child of 1 and 2; in this sense, 3 can be thought of as having been birthed by them. It is a newborn that needs nursing, developing.


Christopher Vogler, in his wonderful book, The Writer's Journey, puts it this way,


"It [the Special World] is a new and sometimes frightening experience for the hero. No matter how many schools he has been through, he's a freshman all over again in this new world."

Vogler also notes that "the Special World should strike a sharp contrast the the Ordinary World."

So here we have the hero entering a new situation, a new world, with different rules. It is completely unfamiliar. What used to be his strengths in the Ordinary World are weaknesses here and what were weaknesses are now strengths (think Alice in Wonderland).

To sum up: the hero enters a new world that is completely different.

4. The Hero Trains, Becomes Something New


The hero finds her legs in the new world, she learns how things are, is tested, finds some allies and makes more than a few enemies. Through her journeys, her trials and tribulations, she starts to grow into her own.

5. The Ordeal: The Hero Confronts His Nemesis And Loses Something


Number 5: Something is lost. This could be momentum, love, money, friendship, whatever, but something that was gained in (4) is lost. Also, though, one becomes stronger because of the ordeal.

The hero goes through the trial (usually) victorious. He loses something, but he is made stronger.

The is part of the wikipedia entry for The Hierophant:


"The negative aspect of The Hierophant is well illustrated by the myth of Procrustes. Procrustes was a man (or a monster) living in the mountains of Greece. He invited weary travelers into his home, washed the dust off their feet, provided a meal, and let them lie on his bed. If they were too big for his bed, he cut them to size. If they were too small, he stretched them to fit. At last, Theseus came through the mountains and accepted Procrustes’s seemingly kind offer. When Procrustes tried to cut him to fit, Theseus killed him, making the road safe. In this way, the Hierophant is like Freud’s superego. It shapes us, sometimes brutally. This shaping is necessary for us to become who we are." (Wikipedia)

If the hero never fights the monster, never engages it, the hero will never realize his full potential.

So here we have a confrontation, like what happens between the protagonist and the antagonist midway through a story, what Vogler calls the Ordeal. Because of the battle something is lost (in the case of Indiana Jones and the Lost Ark it was Indiana's freedom) and something is gained (he gets his lady love, Miriam, back).

(In the tale of Procrustes the Pitiless, although Theseus doesn't lose anything, many of Procrustes's other 'guests' do.)

Okay, that's it for today. I'll go through stages 6 through 10 on Monday.

Personally, I don't put any stock in numerology or the tarot, but I love stories and it seems to me that the cards of, for instance, the Rider-Waite tarot deck, tell a story. Also, I'm intrigued by the possibility they could be used to help us create our own stories.

In any case, since this blog is about anything and everything to do with story--anything that will help us create better, more inventive ones--I thought I'd share!

Photo credit: "RWS Tarot 00 Fool.jpg" by Pamela Coleman Smith (published 1909) via Wikipeida.org. This image is not under copyright in the US.
Karen Woodward at 3:05:00 PM
Share